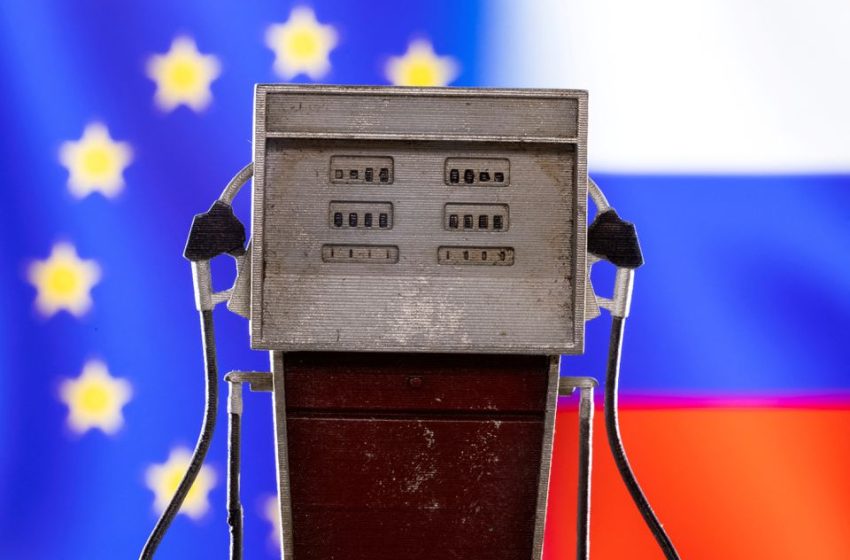 Model of petrol pump is seen in front of EU and Russian flag colors in this illustration taken March 25, 2022. REUTERS/Dado Ruvic/Illustration/File Photo

Why Russian oil price cap is easier said than done

The officials, who include U.S. Treasury Secretary Janet Yellen, say the measure will limit the price that Russia receives for energy while allowing Western consumers to continue getting supply. read more

Below are some of the most commonly asked questions about the price cap and challenges it could face.

HAS IT BEEN DONE BEFORE?

A somewhat similar mechanism was established as part of the oil-for-food programme by the United Nations in 1995 to allow Iraq to sell oil in exchange for food and medicine.

Oil buyers paid money into an escrow account run by BNP Paribas bank. The money was used to pay for war reparations to Kuwait, U.N. operations in Iraq and Iraq was allowed to purchase regulated items with any remaining funds.

The programme suffered from widespread corruption and abuse.

While the United Nations was united in opposing Saddam Hussein’s government, the body is divided over Russia’s invasion of Ukraine, which Russia calls a “special military operation”.

China, India and Pakistan are among 35 countries that have refused to condemn Russia. China and India have become the biggest buyers of heavily-discounted Russian oil as Europe cut imports.

WHAT’S THE GOAL OF A BUYERS’ CARTEL?

Western officials say they want to encourage sales of Russian oil at levels slightly above production costs to ensure Russia’s earnings are reduced while it maintains production.

Today, Russia receives more revenue than before the invasion began on Feb. 24 as global price rises have offset the impact of sanctions. read more

Tamas Varga from oil broker PVM said the price cap idea amounted to evidence that outright bans on Russian oil have been counterproductive as Russian revenues have increased.

But creating a buyers’ cartel to starve Russia of petrodollars while alleviating inflationary pressure from oil prices is challenging.

If Russian President Vladimir Putin decides to reduce oil or gas exports the plan will backfire and lead to a rise in prices: “It is a nightmare scenario – both for Europe and Russia.”

WHAT LEVEL FOR THE CAP?

With benchmark Brent prices at $110-$120 per barrel, Russian oil sells at heavy discounts of $30-$40 per barrel and Chinese and Indian buyers are snapping it up.

“G7 countries want to reduce Russian oil revenues and this implies a price cap well below what buyers are currently paying. Some campaigners advocate for a very aggressive reduction, pointing to Russia’s low production costs and arguing it would continue to sell oil at any price above this level,” said Richard Mallinson from Energy Aspects.

Russian production costs are $3-$4 per barrel and Russian firms could probably profit even if oil prices were $25-$30 per barrel.

CAN THE CAP WORK VIA SHIPPING INSURANCE?

Imposing a price cap on Russian oil sales could be done via shipping insurance, Louise Dickson from Rystad and Mallinson said.

The International Group of Protection & Indemnity Clubs in London covers around 95% of the global oil shipping fleet.

Russian oil buyers could be offered a waiver from the ban on European shipping insurance, which takes effect in early December, if they are paying at or below the price cap.

However, there are many obstacles.

“The most obvious is that Russia might not agree to sell at those prices, particularly if the cap is very low and close to production cost,” said Dickson.

“In fact, Putin has already shown his willingness to withhold supplies of natural gas to EU countries that refused to meet payment demands”.

The next obstacle would be China, which could accept Russian insurance, said Dickson.

WILL CHINA AND INDIA COOPERATE?

“Russia and some buyers are already finding alternatives to European insurance markets, using a combination of local insurers and sovereign guarantees. So this mechanism would not force full participation in a price cap,” said Mallinson.

In addition, European insurers might not want to be responsible for monitoring the price cap and could decide to avoid covering such deals even if waivers are available, he said.

The EU would also need to amend the sanctions it passed at the end of May, which would require unanimous support.

“Given the difficult negotiations in May, some countries are worried about reopening this issue and giving Hungary and others another opportunity to push for concessions,” Mallinson said.