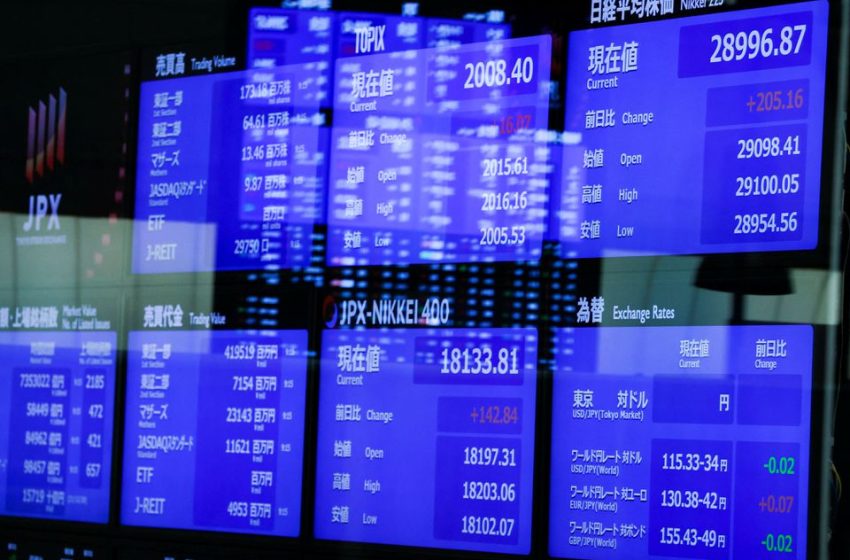 FILE PHOTO - Monitors displaying the stock index prices and Japanese yen exchange rate against the U.S. dollar are seen after the New Year ceremony marking the opening of trading in 2022 at the Tokyo Stock Exchange (TSE), amid the coronavirus disease (COVID-19) pandemic, in Tokyo, Japan January 4, 2022. REUTERS/Issei Kato

LONDON, March 18 (Reuters) – Global stocks clung to their gains for the week on Friday but a heady cocktail of rising interest rates, high oil prices and no end to war in Ukraine kept a lid on the rebound as yields sent a warning signal for the economy.

“Sentiment is still pretty cautious, it’s looking for some reason to rally but it’s struggling to find something which it has strong conviction in,” said Seema Shah, chief strategist at Principal Global Investors.

In Europe, the STOXX (.STOXX) index of 600 leading companies was little changed at 450 points, 9% below its lifetime high from early January.

There is some relief that the U.S. Federal Reserve on Wednesday finally embarked on its series of interest rate hikes, and from here on it was a question of watching how the economy evolves and how high inflation goes before peaking, Shah said.

Oil prices remained above $100 a barrel after slim progress in peace talks between Russia and Ukraine raised the spectre of tighter sanctions and a prolonged disruption to crude supply. read more

“The conflict I suspect is going to keep simmering in the background and as a result you will probably see oil prices remaining elevated,” Shah said.

Adding to the mix, U.S. President Joe Biden is expected to deliver a warning that Beijing will pay a price if it supports Russia’s war effort when he speaks to China’s President Xi Jinping in a call scheduled for 1300 GMT. read more

A first Russian external bond default since the Bolshevik Revolution however appears to have been have averted for now. Sources say some creditors have received payment, in dollars, of Russian bond coupons which fell due this week. read more

The impact on inflation of ports and supply chains disruptions in China due to a spike in COVID infections, risks being massively overlooked by markets, said Michael Hewson, chief markets analyst at CMC Markets. read more

“That is going to be a headwind for valuations and while we are getting a fairly decent rebound at the moment, I really struggle to see us whether or not we can move above the highs we have seen this year,” Hewson said.

S&P 500 futures eased 0.55%, with little in the way of major data ahead of Wall Street’s opening bell.

Problems faced by policymakers whose economies are suffering surging inflation and sagging growth were underscored during a series of central bank meetings this week.

The Fed raised rates for the first time in more than three years on Wednesday, and surprised traders with a more hawkish than expected outlook. The Bank of England also hiked but surprised with a dovish outlook that drove a rally in gilts. read more

The Bank of Japan offered no surprises on Friday, leaving policy ultra easy, which has kept heavy pressure on the yen. read more

Meanwhile the gap between two and 10-year U.S. Treasury yields is near its tightest levels since March 2020, when economies were slammed by the start of COVID lockdowns.

The tighter gap means the yield curve is not far from inverting, long a reliable indicator of a likely recession in the following one or two years.

Oil, which had crumbled some 30% from last week’s peak, has bounced hard as traders fret that hope for peace in Ukraine is misplaced. Brent crude futures were last up 1.3% and at $108, have added more than $10 a barrel in two sessions.

“It’s very difficult to get any confidence that you’re going to be able to reliably source commodities out of Russia or Ukraine,” said Tobin Gorey, a commodities strategist at Commonwealth Bank of Australia in Sydney. “You’re going to be looking elsewhere and that just tends to get priced up.”

Wheat and corn futures, which are sensitive to Black Sea supply disruptions, have bounced sharply.

Japan’s currency hit a six-year low this week and last traded at 118.83 per dollar. “The next multi-session target may well be the 120.00 psychological level,” said Terence Wu, a strategist at OCBC Bank in Singapore.