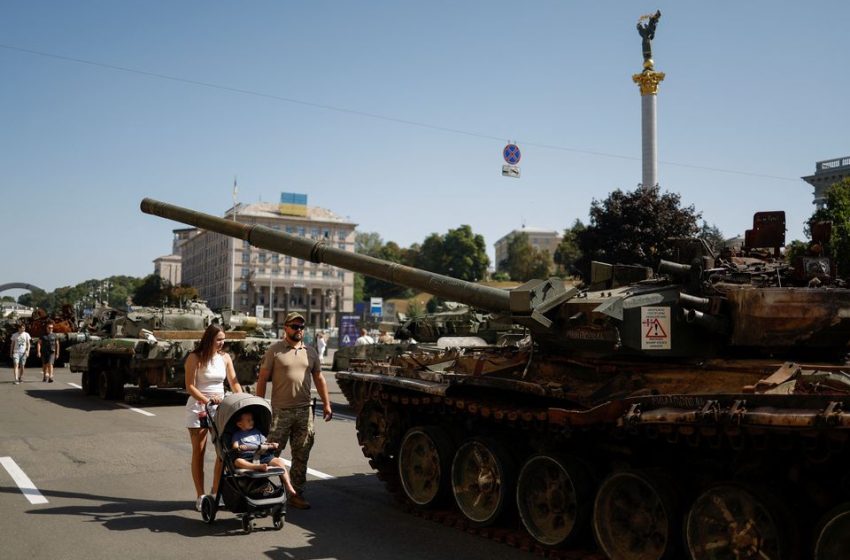 A couple with a child visit an exhibition of destroyed Russian military vehicles and weapons, dedicated to the country's Independence Day, amid Russia's attack on Ukraine, in the centre of Kyiv, Ukraine August 24, 2022. REUTERS / Valentyn Ogirenko

KYIV, Aug 25 (Reuters) – Ukraine’s economy should stabilise over the coming year and expand by as much as 15.5% in 2023, depending on military developments in the war against Russia that began on Feb. 24, the country’s economy minister told Reuters in an interview.

Yulia Svyrydenko, who also serves as first vice prime minister, said government officials were compiling macroeconomic forecasts ahead of the start of negotiations next month with the International Monetary Fund on a fresh lending programme.

Surrounded by sandbags in the basement of the Cabinet of Ministers amid increased warnings of possible attacks on Kyiv, Svyrydenko said current forecasts for gross domestic product in 2023 ranged from a further contraction of 0.4% to an expansion of 15.5%, after a likely contraction of 30-35% this year.

“We understand that we have to keep the economy moving. It’s very hard to make new forecasts because of the uncertainty. It fully depends on the military scenario,” Svyrydenko added.

While Svyrydenko declined to specify how much Ukraine would request from the IMF, she said the new programme should be “relatively large” and needed to be agreed quickly to help free up funds from other creditors and reassure investors.

Oleg Ustenko, a senior economic adviser to President Volodymyr Zelenskiy, said this month an IMF loan of $5 billion over 18 months could serve as an anchor for a larger package of $15 billion-$20 billion from other creditors. read more

That was roughly the amount that Ukraine’s central bank governor, Kyrylo Shevchenko, had identified as a target for IMF funding over two or three years, although experts said such a large amount would put Ukraine well over the fund’s “exceptional access limit” for lending. read more

Ukraine’s previous $5 billion loan programme with the IMF was cancelled in March as the IMF approved $1.4 billion in emergency financing with few conditions in the early weeks of the war, which Russia calls a “special military operation”.

Ukraine, grappling with the internal displacement of some 7 million people and the loss of millions more who have fled to Europe, is preparing for what is very likely to be a brutal winter marked by energy shortages, rising inflation, and a worsening humanitarian crisis.

Ukraine has received $12.7 billion in international budget support from other countries and institutions since Russia’s invasion, and expected another $14 billion in already pledged aid to come in before the end of the year, she said.

“It’s very important for us to keep getting this financial aid – and aid in general – from our partners,” she said.

“We’re fighting for values that are important for Europe and the United States.”