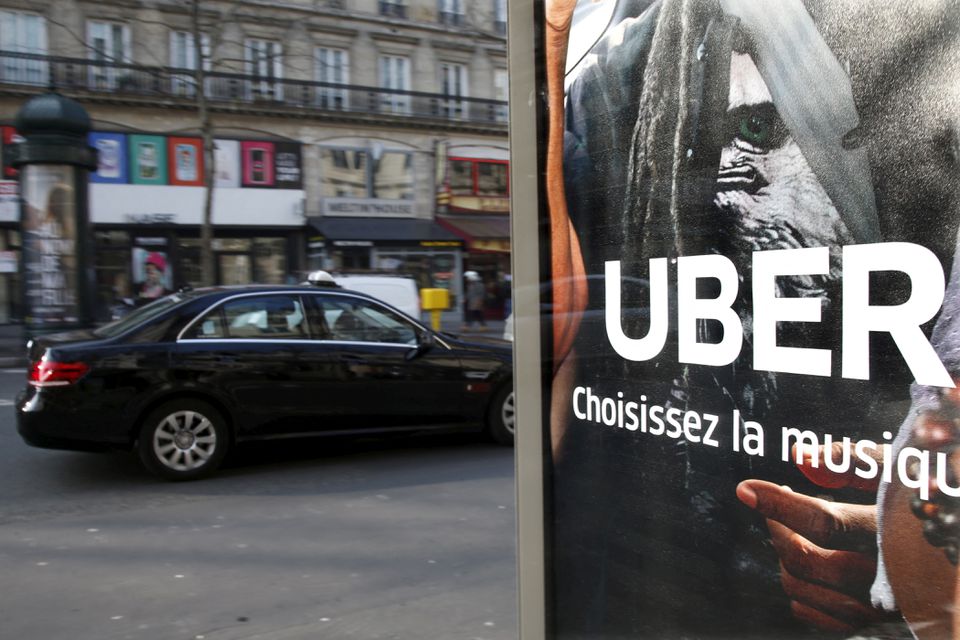 A taxi passes by an advertisement for the Uber car and ride-sharing service displayed on a bus stop in Paris, France, in this March 11, 2016 file photo. REUTERS/Charles Platiau

Dec 14 (Reuters) – Uber Technologies Inc (UBER.N) is looking to sell stakes in non-strategic assets including its holding in Beijing-based Didi Global Inc (DIDI.N), its CEO said on Tuesday, who also described the China market as a tough one with little transparency.

The U.S. firm pulled out of China in 2016 after burning through more than a billion dollars a year due to a price war with Didi. It eventually sold its China operations to Didi in exchange for a stake.

“Our Didi stake we don’t believe is strategic. They’re a competitor, China is a pretty difficult environment with very little transparency,” Uber Chief Executive Dara Khosrowshahi said at a virtual fireside chat with a UBS analyst.

Khosrowshahi said the company was in no rush to sell the shares. “Those kinds of stakes we look to monetize smartly over time.”

He said many of the companies in which Uber has a stake have recently gone public and are still subject to a lockup period – when investors at the time of listing cannot sell stock – adding Uber would continue to hold some stakes for strategic reasons.

Didi did not immediately respond to a request for comment on Wednesday.

Uber shares rose 4.3% to close at $37.26 after Khosrowshahi’s remarks on Tuesday. He also said Uber last week had its best week ever in terms of company-wide gross bookings at its ride-hail and food delivery operations.

But overall, ride-hail trips remained around 10% below pre-pandemic levels, the CEO said.

Uber had roughly $13.1 billion tied up in investments in other companies as of the end of the third quarter, including $4.1 billion in Didi.

Some investors have grown concerned that Uber holding on to these investments sends a signal to the market that stakes in other companies are more attractive than putting freed-up capital into Uber’s own operations.

Uber’s operational business last quarter for the first time achieved profitability on an adjusted earnings basis, but its Didi stake drove a $2.4 billion net loss in the third quarter.

Shares of Didi, which has been rattled by a probe by Chinese regulators into its data practices, are down around 53% from their June 30 initial public offering price.

Under pressure from Chinese regulators, Didi earlier this month said it would withdraw from the U.S. stock exchange and pursue a Hong Kong listing. read more