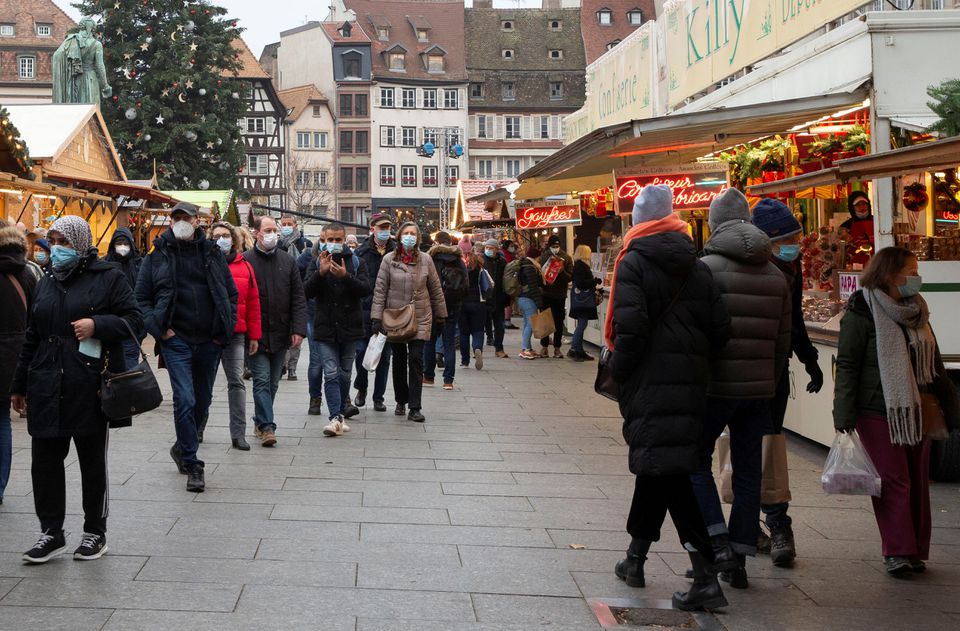 BERLIN/WASHINGTON, Dec 2 (Reuters) – The United States and Germany joined countries around the globe planning stricter COVID-19 restrictions on Thursday as the new Omicron variant rattled markets, fearful it could choke a tentative economic recovery from the pandemic.

Much remains unknown about Omicron, which was first found on Nov. 8 in South Africa and has spread to at least two dozen countries, just as parts of Europe are suffering a surge in infections of the better-known Delta variant as winter sets in.

But South Africa said on Thursday it was seeing an increase in COVID-19 reinfections in patients contracting Omicron in a way that it did not experience with previous variants.

“Previous infection used to protect against Delta but now with Omicron that doesn’t seem to be the case,” said Professor Anne von Gottberg during an online briefing organised by the World Health Organization.

Omicron could become the dominant COVID-19 variant in France by the end of January, the country’s top scientific adviser said on Thursday, after both France and the United States reported their first cases.

In Germany, outgoing Chancellor Angela Merkel and her successor, Olaf Scholz, will discuss with regional leaders restricting the unvaccinated from access to all but the most essential businesses, such as grocery stores and pharmacies. read more

Eager to avoid lockdowns that could derail a fragile recovery of Europe’s biggest economy, they are expected to keep businesses open to the almost 69% of the population that are fully vaccinated as well as those who have recovered from the coronavirus.

In the United States, steps to fight COVID-19 this winter are set to be unveiled later on Thursday, and sources briefed on the matter told Reuters one step would be extending requirements for travellers to wear masks through mid-March.

By early next week the United States will require inbound international travellers to be tested for COVID-19 within a day of departure, regardless of vaccination status.

The first known U.S. case was a fully vaccinated person in California who returned to the United States from South Africa on Nov. 22 and tested positive seven days later. The French case, in the greater Paris region, was a passenger arriving from Nigeria. L8N2SN1JP

“We should see a progressive rise of the Omicron variant, which will take over from Delta,” possibly by the end of January, he said.

BioNTech’s CEO said the vaccine it makes in a partnership with Pfizer (PFE.N) was likely to offer strong protection against severe disease from Omicron.

And GlaxoSmithKline (GSK.L) said that a lab analysis of the antibody-based COVID-19 therapy it is developing with U.S. partner Vir (VIR.O) had shown the drug is effective against the Omicron variant. read more

This contrasts with Regeneron’s (REGN.O) study of its COVID-19 antibody drug, which it said could be less effective against Omicron. Moderna’s (MRNA.O) top boss raised similar concerns about the company’s vaccine. read more

Indications suggesting Omicron may be markedly more contagious than previous variants have rattled financial markets, fearful that new restrictions could choke a tentative recovery from the economic impact of the pandemic.

European shares fell on Thursday, tracking a slide in U.S. equities overnight due to fears around the Omicron coronavirus variant and the possibility of sooner-than-expected interest rate hikes.

The continent-wide STOXX 600 .STOXX was down 0.9% in morning trade, after falling as much as 1.3% in the session. The move marks a sharp reversal of gains on Wednesday. read more

OPEC+ ministers are likely to discuss pausing a planned oil output hike in January during ministerial talks on Thursday, an OPEC+ source said, amid uncertainly about the impact of the pandemic on global crude demand. read more

About 56 countries were reportedly implementing travel measures to guard against Omicron as of Nov. 28, the WHO said.

The United States has barred nearly all foreigners who have been in one of eight southern African countries.

The European Union brought forward the start of its vaccine rollout for 5-to-11-year-olds to Dec. 13, as the president of the European Union’s executive body said there was a “race against time” to stave off the new variant.

The WHO is deploying a surge team to South Africa’s Gauteng province, epicentre of the Omicron outbreak, to help with surveillance and contact tracing, it said on Thursday.

More than 263.1 million people have been reported to be infected by the coronavirus globally since the first cases were identified in China in December 2019 and 5,480,116​ have died, according to a Reuters tally. read more

nEiko users can click https://apac1.apps.cp.thomsonreuters.com/cms/?navid=1063154666 for a case tracker.