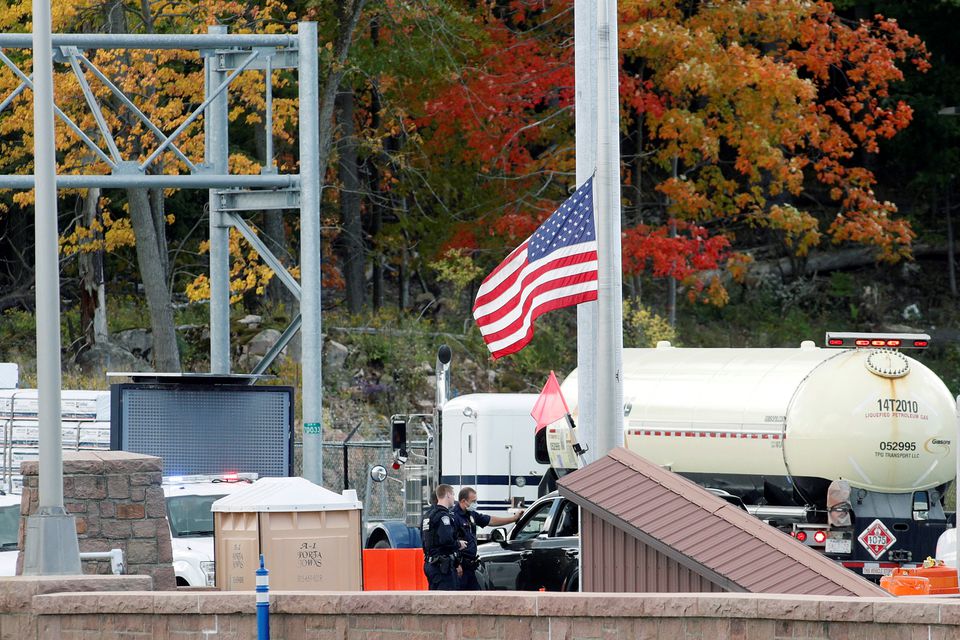 U.S. customs officers speak with a person at the Canada-United States border crossing at the Thousand Islands Bridge, which remains closed to non-essential traffic to combat the spread of the coronavirus disease (COVID-19) in Lansdowne, Ontario, Canada September 28, 2020. REUTERS/Lars Hagberg

The Biden administration is forming expert working groups with Canada, Mexico, the European Union and the United Kingdom to determine how best to safely restart travel after 15 months of pandemic restrictions, a White House official said on Tuesday.

Another U.S. official said the administration will not move quickly to lift orders that bar people from much of the world from entering the United States because of the time it will take for the groups to do their work. The White House informed airlines and others in the travel industry about the groups, the official said.

“While we are not reopening travel today, we hope that these expert working groups will help us use our collective expertise to chart a path forward, with a goal of reopening international travel with our key partners when it is determined that it is safe to do so,” the White House official said, adding “any decisions will be fully guided by the objective analysis and recommendations by public health and medical experts.”

The groups will be led by the White House COVID Response Team and the National Security Council and include the Centers for Disease Control (CDC) and other U.S. agencies.

The CDC said on Tuesday it was easing travel recommendations on 110 countries and territories, including Canada, Mexico, Japan, South Africa and Iran, but has declined to lift any COVID-19 travel restrictions.

CDC Director Rochelle Walensky said the U.S. travel restrictions in place since 2020 are subject to “an interagency conversation, and we are looking at the data in real time as to how we should move forward with that.”

The Biden administration has faced pressure from some lawmakers who said U.S. communities along the Canadian border have faced economic hardship because of land border restrictions.

Airlines and others have pressed the administration to lift the restrictions that prevent most non-U.S. citizens who have been in the United Kingdom, the 26 Schengen nations in Europe without border controls, Ireland, China, India, South Africa, Iran and Brazil from traveling to the United States. The United States also bars most non-essential travel at its land borders with Mexico and Canada.

Airlines for America, a trade group representing American Airlines (AAL.O), Delta Air Lines (DAL.N), Southwest Airlines (LUV.N) and others, praised the working groups but the group believes “these working groups should act quickly to endorse a policy backed by science that will allow travelers who are fully vaccinated to travel to the U.S. Quickly is the key – we believe the science is there.”

United Airlines (UAL.O) said it was encouraged the White House was prioritizing a plan to reopen air travel to international markets and requested urgency, given the typically busy impending summer travel season. “Now is the time to implement a reopening strategy for the benefit of both the economy and the traveling public.”

On Monday, the heads of all passenger airlines flying between Britain and the United States called on both countries to lift limits on trans-Atlantic travel restrictions.

U.S. and UK airline officials said they do not expect Washington to lift restrictions until around July 4 at the earliest as the administration aims to get more Americans vaccinated.