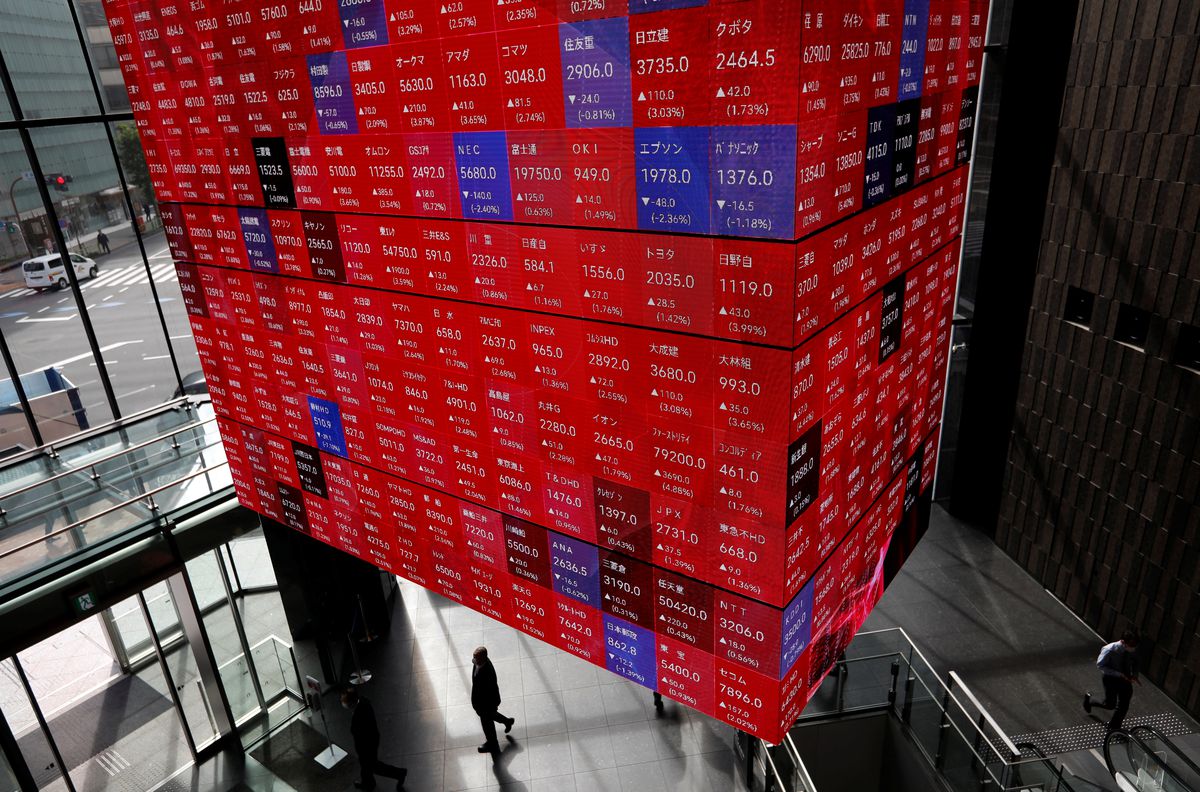 An electronic stock quotation board is displayed inside a conference hall in Tokyo, Japan November 1, 2021. REUTERS/Issei Kato

November’s mixed U.S. jobs report did little to shake market expectations of more aggressive tightening by the Federal Reserve, leaving a week to wait for a consumer price report that could make the case for an early tapering.

Omicron remained a concern as the variant spread to about one-third of U.S. states, though there were reports from South Africa that cases there only had mild symptoms. read more

Early trade was cautious as MSCI’s broadest index of Asia-Pacific shares outside Japan (.MIAPJ0000PUS) inched down 0.5%.

Shares of embattled property developer China Evergrande Group (3333.HK) slid 11% after the company said there was no guarantee it would have enough funds to meet debt repayments. read more

While headline U.S. payrolls had underwhelmed in November, the survey of households was far stronger with a 1.1 million jump in jobs taking unemployment down to 4.2%.

“We think the Fed will view the economy as much closer to full employment than previously thought,” said Barclays economist Michael Gapen.

“Hence, we expect an accelerated taper at the December meeting, followed by the first rate hike in March. We continue to expect three 25 basis point hikes in 2022.”

The futures market is almost fully priced for a hike to 0.25% by May and 0.5% by November.

The hawkish outlook is one reason BofA chief investment strategist Michael Hartnett is bearish on equities for 2022, expecting a “rates shock” and a tightening of financial conditions.

For now, short-term Treasury yields are being pushed higher but the longer-end has rallied as investors wager an earlier start to hikes will mean slower economic growth and inflation over time and a lower peak for the funds rate.

Ten-year U.S. yields dived almost 13 basis points last week and were last at 1.38%, shrinking the spread over two-years to the smallest this year. U/S

The rise in short-term rates has helped underpin the U.S. dollar, particularly against growth-leveraged currencies seen as vulnerable to the spread of the Omicron variant.

The U.S. dollar hit 13-month peaks on the Australian and New Zealand dollars but its index was relatively steady on the majors at 96.214 .

Bitcoin shed a fifth of its value on Saturday as profit-taking and macro-economic concerns triggered nearly $1 billion worth of selling across cryptocurrencies. read more

In commodities, gold found some support from the decline in longer-term bond yields but has been trading sideways for several months in a $1,720/1,870 range. Early Monday, it was steady at $1,784 an ounce .

Oil prices bounced after top exporter Saudi Arabia raised prices for its crude sold to Asia and the United States, and as indirect U.S.-Iran talks on reviving a nuclear deal appeared to hit an impasse.