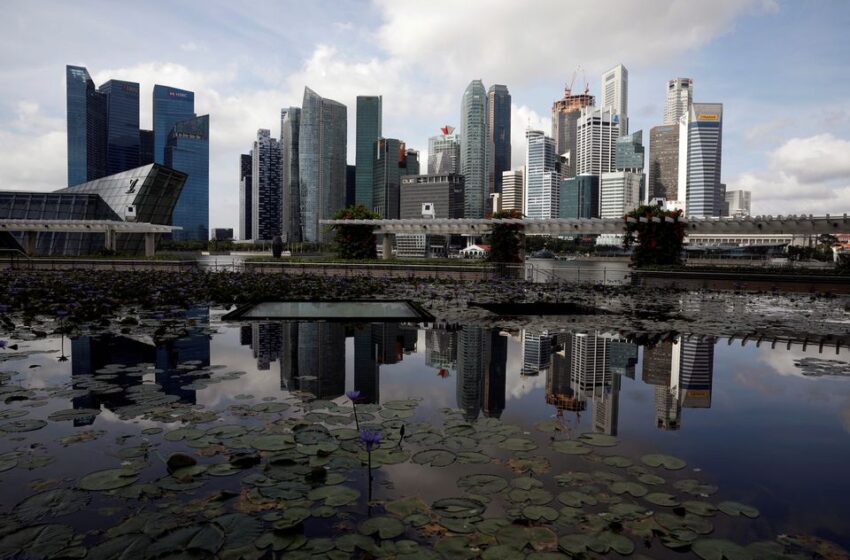 A view of the city skyline in Singapore January 25, 2021. REUTERS/Edgar Su/File Photo

SINGAPORE, Dec 19 (Reuters) – Private equity holdings are being sold at a record clip in an opaque secondary market, investors say, as asset managers cash out to cover losses elsewhere and rebalance portfolios.

The wave of selling is the latest of several signs of stress in private markets and is another signal of investors starting to fall out of love with “alternative assets” that only recently were drawing in cash.

Conceived as an illiquid but lucrative method of accessing unlisted companies, private investments are typically structured into funds run by buyout firms. As they have become popular, they have expanded to encompass property and infrastructure projects.

Yet since such funds are difficult to exit before maturity – usually at least three years – money managers needing to cash out use a secondary market that has lit up in the last few months.

The discounts on offer suggest there is a hurry to get out, and, while total turnover is hard to gauge, because deals are negotiated privately, it is at or near record levels.

Investment firm Hamilton Lane says an unprecedented $224 billion in private equity stakes have been offered in the secondary market this year to mid-November.

Not all have been sold, but analysis firm Preqin estimates the value of secondary transactions up until the third quarter was about $65 billion. This is not far off 2021’s total of just over $70 billion and is far higher than previous years.

Some investors need cash. Market participants pointed to the example of the meltdown in Britain’s debt markets in September, when investors needed to cover losses and turned to their private equity holdings to do it.

Others want to deploy their capital elsewhere – a sign that private equity funds are no longer so highly regarded.

Then there are pension funds that are forced out by the need to comply with their caps on allocations to such investments. They are among the biggest sellers.

“If your allocation target is 5% and suddenly you have the kind of fair market value sitting at 10% … what do you do?” said Alistair Watson, head of strategy innovation for private equity at fund manager abrdn.

The need to sell to rebalance can occur when, as this year, private equity funds have outperformed public markets.

“The challenge is that when you’re trying to sell assets relatively quickly to fix target allocation, you’re generally doing that sale in a period of volatility and therefore secondary pricing may not be the best,” said Watson.

“Usually, you would have a portfolio trading close to book value … maybe a 1 to 2% discount. Today we’re seeing these top-quality portfolios trading at double digit discounts,” said Jan Philipp Schmitz, head of Germany and Asia at Ardian, one of the biggest players in the private-equity secondary market.

On paper, plenty of private investments, which are typically valued quarterly, appear to have done very well this year. But there are signs sentiment is turning.

Still, there are plenty who are satisfied holding private investments.

Thailand’s government pension fund, for example, has allowed the proportion of its portfolio invested in private assets to grow from about 5% eight years ago to about 18% to 20%, Man Juttijudata, deputy secretary general of the fund’s investment strategy and external fund management group, told Reuters.

“It gives good returns in the long term, with acceptable risk levels and less volatility than the main assets,” he said.

Yet, analysis from U.S. investment bank Jefferies found that 58% of secondary-market deals by value in the first half of 2022 were sales by other funds acting as investors in private-equity funds. Participants see more selling pressure building.

“There are still many companies that I feel are marked too highly, and I think that will change in the first half of 2023,” said Vikas Pershad, portfolio manager for Asian equities at British fund manager M&G Investments in Singapore.

“I think people just have to get more realistic.”