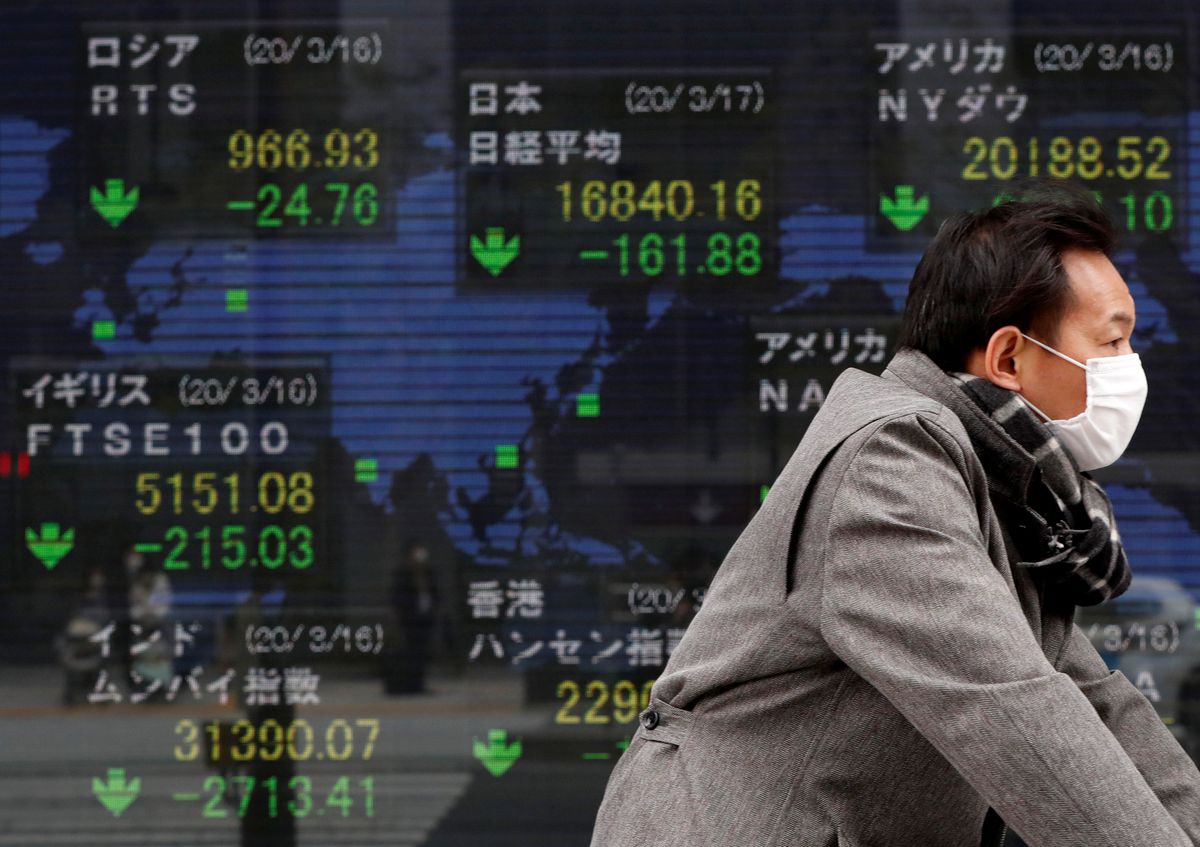 A man wearing a protective face mask following an outbreak of the coronavirus disease (COVID-19) walks past a screen displaying the world's markets indices outside a brokerage in Tokyo, Japan, March 17, 2020. REUTERS/Issei Kato

MSCI’s broadest index of Asia-Pacific shares outside Japan (.MIAPJ0000PUS) fell 0.5% – although it remains on course for its best month of the year – led by tech shares falling in Hong Kong. Japan’s Nikkei (.N225) fell 0.6%.

“There are a couple of things that are of concern to investors, and inflation news is everywhere,” said Khoon Goh, head of Asia research at ANZ Bank in Singapore.

“This is where expectations of when the Fed might start to lift interest rates is starting to come in to focus. The announcement of tapering next week is pretty much a done deal – markets have moved past tapering and are focused on tightening.”

The Fed has all but confirmed it will soon start to whittle back its asset purchases, though has said that shouldn’t signal rate hikes are imminent. Nevertheless, Fed funds futures are priced for a liftoff in the second half of next year.

“The inflation overshoot has been persistent,” they said. “There is (only) so much the Fed can tolerate before reacting … it feels inevitable that that conversation will be brought up more and more as we go into next year.”

Before the Fed meeting the European Central Bank, Bank of Japan and Bank of Canada set policy this week. No changes are expected from Tokyo, but traders are expecting the ECB to push back on market inflation forecasts and are looking for hawkish clues from the Bank of Canada as prices put pressure on rates.

PRICES UP DOWN UNDER

Australia’s unexpected surge in consumer prices, which showed broad gains from rents to petrol prices, has further emboldened bond traders aggressively betting that the Reserve Bank of Australia will back away from its dovish guidance.

The yield on Australia’s April 2023 government bond , which the RBA has targeted at 0.1% as a signal that the cash rate will be at record lows for years, rose as far as 0.237% in a direct challenge to the bank’s intentions.

Three year Australian government bond futures , which are traded more heavily than cash bonds, plunged about 19 basis points to their lowest since mid-2019.

The Australian dollar rose to $0.7536, though broader currency markets were quiet as traders look to central bank meetings over the next week or so for guidance. The Canadian dollar hovered just below last week’s four month high.