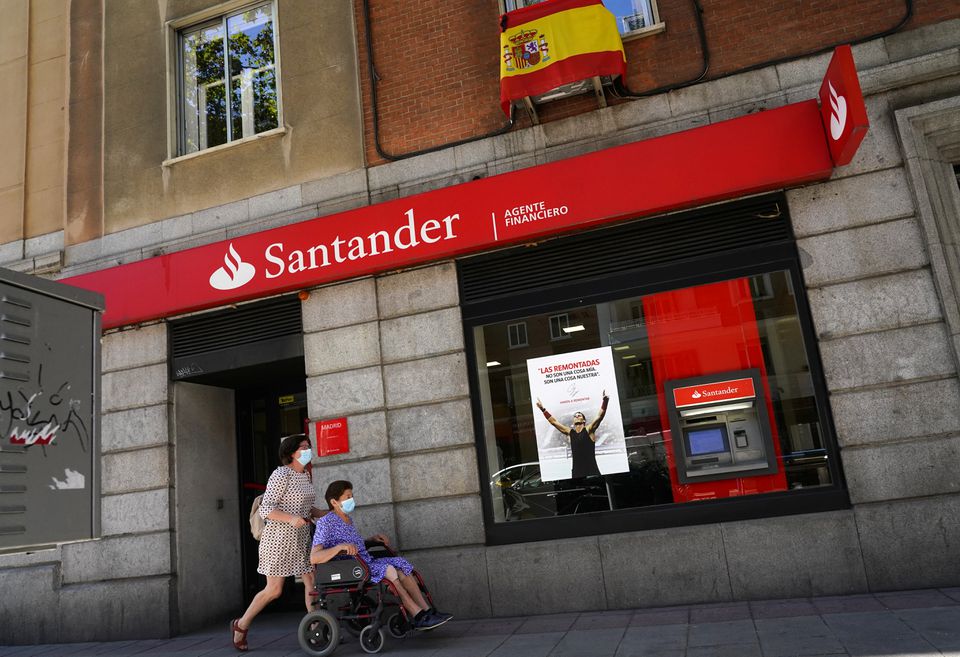 A woman wearing a protective mask is pushed in a wheelchair next to a Santander financial agency branch in Madrid, Spain July 2, 2020. REUTERS/Juan Medina/File photo

MADRID, July 28 (Reuters) – Spain’s Santander (SAN.MC) beat forecasts with a 35% jump in second-quarter underlying profit on the back of lower loan loss provisions, strong U.S. consumer business and a rise in mortgage lending in the UK market.

The result topped the 1.76 billion euros forecast by analysts polled by Reuters and almost matched the 2.1 billion euros underlying profit recorded in the second quarter in 2019, before the outbreak of the coronavirus pandemic.

Second quarter’s net and underlying profit remained the same as the bank did not book any one-off gains or charges. A year ago, pandemic-related writedowns led to a record net loss of 11.1 billion euros.

“We are on track to outperform our profitability target for the year,” Santander boss Ana Botin said in a statement.

Its profitability gauge – return on tangible equity ratio (ROTE) – rose to 12.29% at the end of June from 12.16% in March, ahead of Santander’s original year-end target of around 10%.

The bank also said it planned to return to its dividend payout ratio of 40% to 50% of ordinary earnings, following the lifting the cap on dividend payments by the ECB last week.

Even though Santander did not set aside specific COVID-19 provisions in the quarter, its solvency ratio dipped because of shareholder remuneration.

Analysts from Keefe, Bruyette & Woods welcomed a solid set of results in Britain, the United States and Brazil despite weaker capital, though highlighted that Spain and the rest of Europe came in weaker than expected.

At the end of June, the bank’s cost of risk, which acts as an indicator for potential losses in the future, fell to 94 basis points from 108 points in the previous quarter.

Overall, second-quarter net interest income, a measure of earnings on loans minus deposit costs, rose 6.8% to 8.24 billion euros against the same period last year, with lending growth in the UK and Brazil offsetting pressure from low interest rates.

In Brazil, also responsible for a third of the bank’s underlying results, operating profit rose 29.5% and fell 8.7% in Santander’s home market Spain, where the bank now generates 7% of its business.