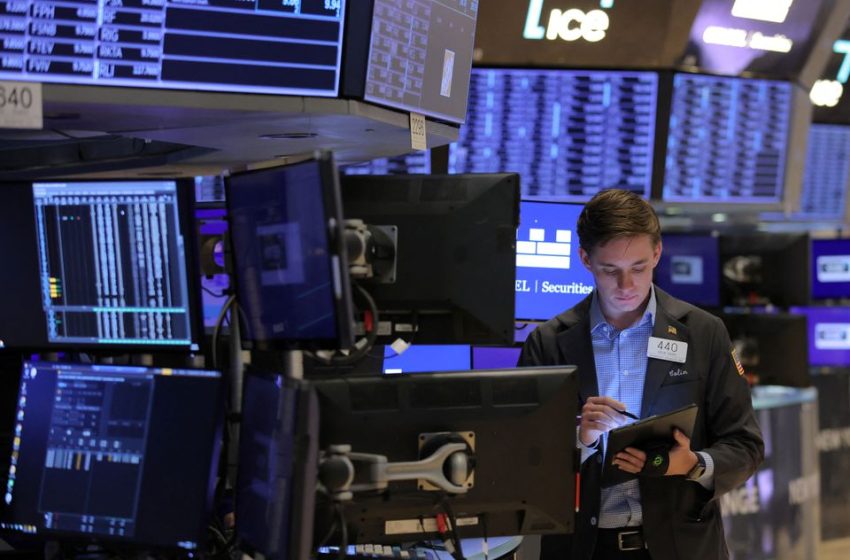 A trader works on the trading floor at the New York Stock Exchange (NYSE) in Manhattan, New York City, U.S., May 20, 2022. REUTERS/Andrew Kelly

May 26 (Reuters) – Futures tracking the Dow and S&P 500 rose on Thursday, ahead of data that will likely offer clues on how the U.S. economy fared amid persistently high inflation, while shares of Nvidia fell after the chipmaker’s dismal outlook.

The Commerce Department will release its second take on first-quarter GDP at 08:30 a.m. ET. The numbers are expected to show a slightly shallower 1.3% contraction than the 1.4% quarterly annualized drop originally reported in April. read more

The report will come a day after the minutes of the Federal Reserve’s May meeting showed policymakers noted the U.S. economy remained strong, with households in such good shape that it might be harder to get them to stop spending and take the pressure off of prices. read more

Most Fed policymakers judged that further hikes of 50 basis points would “likely be appropriate” at the U.S. central bank’s policy meetings in June and July, largely in-line with investors’ expectations. That boosted U.S. stocks to close higher on Wednesday.

Markets have sold off sharply this year on increasing jitters about an economic slowdown due to aggressive Fed policy moves to rein in surging prices. The war in Ukraine, pandemic-related lockdowns in China and recent dismal corporate forecasts have also weighed.

Nvidia Corp (NVDA.O) fell 5.5% in premarket trading after the chip designer forecast a decline in sales of video game chips in the current quarter, and laid out new supply-chain snags from China’s COVID-19 lockdowns. read more

Apple Inc (AAPL.O) slipped 1.5% after a media report that the company plans to keep iPhone production for 2022 roughly flat at about 220 million units. read more

Reporting by Devik Jain and Anisha Sircar in Bengaluru; Editing by Saumyadeb Chakrabarty