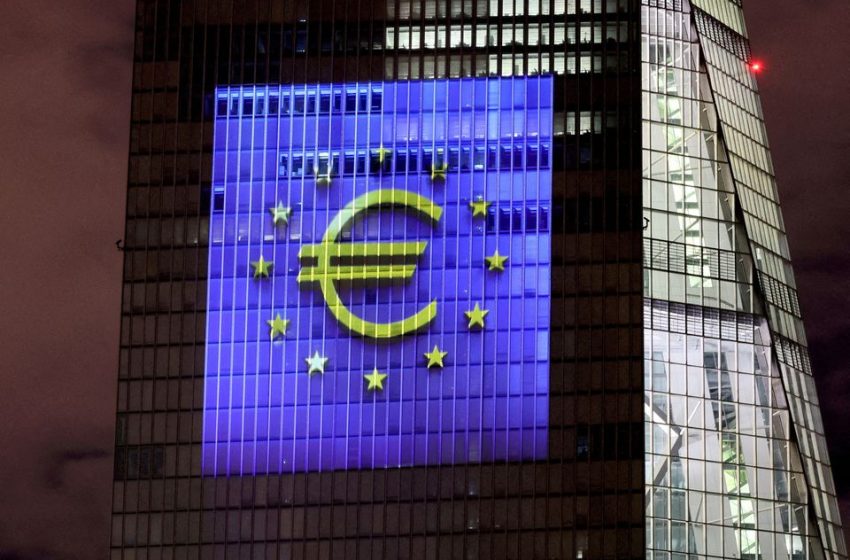 A symphony of light consisting of bars, lines and circles in blue and yellow, the colours of the European Union, illuminates the south facade of the European Central Bank (ECB) headquarters in Frankfurt, Germany, December 30, 2021. REUTERS/Wolfgang Rattay/File Photo

SINTRA, Portugal, June 30 (Reuters) – European Central Bank policymakers put on a brave face at their annual gathering in the hills above the Portuguese capital and forecast further economic expansion despite looming gas shortages, but in private conversations recession fears were increasingly dominant.

Growth has slowed sharply this year amid the fallout from Russia’s war in Ukraine, negating the economic rebound from pandemic lockdowns and raising the risk that any further escalation in the conflict could choke off whatever growth is still left.

That would complicate life for the ECB, which is preparing for its first interest rate hike in over a decade to curb inflation, because policy tightening in a recession risks exacerbating the downturn.

“I don’t expect a recession and in fact, I think there’s a possibility for a positive surprise,” ECB policymaker Bostjan Vasle said at the yearly conference in Sintra. “Services are booming and the labour market is tight.”

The problem is that Europe is stuck with a huge energy dependence, and soaring oil prices are a de facto transfer of wealth worth 2% to 3% of GDP – much of it to Russia.

Hilde C. Bjørnland, a professor of economics at the BI Norwegian Business School, estimates that a 10% increase in oil prices due to geopolitical tensions or supply constraints will reduce GDP in the euro zone by 0.5%.

“The effect will be even larger when oil price volatility is also high, as it is now,” she told ECB policymakers.

Brent crude oil prices are now up around 50% on the year, while gas and power prices have more than doubled in some countries, weighing on household consumption, investment and squeezing corporate margins.

Underlining the gloomy outlook, PMI data and Germany’s Ifo survey both dropped more than expected this month, showing a deterioration in business morale, though neither indicated an outright recession. A key sentiment indicator also dropped, although less than some feared. read more

The economy has some reserves, however, particularly because the pandemic forced households to save up cash, creating a buffer that will now insulate the bloc.

“There are no big imbalances in the economy that should provoke a deep and lasting recession.”

Speaking in private, policymakers were less optimistic however, fearing that energy supply woes will persist all year, sapping household purchasing power and inevitably dragging the bloc into recession.

“I have few doubts we’re going into a recession,” said a third ECB policymaker, who asked not to be named.

U.S. Federal Reserve Chair Jerome Powell, speaking at the ECB’s annual conference, also struck a more sombre tone, warning that the fight against inflation could indeed drag the world’s largest economy into a recession, which would then prove a drag on growth elsewhere, including Europe.

The ECB earlier this month projected solid growth for both this year and next but said a protracted war with more sanctions, gas supply cuts and high commodity prices could shrink the economy by 1.7% next year before a robust rebound in 2024.

“The recession risk is real,” a fourth policymaker said. “The terms of trade shock is huge.”

A recession would come right in the middle of rate hikes aimed at curtailing inflation, which is expected to have hit a record high 8.4% this month.

Still, policymakers speaking both in public and private agreed that in view of the ECB’s mandate of price stability, rate hikes are needed to stop inflation from getting entrenched and there is no going back on plans to raise rates in both July and September before further moves later.