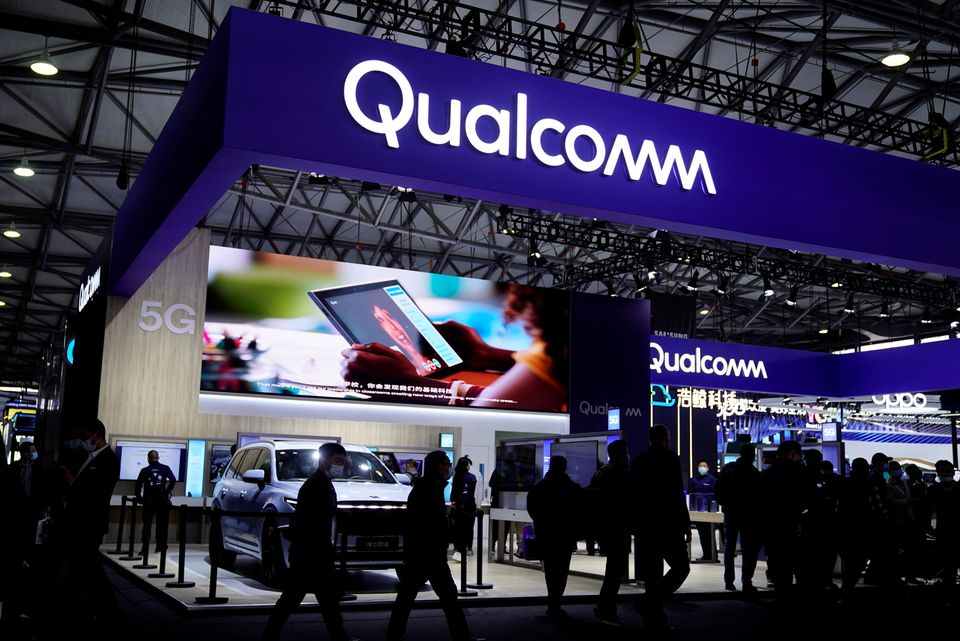 July 28 (Reuters) – Qualcomm Inc (QCOM.O) on Wednesday predicted a rise in sales of chips for 5G phones, including Apple Inc’s (AAPL.O)iPhone, as the company said it had mitigated supply shortfalls that have contributed to a global chip shortage.

The San Diego, California-based company is the biggest supplier of mobile phone chips in the world and the leader in 5G technology, supplying modem chips that help iPhones connect to wireless data networks and the modems and central processors for much of the Android market.

Shares were up 3.1% to $146.86 in after-market trading following the results, which could alleviate some concerns among investors about the impact of the shortage on the smart phone market, including the iPhone.

Qualcomm Chief Executive Officer Cristiano Amon told investors during a conference call that the company’s efforts to secure its chips from multiple manufacturing partners were making progress bolstering supplies, with the first shipments of significant volume in the fiscal third quarter and more to come in the coming months.

“We’re still on track to materially improve supply by the end of the calendar year,” Amon said.

The company is also benefiting from the exit from the global smartphone market of China’s Huawei Technologies Co Ltd (HWT.UL). Huawei’s flagship models did not use Qualcomm chips but its rivals, who are now snapping up market share, mostly do.

Qualcomm has boosted sales of other chips, such as radio-frequency chips that augment its 5G phone chips and whose sales have doubled in the past year. Sales are also growing for a variety of chips for cars and for “internet of things,” or IoT, applications.

Qualcomm said on Wednesday it expects sales of those chips to hit $10 billion this fiscal year, up from $6 billion the previous year. The company also said it expects adjusted profits of $8.24 per share for its fiscal 2021, nearly double the year before.

Qualcomm’s chip revenue forecast for the current fiscal fourth quarter had a midpoint of $7.25 billion, compared with analyst estimates of $6.83 billion, according to Refinitiv data.

Amon said even as its own bottlenecks ease as it brings on more manufacturing partners, some of Qualcomm’s customers cannot find the supporting chips from other vendors that they need to make full devices.

“We continue to see strong demand in every single business outpacing supply,” he said on the call.

Apple on Tuesday predicted the chip shortage would start to hit its iPhone in the fourth quarter.

On Wednesday, Qualcomm said that global sales of 5G handsets for 2021 was likely to come in at the higher end of its forecast of 450 to 550 million handsets. That means that phone makers are likely directing any chips that are in short supply toward production of their more profitable 5G devices. Apple shares rose 0.14% in after-hours trading after Qualcomm’s results.

“While there remain some parts tightness in some periphery chips in the smartphone sector, we don’t think its material enough to cause any meaningful downside, as the industry will prioritize the supply for 5G instead of 4G,” said Kinngai Chan, an analyst at Summit Insights Group.

The company predicted revenue with a midpoint of $1.55 billion from its patent licensing business, compared with analyst expectations of $1.56 billion, according to Refinitiv data.

“Qualcomm has done a phenomenal job in driving the 5G ecosystem. For sure it’s moving a lot faster than 4G,” said Paolo Pescatore, an analyst at PP Foresight.

Sales of other chips have also been expanding, with radio frequency chips and IoT chips reaching sales of $957 million and $1.4 billion, up 114% and 83% from a year earlier, respectively.Reporting by Stephen Nellis Editing by Sonya Hepinstall