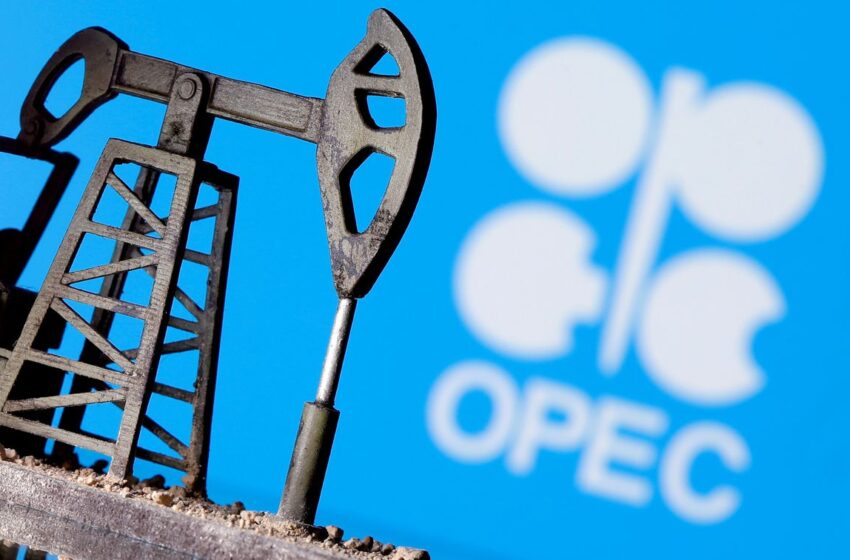 A 3D-printed oil pump jack is seen in front of displayed OPEC logo in this illustration picture, April 14, 2020. REUTERS/Dado Ruvic

LONDON, Jan 6 (Reuters) – The increase in OPEC’s oil output in December has again undershot the rise planned under a deal with allies, a Reuters survey found on Thursday, highlighting capacity constraints that are limiting supply as global demand recovers from the pandemic.

The Organization of the Petroleum Exporting Countries (OPEC) pumped 27.80 million barrels per day (bpd) in December, the survey found, up 70,000 bpd from the previous month but short of the 253,000 bpd increase allowed under the supply deal.

OPEC and its allies, a group known as OPEC+, are gradually relaxing 2020’s output cuts as demand recovers from 2020’s collapse. But many smaller producers can’t raise supply and others have been wary of pumping too much in case of renewed COVID-19 setbacks.

The OPEC+ agreement allowed for a 400,000 bpd production increase in December from all members, of which about 253,000 bpd is shared by the 10 OPEC members participating in the deal, OPEC figures seen by Reuters show.

With output undershooting the planned increase, OPEC’s compliance with its pledged cuts increased to 127% in December, the survey found, from 120% a month earlier.

OPEC+ met on Tuesday and agreed to proceed with another 400,000 bpd output increase in February, suggesting the lag between actual and pledged supply could widen further without larger producers compensating for shortfalls. read more

The biggest rise in December came from OPEC’s top producer, Saudi Arabia, which boosted output largely as promised according to the agreement.

The second-largest came from Angola, which exported five more cargoes in December, according to loading schedules. Output is still in long-term decline and Angolan compliance, at 315%, is among the largest in OPEC, the survey found.

The United Arab Emirates and Algeria also followed through on their higher quotas, and exempt producer Venezuela pumped more as it halts a years-long decline in output.

Production fell or did not increase in Congo, Equatorial Guinea, Nigeria, Libya and Iran, the survey found, in many cases due to a lack of capacity to produce more or unplanned outages.

The biggest decline – 100,000 bpd – was in Libya, another country exempt from OPEC supply curbs, which on Dec. 20 said it had declared force majeure on crude exports from two terminals, Zawia and Mellitah.

Nigeria had the second-largest drop due to a force majeure on exports from the Forcados crude stream.

The Reuters survey aims to track supply to the market and is based on shipping data provided by external sources, Refinitiv Eikon flows data, information from tanker trackers such as Petro-Logistics and Kpler, as well as information provided by sources at oil companies, OPEC and consultants.