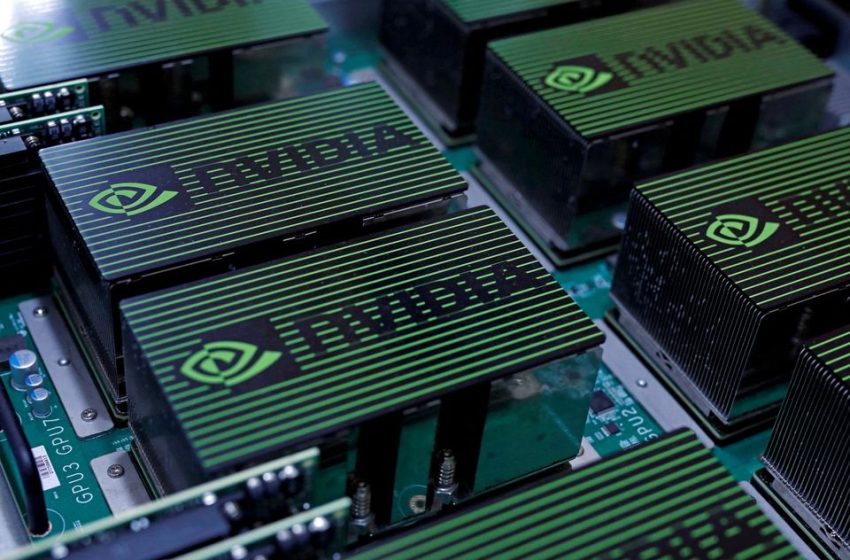 The logo of Nvidia Corporation is seen during the annual Computex computer exhibition in Taipei, Taiwan May 30, 2017. REUTERS/Tyrone Siu

“They’re interested in us using their foundries. We’re very interested in exploring it,” Huang said. But he added that foundry discussions take a long time as it’s about integrating supply chains.

Early last year, Intel, which was making mostly chips it designed, decided to expand its business into making chips that others design as well, called the foundry business, and has announced several multibillion-dollar projects for new manufacturing centers in the United States and Europe. read more

Intel’s shares rose as much as 2.5% following Huang’s comments.

Investors have been watching for public commitments by chip design companies to use Intel’s chip factories. Last year Intel said Qualcomm Inc(QCOM.O)and Amazon.com Inc(AMZN.O) would be customers for its foundry business. read more

Intel CEO Pat Gelsinger told Reuters after a U.S. Senate hearing on Wednesday that his company is “thrilled for their interest in using our foundry capabilities.” He said he had “no particular timeline.” He confirmed that there were ongoing discussions with Nvidia.

“I’m sure he’s interested in having more options … and it doesn’t cost him anything to say that,” said Bernstein analyst Stacy Rasgon about Huang’s comments. “Butit doesn’t tell you anything at all about what it’s actually going to look like when they get there.”

Currently, Taiwan Semiconductor Manufacturing Co. (2330.TW) builds the bulk of Nvidia chips and Huang said “being a foundry at the caliber of a TSMC is not for the faint of heart,” adding that it requires a change in culture to provide not just processes but service.

Asked about whether he would be concerned about working with a competitor like Intel, Huang said trusting and working with industry partners is key and Nvidia has been partnering with many companies including Intel for a long time.

“Intel has known our secrets for years,” he said.