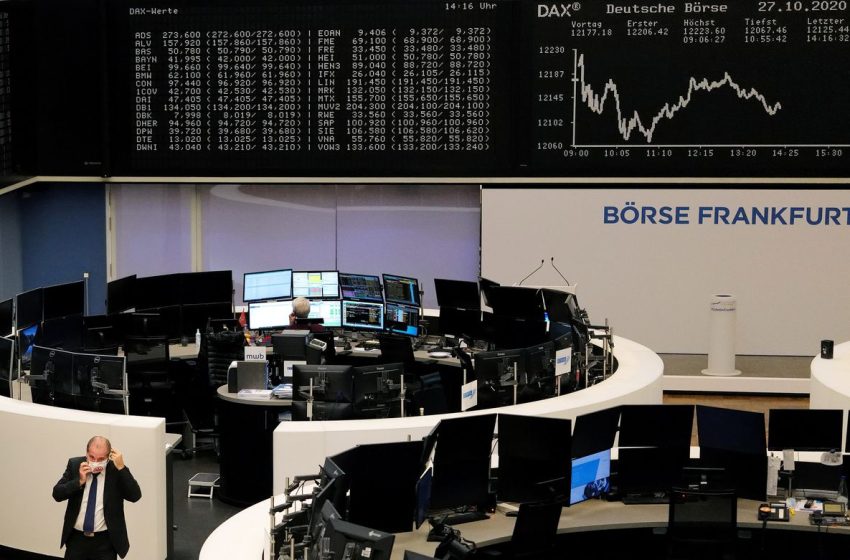 A stock trader adjusts his protective mask as he leaves his trading desk at the stock exchange as the spread of the coronavirus disease (COVID-19) continues in Frankfurt, Germany, October 27, 2020. REUTERS/Kai Pfaffenbach

Morning Bid: Not quite “Together”

A look at the day ahead in markets from Dhara Ranasinghe.

On top of surging inflation, rising interest rates and growing global recession risks, markets in Europe are waking up on Monday to the prospect of heightened uncertainty in France — the euro area’s second biggest economy.

French President Emmanuel Macron is trying to salvage a ruling majority and his economic reform agenda after voters punished his centrist ‘Ensemble’ (Together) alliance in Sunday’s parliamentary election. read more

While Ensemble secured the largest number of lawmakers in the 577-seat National Assembly, it fell short of the threshold required for an absolute majority in a vote that saw a leftwing alliance and the far-right perform strongly.

The euro has softened slightly and the premium investors demand to hold French 10-year government bonds over top-rated Germany widened to 57 basis points from 52 bps on Friday .

France now faces a period of prolonged political instability, while confronting an international crisis in Ukraine and the prospect of slowing growth at home.

Crypto currencies are also in the spotlight, highlighting that turmoil seen across world markets last week isn’t over just yet.

Bitcoin fell below $20,000 over the weekend for the first time since December 2020. That level is of symbolic significance, as it was roughly the peak of the 2017 cycle.

Its hovering around $20,000 as early European trade gets underway but clearly sentiment is fragile. Bitcoin has lost 57% so far this year and 37% this month.

Asian shares meanwhile have been unable to sustain a rare rally as Wall Street futures shed early gains on worries the U.S. Federal Reserve would this week underline its commitment to fighting inflation with further large rate hikes.

European stock futures are flat to a touch higher.

A U.S. holiday means thinned-out trading conditions – a factor that could of course exacerbate volatility.