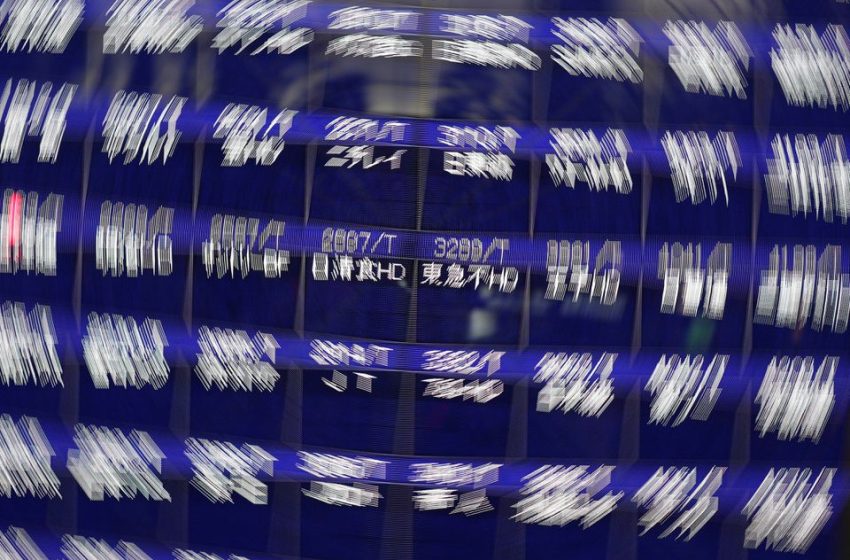 A screen displays blank prices on a stock quotation board after Tokyo Stock Exchange temporarily suspended all trading due to system problems, outside a brokerage, amid the COVID-19 pandemic, in Tokyo, Japan October 1, 2020. Picture taken with a slow shutter speed. REUTERS/Issei Kato/Files

A look at the day ahead in markets from Dhara Ranasinghe.

When the yield on Germany’s benchmark Bund, considered one of thea safest assets in the world, posts its biggest one-day fall since 2011 (as it did on Tuesday), something has changed.

The slide in borrowing costs in Germany, with 10-year yields back in negative territory where they remain this morning, echoes similar moves in other major bond markets and is symptomatic of a big shift in investor thinking.

Russia’s invasion of Ukraine almost a week ago changes the landscape for investors, stick with safety (read sovereign debt, U.S. dollar), stay away from risk assets.

Perhaps more notable is growing doubt over that overriding theme that central banks would step up their exit from post-pandemic stimulus. This is more complicated since inflation is high but the renewed surge in oil prices will likely slow growth and hurt consumption.

So yes, the Bank of Canada will likely hike rates later on Wednesday, with the U.S. Federal Reserve and Bank of England still tipped to follow later in March. But markets increasingly price a more cautious path ahead – especially in the euro area where market pricing took a dramatic turn on Tuesday.

Money markets now price in just 14 basis points worth of ECB rate hikes by year-end, down from 50 bps last month.

Flash euro zone inflation data due out later in the session therefore will unlikely change this view, even if it does show the headline inflation rate rising to new record highs — as analysts forecast. read more

And with Russia bombarding Ukrainian cities and the United States banning Russian flights from its airspace, the mood in world markets remain sombre. read more

Japan’s Nikkei closed almost 1.7% lower, U.S. and European stock futures are in the red, and oil prices have surged to a fresh 7-year higher above $110. A meeting of the Organization of the Petroleum Exporting Countries, Russia and allies, together known as OPEC+, later on could prove interesting. read more

Key developments that should provide more direction to markets on Wednesday: