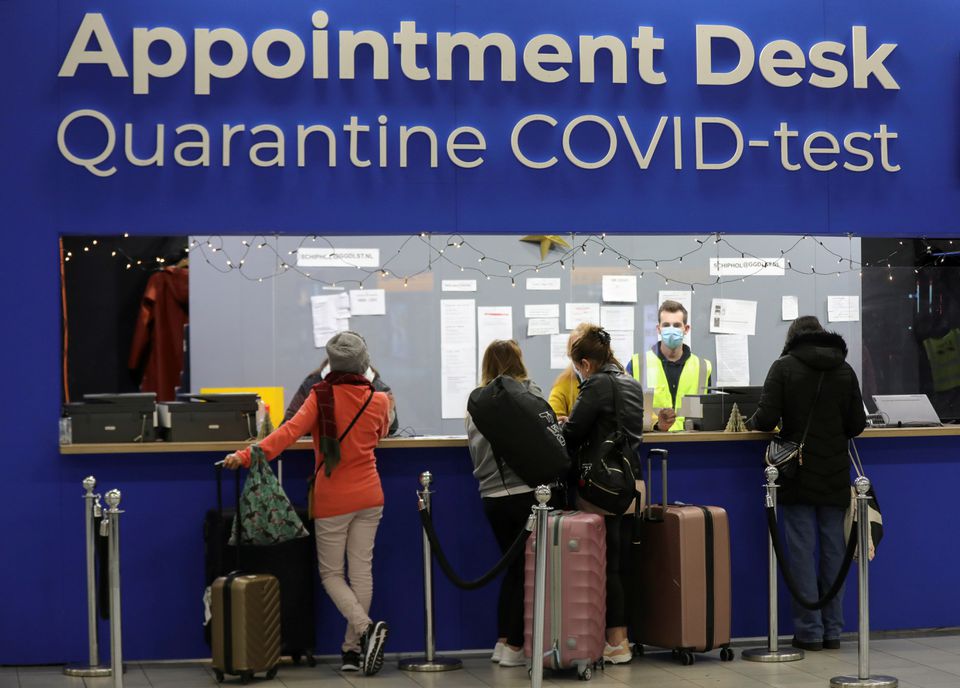 People wait in front of an "Appointment Desk" for quarantine and coronavirus disease (COVID-19) test appointments inside Schiphol Airport, after Dutch health authorities said that 61 people who arrived in Amsterdam on flights from South Africa tested positive for COVID-19, in Amsterdam, Netherlands, November 27, 2021. REUTERS/Eva Plevier

TOKYO/SYDNEY, Nov 29 (Reuters) – Japan said on Monday it would close its borders to foreigners, as the world’s third-largest economy joined Israel in taking the toughest measures against the new coronavirus variant Omicron, which also cast a cloud over Australia’s re-opening plans.

Markets, however, regained some composure as investors await more details of the variant, after sinking last week on fears it could bring fresh curbs, threatening a nascent economic revival from a two-year pandemic.

It could take “days to several weeks” to understand the level of severity of Omicron, says the World Health Organization (WHO), which flagged it as a “variant of concern”.

As a precaution to avert a worst-case scenario, Japan will close its borders to foreigners from Tuesday, Prime Minister Fumio Kishida said, adding that he was ready for criticism that he was being too cautious.

“These are temporary, exceptional measures that we are taking for safety’s sake until there is clearer information about the Omicron variant,” Kishida told reporters.

He did not say how long the restriction would stay. Japanese returning from specified nations would face quarantine in designated facilities, Kishida added. read more

While Japan has not yet found any Omicron infections, Health Minister Shigeyuki Goto said tests were being run to determine if the new variant had infected a traveller from Namibia who tested positive for the virus.

Israel’s ban took effect from midnight on Sunday. It has also vowed to use counter-terrorism phone-tracking technology to combat the new variant. read more

Australia said it would review plans to reopen its borders to skilled migrants and students from Dec. 1, after reporting its first Omicron cases.

A national security panel is to meet later in the day to assess border easing due from Wednesday, Prime Minister Scott Morrison said, but added that it was a “bit too early” to reinstate two-week hotel quarantine for foreign travellers.

“So we just take this one step at a time, get the best information, make calm, sensible decisions,” Morrison told broadcaster Nine News. read more

Symptoms of Omicron are so far mild and could be treated at home, a South African doctor, one of the first to suspect a different variant, has said. read more

Morocco will ban all inbound international passenger flights for two weeks from Nov. 29, the government said on Sunday.

Singapore has deferred the start of vaccinated travel lanes with Middle Eastern countries, such as Qatar, Saudi Arabia and the United Arab Emirates, in view of their role as “transport nodes” for affected countries, its health ministry said.

The wealthy southeast Asian city-state and neighbouring Malaysia re-opened their land border, one of the world’s busiest, allowing vaccinated travellers to cross after a shutdown that lasted nearly two years. read more

Britain said it would call an urgent meeting of G7 health ministers on Monday.

President Joe Biden is to provide fresh details of the variant and the U.S. response on Monday, the White House said in a statement. read more

South Africa has denounced the measures as unfair and potentially harmful to the economy, saying it was being punished for its scientific ability to identify variants early.

“The prohibition of travel is not informed by science, nor will it be effective in preventing the spread of this variant,” President Cyril Ramaphosa said on Sunday.

“The only thing (it) … will do is to further damage the economies of the affected countries.”