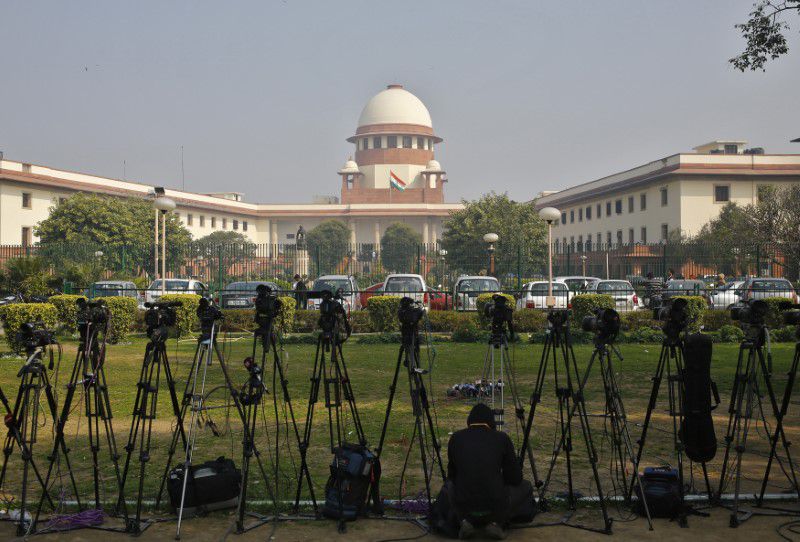 A television journalist sets his camera inside the premises of the Supreme Court in New Delhi February 18, 2014. REUTERS/Anindito Mukherjee

MUMBAI, Aug 8 (Reuters) – Informal talks are taking place to deal with the fall-out from two rulings by India’s Supreme Court that threaten the repayment of loans totalling nearly 500 billion rupees ($6.73 billion) to some of India’s largest banks, bankers close to the matter say.

Any failure to recoup the money adds to stress in the banking sector, which is already dealing with an increased level of bad loans and reduced profits because of the impact of the pandemic.

That ruling was delivered days after the Supreme Court rejected a petition to allow telecom companies to approach the Department of Telecommunications to renegotiate outstanding dues in a long-runinng dispute with Indian telecom players.

That raises concerns, bankers say, over whether Vodafone Idea (VODA.NS) will repay some 300 billion rupees ($4.04 billion) it owes to Indian banks and billions of dollars more in long-term dues to the government. read more

Loans to Future worth nearly 200 billion rupees were restructured earlier this year, giving it more time to come up with repayments due over the next two years, but that was on the premise that Reliance would bail it out, the bankers said.

Future group did not immediately respond to a request for comment.

Should Future be taken to a bankruptcy court, bankers say they are concerned they will have to take haircuts on the loans of more than 75%.

“The immediate apprehension is that the restructuring deal will fall through for banks by December,” said a banker at a public sector bank that has lent money to Future.

Bank of India, the lead bank in consortium lending to Future, did not immediately respond to an emailed request for comment.

“Even though banks have the option of restructuring loans in case the company defaults, it will only make sense if there is clear cash flow visibility, which is not the case right now,” a senior banker at a public sector bank said on condition of anonymity.

Already, at the end of March, Indian banks had total non-performing assets of 8.34 trillion rupees ($112.48 billion), the government has said. It has yet to provide more updated figures.