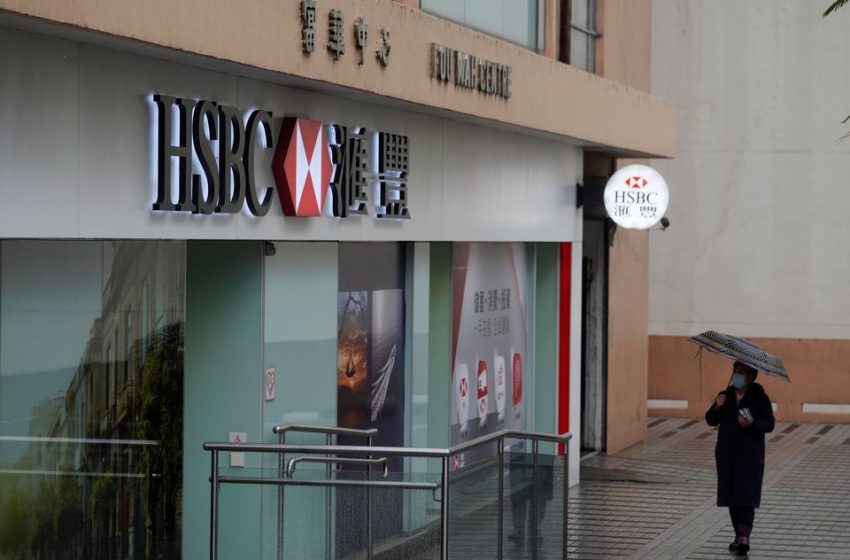 SINGAPORE/LONDON, April 26 (Reuters) – HSBC (HSBA.L) has shelved plans for fresh stock buybacks this year after reporting an unexpected hit to its capital on Tuesday, as a cocktail of rising inflation, geopolitical drama and economic weakness dented its prospects.

Shares in Europe’s biggest bank were trading 2.2% lower by 0825 GMT against a 0.6% gain in the benchmark FTSE 100 index (.FTSE) and a more buoyant banking index, as investors reacted to revised payout plans, which compounded disappointing news on the bank’s balance sheet.

HSBC’s core capital ratio, a key measure of a bank’s financial strength, fell 1.7 percentage points from the end of 2021 to 14.1% as new regulations and steepening yield curves led to losses on a hedging strategy the bank forged before a slew of central bank rate hikes.

Soaring energy prices and supply chain outages, partly due to the war in Ukraine, are hurting bank outlooks at a time when surging inflation and potentially rapid rate rises threaten to scupper a nascent global economic recovery from the pandemic.

HSBC Chief Executive Noel Quinn, who has run the London-headquartered bank for the last two years, is ploughing billions into Asia to drive growth, with a focus on the wealth management business. He has also moved global executives there.

“Although the economic outlook remains uncertain, the continued upward path of interest rates since our full-year results has further strengthened our confidence in delivering a double-digit return on average tangible equity in 2023,” Quinn said in the results statement on Tuesday.

HSBC posted a pretax profit of $4.17 billion for the first quarter ending on March 31, down from $5.78 billion a year earlier.

The results, however, beat the $3.72 billion average estimate of 16 analysts compiled by HSBC, which earns about two-thirds of its reported pretax profit from Asia.

In February, HSBC brought forward its key profitability target by a year and more than doubled its annual profit as expected bad loans from the pandemic failed to materialise.

The lender dealt a blow to shareholders by saying further share buybacks, which it has used in recent years to return excess capital to investors, would be unlikely this year. It blamed volatility in the value of some government and corporate bonds it holds as hedges against dips in interest income.

But the bank will proceed with a $1 billion buyback this year which it previously announced.

HSBC’s Hong Kong-listed shares fell after the results statement and were down 3.6% at 0620 GMT, their lowest since March 16.

The bank said expected credit losses (ECL) came in at $600 million in the first quarter. In the same period last year it unlocked $400 million of reserves as the outlook improved.

The increased ECL primarily reflects the direct and broader economic impacts of the Russia-Ukraine conflict and inflationary pressures on the forward economic outlook, the bank said.

Profits were down on last year’s first quarter due to market impacts on wealth revenue and a more normalised level of ECL, Quinn said.

HSBC ranks as one of Europe’s largest banks, along with BNP Paribas (BNPP.PA), with total assets of $2.9 trillion as of last year.

On Tuesday, Swiss wealth titan UBS (UBSG.S) reported a 17% rise in quarterly net profit to its best since 2007 on the back of strong trading. read more

HSBC’s revenues fell 3%, in part due to COVID-19 restrictions in the bank’s biggest market of Hong Kong as its branches were closed, hitting its sales of investment products.