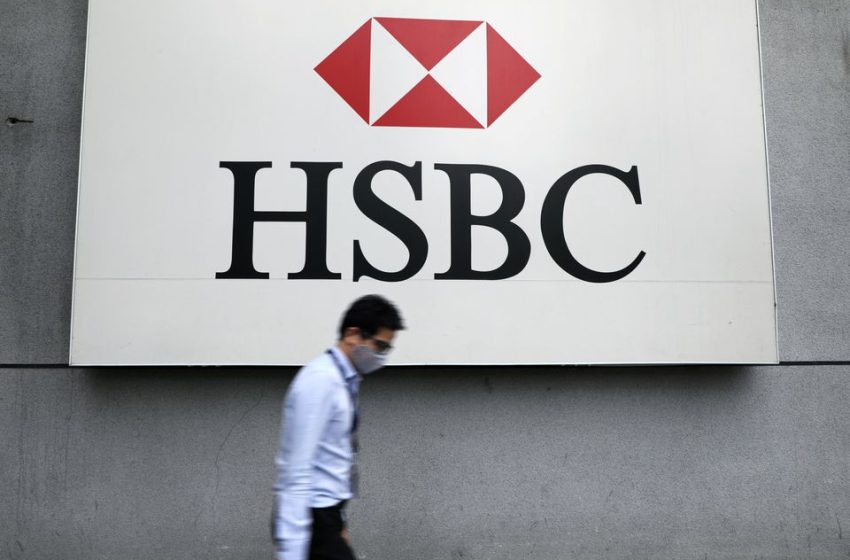 A man wearing a protective mask walks past a logo of HSBC at its headquarters, amid the coronavirus disease (COVID-19) outbreak in Kuala Lumpur, Malaysia September 9, 2020. REUTERS/Lim Huey Teng

SINGAPORE/LONDON, Feb 22 (Reuters) – HSBC (HSBA.L) brought forward its key profitability target by a year and more than doubled its annual profit as expected bad loans from the COVID-19 pandemic failed to materialise, and it pointed to rising interest rates lifting its income.

Like global peers, HSBC, one of Europe’s largest banks, is taking advantage of lower-than-expected impairment charges as its borrowers reap the benefit of government support in markets hit by coronavirus, while economic recovery also helps firms.

HSBC’s shares shed 3.4% in afternoon trade on Tuesday, compared to a fall of 1.4% in the benchmark FTSE index (.FTSE) as global stocks stumbled after the Ukraine crisis intensified. read more

“We have good momentum coming into 2022 and are confident that we can continue to execute against our strategy,” Group Chief Executive Noel Quinn said in the results statement.

London-headquartered HSBC said it would buy back up to $1 billion of its own shares after the conclusion of an existing $2 billion buyback programme.

It said that if central bank interest rates rose worldwide as expected, the resulting improvement in lending margins would meet its goal of a double-digit return on equity in 2023, a year sooner than expected.

“Given their large Asia footprint, it will be interesting to see if the zero-COVID policy in the region will adversely impact their performance relative to their other more UK-centric London rivals in 2022,” said Sudeepto Mukherjee, head of financial Services at consultancy Publicis Sapient.

Quinn, who has run the bank on a permanent basis for the past two years, has doubled down on Asia by moving global executives there and is investing billions of dollars in the lucrative wealth management business.

The lender reported pretax profits of $18.9 billion last year, up from the previous year’s $8.8 billion, and just below the $19.1 billion average of 17 analyst estimates compiled by HSBC. Asia contributed 65% of the profit.

Analysts at Citi said HSBC’s guidance for this year was largely in line with consensus, “with some downside risks to provisions and upside risks to capital return”.

A man wearing a protective mask walks past a logo of HSBC at its headquarters, amid the coronavirus disease (COVID-19) outbreak in Kuala Lumpur, Malaysia September 9, 2020. REUTERS/Lim Huey TengRead More

The bank said it took a $500 million charge for expected credit losses in the quarter, mainly due to the downturn in China’s troubled commercial real estate sector.

HSBC expects weaker performance in its wealth management in Asia in the first quarter of 2022.

HSBC CFO Ewen Stevenson told Reuters the wealth management business would be affected by the weakness in global markets and closures of bank branches in Hong Kong, but the bank expected a bounceback later this year.

While Asia and most global economies open up, Hong Kong – HSBC’s biggest market – is tightening pandemic curbs as it battles a growing outbreak of COVID-19, stoking worries about the economic impact. read more

HSBC’s London-listed shares have gained 29% over the past year, versus a rise of 16% in StanChart and a surge of 25% in Barclays (BARC.L).

The bank reported revenue slipped 2% in 2021 on low global interest rates and falling income in its markets business, but said rising rates this year and beyond should help reverse the decline.

“After absorbing the impact of low interest rates for some time, we believe we have turned the corner on revenue,” Quinn said.

HSBC said it released $900 million in cash it had put aside in case pandemic-related bad loans spiked, as opposed to the corresponding time a year earlier, when it took a charge of $8.8 billion against expected losses.

Reporting by Anshuman Daga in Singapore and Lawrence White in London; Editing by Kenneth Maxwell and Clarence Fernandez