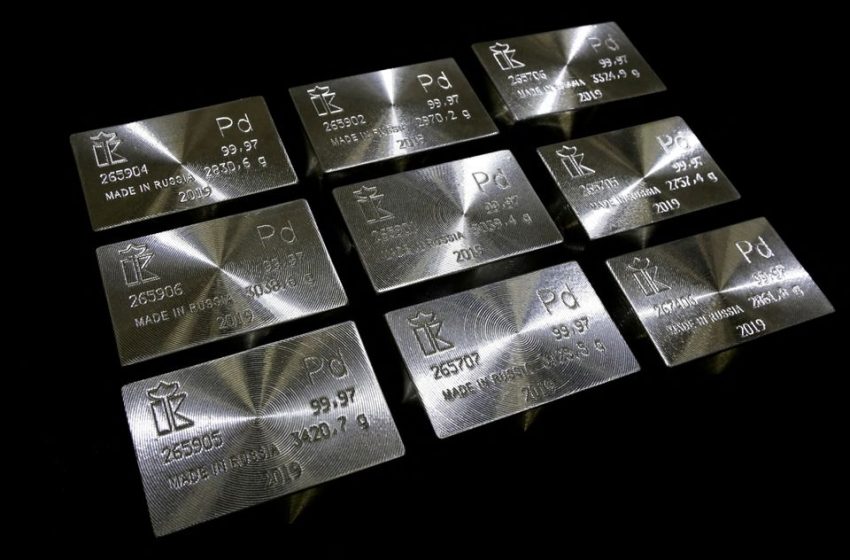 Ingots of 99.97 percent pure palladium are stored at a plant owned by Krastsvetmet, one of the world's biggest manufacturers of non-ferrous metals, in Krasnoyarsk, Russia April 9, 2019. REUTERS/

March 9 (Reuters) – Gold and palladium on Wednesday hit the brakes on a blistering rally as riskier assets attempted a comeback, with analysts predicting another run higher for precious metals in case of a further escalation in the Ukraine crisis.

“What we may be seeing now is just a small correction after such a large move over a prolonged period of time (in gold and palladium),” said Craig Erlam, senior market analyst at OANDA.

Key equity indices rebounded as investors picked up beaten-down stocks following a recent rout sparked by fears about growing Western sanctions on Russia for its invasion of Ukraine.

While gold might be edging away from record highs and stocks firming, “sentiment can turn negative very quickly. Volatile market conditions are not going anywhere until (Russian President Vladimir) Putin ends the invasion of Ukraine,” ThinkMarkets analyst Fawad Razaqzada wrote in a note.

Crude oil prices, strength in which has driven fears of inflation and burnished gold’s appeal as a hedge against rising costs, also retreated.

Gold could face stiff resistance near these high levels and a pullback to near $1,930 is likely, with some consolidation around $1,930-$2,075, said Michael McCarthy, chief strategy officer at Tiger Brokers, Australia.

“But if the current instability in geopolitical terms continues, it’s very likely we will seek fresh all time highs for precious metals,” McCarthy added.

Palladium , used by automakers in catalytic converters to curb emissions, fell 2.2% to $3,109.77 per ounce after hitting a record high of $3,440.76 on Monday, amid fears of disruptions to supply from top producer Russia. read more