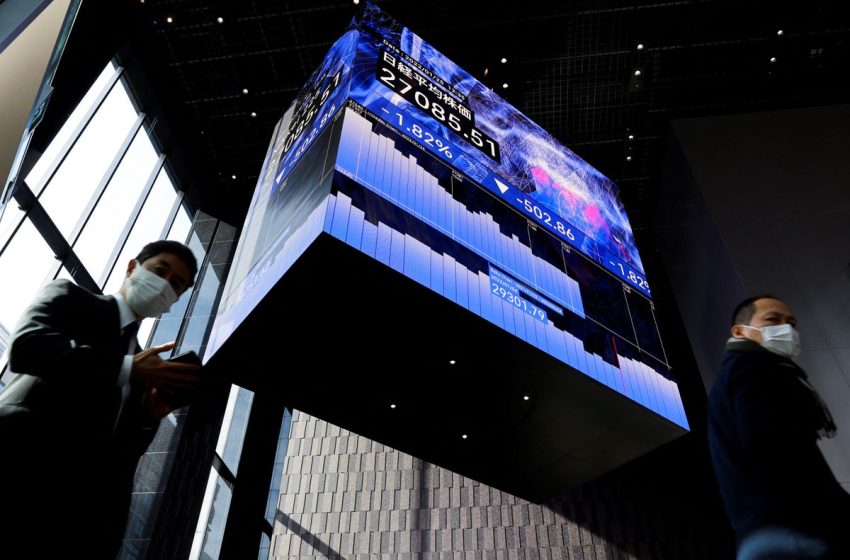 BEIJING, Jan 26 (Reuters) – Asian share markets steadied on Wednesday after three sessions of losses as investors awaited any hints about faster tightening of monetary policy from the U.S. Federal Reserve later in the day.

MSCI’s broadest index of Asia-Pacific shares outside Japan (.MIAPJ0000PUS) slipped 0.1% on Wednesday, after sharp losses earlier in the week which have left the index off 2.8% this year. It is testing mid-December’s one-year low.

The cautious rebound for shares looked set to continue in Europe, with pan-region Euro Stoxx 50 futures 0.5% higher, and FTSE futures were up 0.8%.

Nasdaq futures climbed 0.3% in Asian trading, while the S&P 500 e-minis were flat, after all three main U.S. indices had fallen on Tuesday.

The Fed is due to update its policy plan later on Wednesday (1900 GMT) after a two-day meeting, and markets are priced for its first rate hike in March, with three more quarter-point increases by year-end.

“Asian markets are currently being affected by volatility in global markets, concerns about Fed tightening in the face of higher inflation and uncertainty about events in Russia and Ukraine,” said Mansoor Mohi-uddin, chief economist at Bank of Singapore.

“We expect the Fed meeting, however, will not add to volatility. The central bank is set to only finish its quantitative easing in March and while it will signal interest rates are likely to be raised in March too, the Fed will endorse market expectations for quarterly 25bps hikes for its fed funds rate rather than more aggressive tightening this year,” Mohi-uddin added.

Growing tensions as Russian troops massed on Ukraine’s border have added to a risk-averse environment for investors. read more

Globally, U.S. stocks posted their worst week since 2020 last week, and MSCI’s world index (.MIWD00000PUS) is on course for its biggest monthly drop since the COVID-19 pandemic hit markets in March 2020.

However, analysts thought this was unlikely to derail the Fed’s plans to tighten policy.

“As long as turbulence remains relatively contained to equity markets, the bar for the Fed becoming dovish is high,” said analysts at Nomura in a note.

They said they thought some of the Fed’s policy committee would interpret the latest sell off in equities as potentially taking out some of the “froth” in the market, so it would not change their view, especially amid worries about high inflation.

U.S. Treasuries were steady, with yields on two year notes at 1.0313%, holding onto gains made earlier this month. The yield on benchmark 10-year Treasury notes was 1.7743%, a little below the two-year high of 1.9% hit last week.

The dollar index against a basket of major currencies was mostly unchanged, with the greenback near its month high versus the euro hit the day before. FRX

Gold prices were steady on Wednesday at $1,846 per ounce supported near the previous session’s 10-week high.