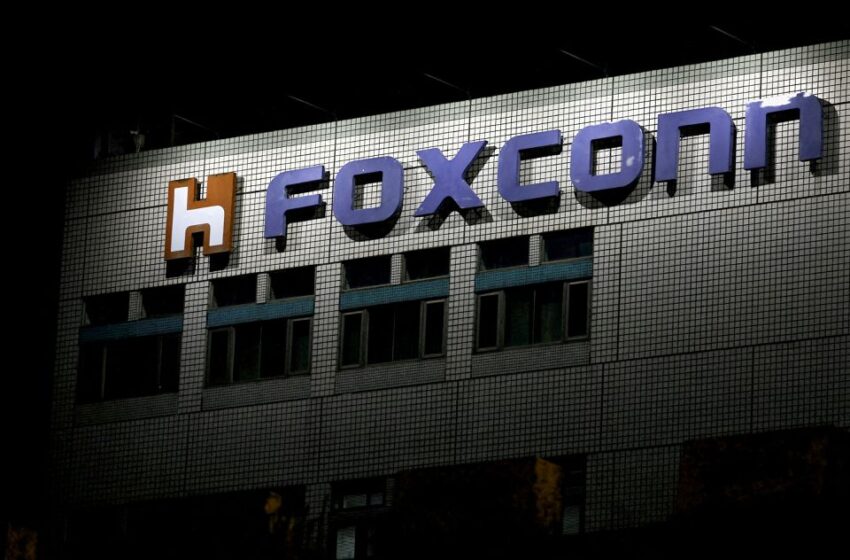 The logo of Foxconn is seen outside a building in Taipei, Taiwan November 10, 2022. REUTERS/Ann Wang

TAIPEI, Dec 19 (Reuters) – Foxconn, the world’s largest contract electronics maker, is likely to be fined soon by Taiwan’s government for an unauthorised investment in a Chinese chip maker, a person with direct knowledge of the situation said on Monday.

Taiwan, which Beijing views as sovereign Chinese territory, has turned a wary eye on China’s ambition to boost its semiconductor industry and is tightening legislation to prevent what it says is China stealing its chip technology.

Foxconn, a major Apple Inc supplier and iPhone maker, disclosed in July it was a shareholder in embattled Chinese chip conglomerate Tsinghua Unigroup, but said late on Friday it would be selling the stake. Taiwan said on Saturday it would fine Foxconn over the investment.

Taiwan’s government, which needs to clear all outbound investments, had not approved the deal. Taipei also prohibits companies from building their most advanced chip foundries in China to ensure they do not site their best technology offshore.

The person familiar with the situation told Reuters that the Economy Ministry would contact Foxconn on Monday to confirm the equity sale.

“Even though the investment was later pulled, the fact has already been established that they invested first, and they will be fined,” said the source, who was not authorised to speak to the media.

“It should not take too long for Hon Hai to be punished,” the source added, referring to Foxconn’s formal name, Hon Hai Precision Industry Co Ltd.

Reuters has previously reported that the company could be fined up to T$25 million ($813,749).

Foxconn declined to comment. Its shares closed up 1% on Monday, outperforming the broader market, which ended 0.7% lower.

Tsinghua Unigroup has not responded to a request for comment on the investment being pulled.

Taiwanese law states the government can prohibit investment in China “based on the consideration of national security and industry development”. Violators of the law can be fined repeatedly until corrections are made.

Foxconn has been seeking to acquire chip plants globally as a worldwide chip shortage rattles producers of goods from cars to electronics. It is keen to make auto chips in particular as it expands into the electric vehicle market.