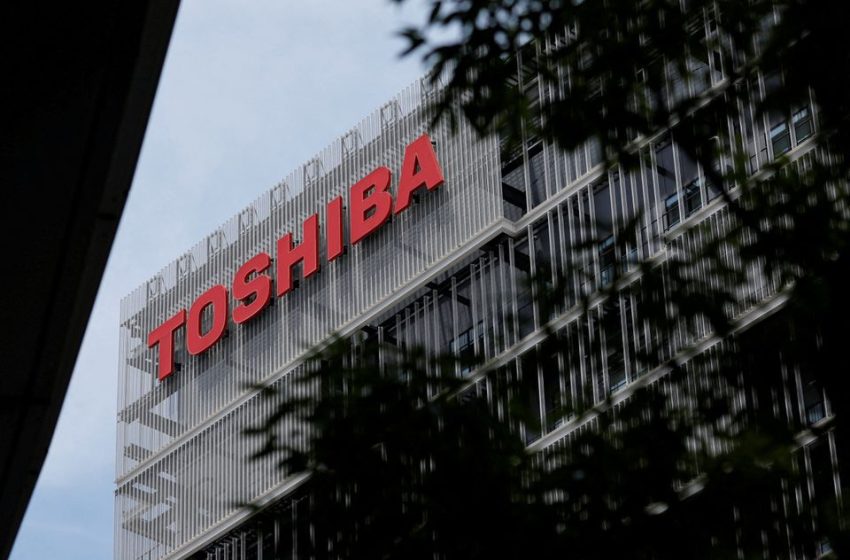 The logo of Toshiba Corp is displayed atop of the company's facility building in Kawasaki, Japan, June 24, 2022. REUTERS/Issei Kato/File Photo

TOKYO, Oct 18 (Reuters) – The preferred bidder to buy out Toshiba Corp has offered to pay less than the widely regarded threshold of 6,000 yen a share, two sources said, indicating the premium for the Japanese conglomerate may not be as rich as investors had hoped.

A consortium led by private equity firm Japan Industrial Partners (JIP) was granted preferred bidder status by Toshiba in a second round of bidding on Oct. 7, though the conglomerate is still open to proposals from others, people familiar with the matter have said. read more

JIP, which has been inviting Japanese firms including Orix Corp and Chubu Electric Power Co Inc to join the consortium, has been given a month to come up with a detailed proposal including financing, one of the sources said.

JIP’s initial offer was below 6,000 yen per share, the two sources told Reuters, putting the value of a potential tender offer at less than 2.6 trillion yen ($17.5 billion).

Toshiba shares closed 5,435 yen on Monday. They have risen about 15% this year on expectations for a buyout.

The offer price may change as a consortium led by state-backed Japan Investment Corp (JIC) is preparing a competing bid, said the sources, who declined to be identified because the matter is private.

JIP teamed up with JIC to bid for Toshiba in the first bidding round but later split due to disagreement about post-buyout strategies, people familiar with the matter have said.

JIC has been in talks with Bain Capital, one of several overseas funds that passed the first round of bidding, as well as with MBK Partners, the sources said.

Investors have considered 6,000 yen to be a key threshold.

During a strategic review last year, at least one global private equity firm told Toshiba’s review committee that a deal to take the conglomerate private could be done at 6,000 yen a share or more.

But the environment for leveraged buyouts has since changed with global monetary tightening. Chip industry share prices have plummeted worldwide due to fear of slumping semiconductor demand, potentially affecting the value of Toshiba’s 40.6% stake in flash memory chip maker Kioxia Holdings Corp.

Still, with its ultra-easy policy, Japan has a relatively stable investment environment compared with the United States, they said. Japan has seen some large buyouts in recent months despite market headwind this year, including Bain Capital’s $3.1 billion deal for Olympus Corp’s microscope unit.