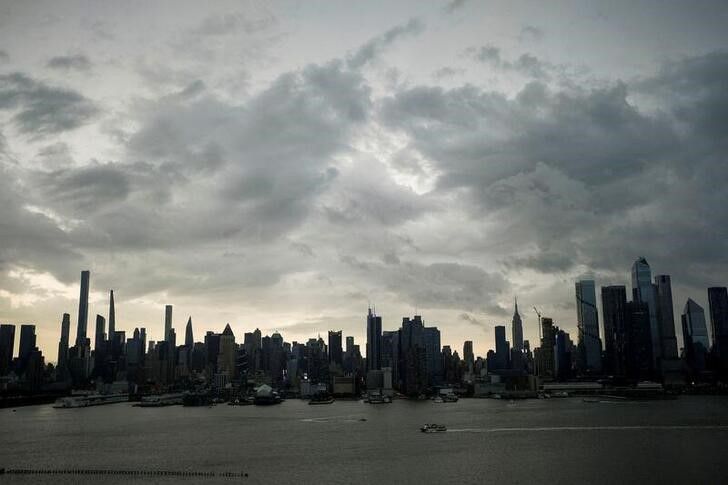 Rain clouds cover the skyline of Manhattan at the start of the Memorial Day weekend, as seen from Weehawken, New Jersey, U.S., May 27, 2022. REUTERS/Eduardo Munoz

Raul Gorrin, who owns Venezuelan TV channel Globovision, paid $18.8 million for the 4,500-square-foot, 47th floor unit in the Baccarat Hotel & Residences in November 2017, at the height of Venezuela’s economic collapse.

Now, Gorrin stands to lose the apartment, which boasts views of the Empire State Building and Central Park, after being sanctioned in January 2019 as part of the Trump administration’s push to oust Maduro. The city’s sheriff is scheduled to conduct the auction on July 6, previously-unreported court records show.

Sanctions block those designated from accessing the U.S. financial system, freeze their U.S. assets and generally bar Americans from transacting with them.

In sanctioning Gorrin, Washington said he bribed Venezuela’s treasury for the right to conduct currency exchange transactions that siphoned billions of the country’s funds to insiders.

The U.S. Treasury Department’s Office of Foreign Assets Control (OFAC), which enforces sanctions, said Gorrin also bought gifts for Maduro’s wife, Cilia Flores, who was sanctioned in 2018. Venezuela’s information ministry did not respond to a request for comment.

Gorrin faces U.S. criminal charges in Florida over the alleged graft. His lawyers did not respond to requests for comment. Gorrin, who remains a fugitive and is believed to be in Venezuela, has not responded to the charges.

Since being sanctioned, Gorrin has missed more than $600,000 in monthly condominium charges and late fees for his apartment, according to lawsuits the condominium board filed in a New York state court. The apartment’s common charges exceed $10,000 per month, court records show.

The unit is formally owned by RIM Group Properties of New York II Corp, which Gorrin controls, according to corporate records.

Gorrin said in a 2020 filing that sanctions prohibited him from paying condominium charges. He said he asked OFAC for a license to pay, but was not approved.

Daniel Ruzumna, a partner at law firm Patterson Belknap, said sanctions can pose difficulties for those “unwittingly caught up in the web.”

“They may not be sanctioned themselves, but they may have interactions with those who are under sanctions. Case in point is this particular condo group,” Ruzumna said.

OFAC did not respond to a request for comment.

The board won a court order in August 2020 to collect $184,876 from RIM Group for late payments in 2019, court records show. The board is seeking another judgment for missed payments from 2020 onwards.

Last year, the board received OFAC’s permission to sell the unit to collect the money, according to the license, obtained by Reuters under the Freedom of Information Act. The license was renewed in February, court records show.

Any additional funds must be deposited into a blocked account in RIM Group’s name, which Gorrin could not access while he remains sanctioned.

Maduro remains in power, and accuses Washington of trying to oust him in a coup. Globovision, which once extensively covered protests against Maduro’s predecessor Hugo Chavez, softened its criticism of the government after Gorrin bought the channel in 2013, reporters said at the time.