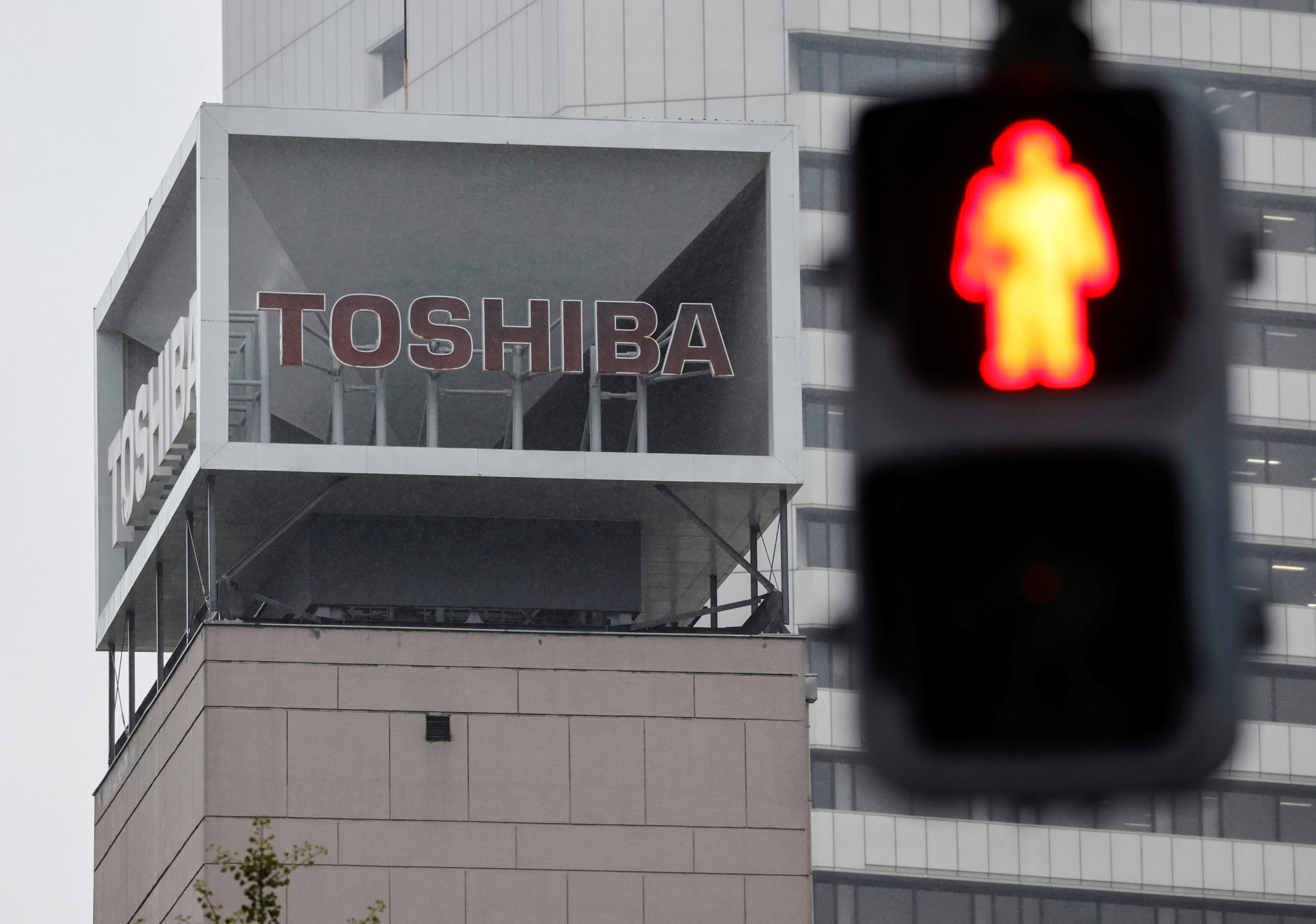 The logo of Toshiba Corp. is seen next to a traffic signal atop of a building in Tokyo, Japan November 9, 2021. REUTERS/Issei Kato

TOKYO, Nov 24 (Reuters) – Toshiba Corp’s (6502.T) second-largest shareholder on Wednesday objected to the Japanese conglomerate’s plan to split itself into three companies and called on it to instead solicit offers from potential buyers.

Hedge fund 3D Investment Partners, which owns more than 7% of Toshiba, laid out its objections in a three-page letter to the company’s board, becoming the first major shareholder to formally oppose the break-up plan outlined this month.

The letter, seen by Reuters, highlights shareholder discomfort over Toshiba’s proposal – an unease reflected in the company’s recent weak stock performance – and raises the possibility that the break-up may struggle to win approval at a shareholder meeting early next year.

A Toshiba spokesperson said it does not comment on individual exchanges with shareholders. 3D declined to comment.

The proposed break-up is “extremely unlikely” to resolve any of Toshiba’s current problems and “is instead very likely to create three underperforming companies in the image of today’s Toshiba,” Singapore-based 3D said in the letter.

Some other hedge fund shareholders have also told Reuters, on condition of anonymity, that they were disappointed Toshiba had turned down the idea of going private.

In its letter, 3D said Toshiba should “open a formal process, develop a compelling plan for each of the businesses, provide detailed diligence materials and management meetings to interested financial and strategic parties, encourage and enable stretch proposals from those parties and evaluate the best path forward”.

While the review committee never conducted an auction process with due diligence for a possible sale, it has said talks with private equity firms suggested potential offers were “not compelling relative to market expectations”.

The review committee, which consists of five external board directors, has said it did not receive any bona fide proposals to take the company private. The idea of going private, it has said, raised concerns inside Toshiba.

However, in its letter – which was also addressed to the review committee – 3D criticised the committee for what it said was a failure to ask for proposals for the sale of Toshiba, or the partial disposition of some of its businesses.

“Overly reliant upon an intransigent management team’s uninspired projection model and dubious claims of regulatory, employee morale and customer concerns about a different ownership structure, the (committee) appears to have compromised its review and relented,” the fund said.

3D, founded by former Goldman Sachs banker Kanya Hasegawa in 2015, was one of dozens foreign hedge funds that participated in a $5.4 billion capital injection Toshiba received during a crisis stemming from the bankruptcy of its U.S. nuclear power unit in 2017.

In addition to Toshiba, 3D has stakes in a number of smaller Japanese firms including IT company Fuji Soft Inc (9749.T), textile and technology firm Daiwabo Holdings Co Ltd (3107.T) and music publisher Avex Inc (7860.T), according to Refinitiv data based on filings this year.

It also owns a stake U.S.-based biotech MediciNova Inc (MNOV.O), according to Refinitv.

Founded in 1875, Toshiba plans to house its energy and infrastructure divisions in one company while its hard disk drive and power semiconductor businesses will form the backbone of another. A third will manage Toshiba’s stake in flash-memory chip company Kioxia Holdings and other assets.

Toshiba plans to complete the overhaul by March 2024.

Shares of Toshiba have dipped more than 4% since the plan was first reported by the Nikkei business daily on Nov. 8.