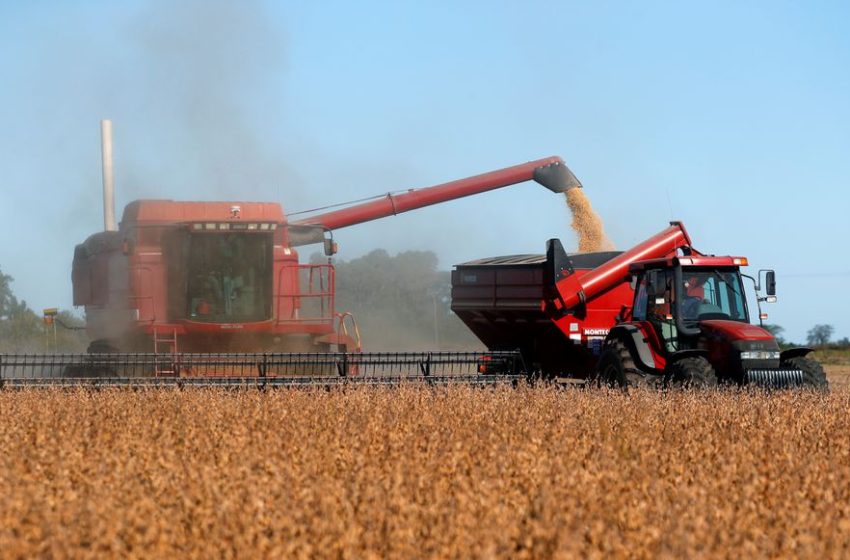 A combine harvester is used to harvest soybeans on a farmland in Chivilcoy, on the outskirts of Buenos Aires, Argentina April 8, 2020. REUTERS/Agustin Marcarian

MUMBAI, Feb 18 (Reuters) – Indian traders have contracted to import a record 100,000 tonnes of soyoil from the United States because of limited supplies from drought-hit South America, at a time when prices of rival palm oil are scaling record highs, three dealers told Reuters.

The higher purchases from the United States are expected to support U.S. soy oil prices , which have climbed nearly 20% this year to close to their highest in a decade, fuelling worries about food inflation.

The world’s biggest edible oil importer traditionally buys soyoil from Argentina and Brazil, but lower bean output in these two leading exporters of the commodity forced New Delhi to turn to the United States, they said.

“Indian buyers have bought U.S soyoil vessels. Prices were attractive and supplies were not enough in South America,” said the India head of a global trading firm, who sought anonymity because of the company’s policy.

“Buying of another two vessels in the short term is possible.”

India usually gets two-thirds of its soyoil needs from Argentina, and the rest from Brazil.

But last season’s reduced soybean output has tightened soyoil reserves in Argentina, forcing Indian buyers to shop around for alternatives, such as sunoil from the Black Sea region.

“Sunflower oil is cheaper than palm and soyoil, but some buyers are sceptical about deliveries because of geopolitical tension (in Russia),” said Sandeep Bajoria, chief executive of Sunvin Group, a vegetable oil brokerage and consultancy firm.

“They are going with soyoil.”

Crude palm oil (CPO) is being offered at about $1,575 a tonne, including cost, insurance and freight (CIF), in India for March shipments, compared with $1,620 for crude soybean oil and $1,515 for crude sunflower oil, traders said.

Soyoil was cheaper than palm and sunflower oil last month, but the sudden jump in soyoil demand has lifted prices by 16% in a month to the highest in 14 years, traders said.

India gets nearly two-thirds of its edible oil needs through imports, mainly palm oil from Indonesia and Malaysia.

But Indonesia’s decision to curb palm oil exports has lifted the price of the tropical oil to a record and created scarcity in the edible oil market, said a Mumbai-based dealer with a global trading firm.

“Edible oil importers were looking for an alternative in the form of soyoil, but massive output reduction is going on for the soybean crop in South America,” the dealer said.

This month, Brazilian statistics agency Conab slashed its soy output estimate for the 2021/2022 cycle by about 15 million tonnes, while Paraguay’s soybean harvest could fall by as much as half.

In addition, lower water levels on Argentina’s key Parana river have left it struggling to fully load soybean vessels, so that cargo sizes have been reduced by up to 30%.

On the other hand, the United States faces a potential surplus of soyoil after the Biden administration proposed cutting the biofuel blending mandate, another dealer with a trading firm said. read more

Indian traders also signed deals to import 30,000 tonnes of soyoil from the Black Sea region, but port congestion is delaying shipments, said the India head of a global trading firm.