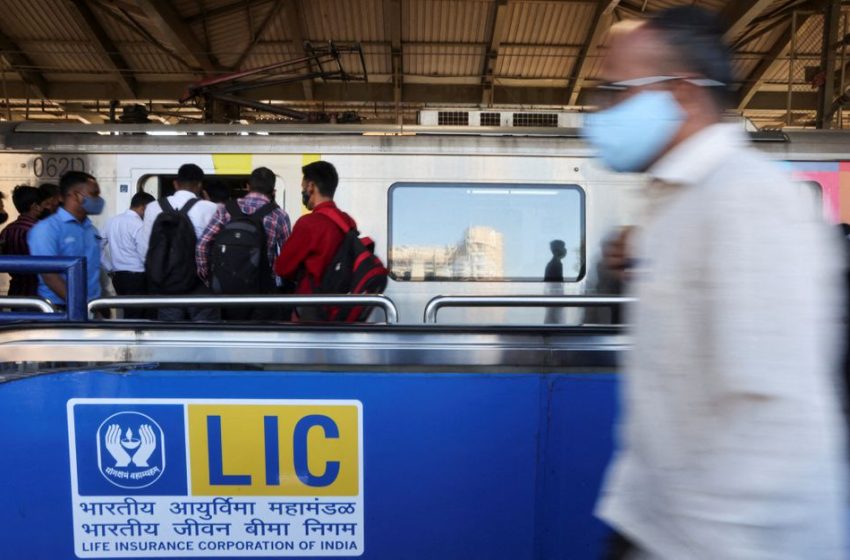 A man walks past a Life Insurance Corporation of India (LIC) logo at a metro station in Mumbai, India, January 31, 2022. REUTERS/Francis Mascarenhas

NEW DELHI, Feb 3 (Reuters) – State-run Life Insurance Corporation of India’s (LIC) embedded value has been finalised at more than 5 trillion rupees ($66.82 billion), a government official who is overseeing what is expected to be the country’s largest IPO said on Thursday.

Investors are eagerly waiting for the government to indicate LIC’s embedded value – a measure of future cash flows in life insurance companies and the key financial gauge for insurers – when it releases the initial public offering (IPO) draft prospectus, expected in a matter of days.

While there has been speculation about the number in Indian media – from as low as $53 billion to as high as $150 billion – this is the first time the government, which owns 100% of LIC, has commented on the matter.

The embedded value will help establish the market valuation of LIC and determine how much money the government raises in the flotation. That will be crucial for the government to help meet its divestment targets and keep its fiscal deficit in check.

“I would say the embedded value could be more than 5 trillion rupees and the enterprise value will be multiples of that,” Tuhin Kanta Pandey, secretary, department of divestment, told Reuters in an interview.

Media reports in India have projected LIC’s market valuation at around four times the embedded value.

LIC has a majority share of the life insurance market in India. The government, which hopes to raise as much as $12 billion from selling a stake in the IPO, expects the proceeds will help it bridge a deficit gap this fiscal year.

Pandey said the government planned to issue a draft IPO prospectus to investors as early as next week.

Prime Minister Narendra Modi’s government slashed its divestment target to 780 billion rupees ($10.43 billion) in the year ending in March, from an earlier budgeted target of 1.75 trillion rupees. It is banking on LIC’s initial public offering to meet its revised target.

It has so far raised about 120 billion rupees by selling stakes in other companies. Selling 5% of LIC’s stock to gain that amount could be ideal but the government was also willing to sell as much as 10%, government and banking sources have said.

Pandey, however, declined to disclose the size of the stake the government would sell in the first round.

He said after selling national carrier Air India successfully, the listing of the LIC would be a major event for markets, aiming to attract retail investors and to build a public opinion about the privatisation.

“It is the LIC moment for Indian markets and it will add depth,” he said noting that it could help attract more investors to invest in state-run companies.

The listing of LIC could make it as one of the top five largest companies in terms of market cap, joining the club of Reliance Industries (RELI.NS), TCS (TCS.NS) and HDFC Bank (HDBK.NS).

LIC is not likely to issue fresh shares in the primary market and the entire issuance is likely to be sold in the secondary market, Pandey said.

“I don’t see any need for capital for LIC, it is sufficiently capitalised,” he said, adding LIC could sell its stake in IDBI Bank (IDBI.NS) in the next fiscal year.

Under the current plans, the government would keep its majority of its stake in the LIC.

The stake cannot come below 51% by law and that will be retained, he said, and even in 5 years it could not sell more than 25% of its stake in LIC.