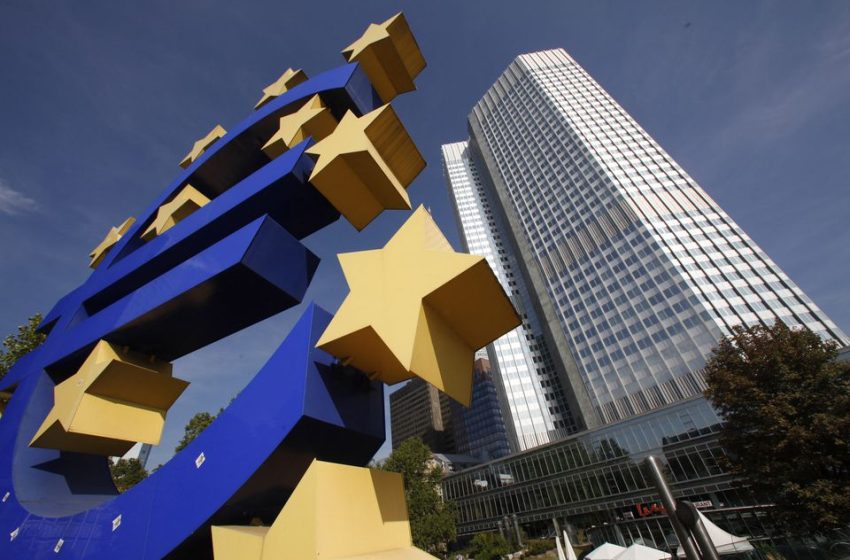 A huge Euro logo is pictured past the headquarters of the European Central Bank (ECB) in Frankfurt, September 29, 2011. REUTERS/Ralph Orlowski

FRANKFURT, Feb 7 (Reuters) – The European Central Bank could end its stimulus programme earlier than planned but it is unlikely to raise its main interest rate in July as investors are expecting, ECB policymaker Martins Kazaks told Reuters.

Investors have brought forward their bets on the bank’s first rate hike in more than a decade after ECB President Christine Lagarde on Thursday opened the door to such a move and acknowledged mounting inflation risks. read more

But Kazaks, who is Latvia’s central bank governor, pushed back against market bets on a July move because this would imply a complete winding down, or “tapering” of the ECB’s bond purchases before that date.

“July would imply an extremely and unlikely quick pace of tapering,” Kazaks said in an interview. “But overall, at the current juncture, naming a specific month would be much premature.”

The ECB has long said it would end its bond purchases “shortly before” raising its deposit rate from minus 0.5%, and Lagarde and colleagues have reaffirmed that commitment in recent days.

Asset purchases are currently set to run at least until October although sources have told Reuters the ECB is likely to bring that date forward at its March 10 meeting.

With euro zone inflation at a record 5.1% in January – more than twice the ECB’s 2% goal – Kazaks was also open to action.

“If we see that inflation remains high and the labour market remains strong or strengthens further, if we see that the economy keeps going, the direction is clear: we may act sooner than we assumed in the past,” the 48-year old economist said.

Kazaks noted that wages, a key driver of growth in prices, had surprisingly failed to pick up, but he still saw mounting risk that high inflation persisted in the euro zone, lessening the need for ECB largesse.

He favoured laying out a new “roadmap” for how bond purchases would be reduced rather than setting the pace at every policy meeting, which would create “recurrent cliff effects” for the bond market.

Euro zone government bond yields rose across the board on Monday. Italian bonds, which are highly sensitive to ECB’s purchases due the country’s high debt burden, were among the worst performers.

Kazaks singled out a potential war between Russia and Ukraine as the biggest risk to the ECB’s policy path.

“If a war breaks out, God forbid, we reassess the baseline scenario and act accordingly,” he said.

Money markets have priced in a 15 basis point rise in the ECB’s deposit rate in July, plus nearly a further 40 basis points by December.

The ECB’s deposit rate has been below 0%, meaning banks are charged to park their spare cash at the central bank overnight, since 2014.

Dutch central bank governor Klaas Knot said on Sunday he expected the first ECB rate rise to come in the fourth quarter of this year. France’s Francois Villeroy de Galhau said on Friday that markets shouldn’t “rush to conclusions” about the timing of any ECB move, while Slovakia’s Peter Kazimir said the ECB “will be wiser in March” when it has more data. L8N2UF470 read more