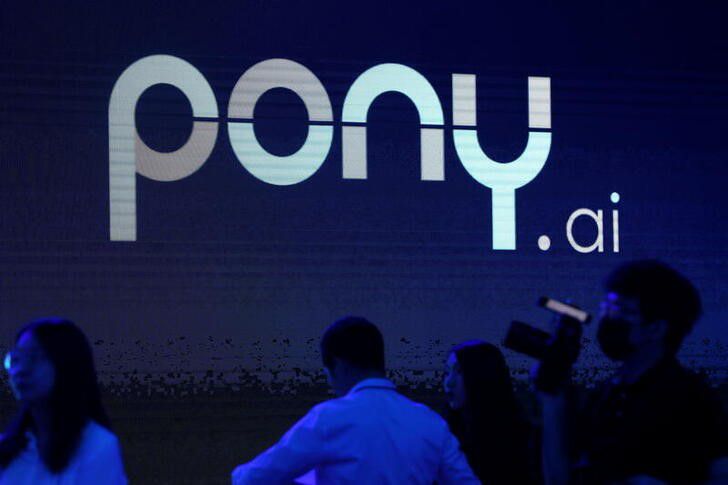 File photo: A logo of the autonomous driving technology startup Pony.ai is seen on a screen during an event in Beijing. REUTERS/Tingshu Wang

Aug 11 (Reuters) – Autonomous driving startup Pony.ai has put on hold plans to go public in New York through a merger with a blank-check firm at a $12 billion valuation, after it failed to gain assurances from Beijing that it would not become a target of a crackdown against Chinese technology companies, people familiar with the matter said.

The decision makes Pony.ai one of the biggest companies to suspend its U.S. listing plans after China banned ride-sharing giant Didi Global Inc(DIDI.N) from signing up new users just days after its blockbuster initial public offering (IPO) in June.

It followed up with crackdowns on other Chinese technology firms over concerns about the safety of user data, which led to some companies, such as LinkDoc Technology (LDOC.O) and Hello Inc, scrapping their U.S. listing plans. read more

The Toyota Motor Corp (7203.T)-backed startup will now seek to raise money in a private fundraising round at a valuation of $12 billion, said the sources, who requested anonymity because the matter is confidential. It still hopes for a U.S. listing in the unlikely event it receives a green light from the Chinese government imminently, the sources added.

Operating in both the United States and China, Pony.ai maintains a significant presence in Chinese cities including Beijing and Guangzhou, where it launched commuter pilots and signed partnerships with Chinese state-owned auto groups.

It was concerned that the Chinese regulators could take action if it proceeded with a U.S. stock market debut, even through merging with a special-purpose acquisition company (SPAC) instead of an IPO, the sources said. Details of Pony.ai’s discussions with the Chinese authorities could not be learned.

Pony.ai had been in exclusive talks to go public through a merger with VectoIQ Acquisition II (VTIQ.O). The deal would have been financed with a private placement from investors of roughly $1.2 billion, and the company had aimed to list by October, according to the sources.

A spokesperson for Pony.ai said the company has no current plan or timeline to go public and declined to comment on the talks. The Cyberspace Administration of China, which has been leading the crackdown on technology companies such as Didi, did not immediately respond to a request for comment. VectoIQ declined to comment.

Had Pony.ai gone ahead with the listing, it would also have faced U.S scrutiny. The U.S. Securities and Exchange Commission said last month it would not allow Chinese companies to raise money in the United States unless they fully explain their legal structures and disclose the risk of Beijing interfering in their businesses. read more

The Committee on Foreign Investments in the United States, which reviews deals of companies with foreign ties for potential national security risks, has also been scrutinizing SPAC deals.

Pony.ai CEO James Peng told Reuters in June that the company was considering going public in the United States to help fund its goal of commercializing driverless ride-hailing services. He provided no details of how this would happen. read more

SPACs, which raise money through their IPOs to buy private companies within a certain time frame, have become a popular way for self-driving tech companies to go public.

In May, Plus, an autonomous truck company with operations and partnerships in China, clinched a deal to go public through a $3.3 billion merger with Hennessy Capital Investment Corp V (HCIC.O), before China’s technology crackdown. read more That deal is still expected to close by the third quarter.

Pony.ai, which develops and tests its autonomous driving vehicles in the United States and China, said in November that its valuation reached $5.3 billion after raising more than $1 billion in funding.

In June, the company hired Lawrence Steyn, vice chairman of investment banking at JPMorgan Chase & Co (JPM.N), as its chief financial officer to prepare for a public listing. read more