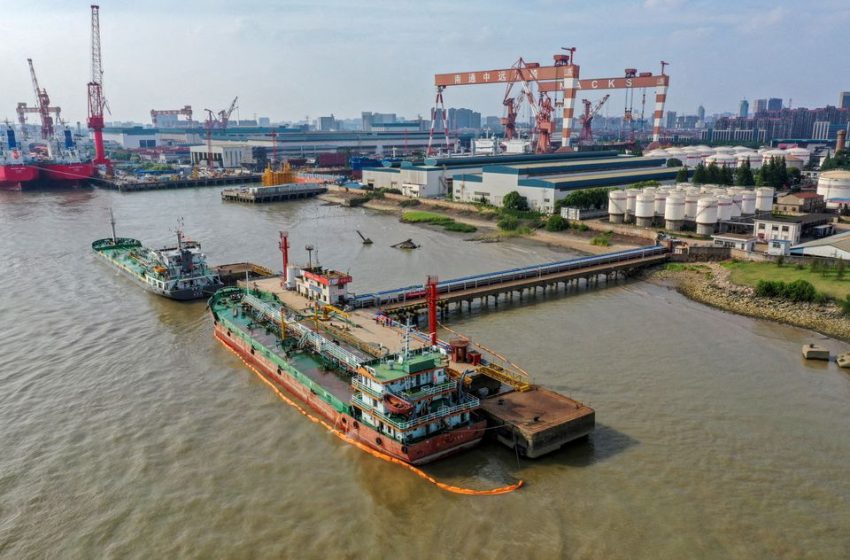 SINGAPORE, May 20 (Reuters) – China is quietly ramping up purchases of oil from Russia at bargain prices, according to shipping data and oil traders who spoke to Reuters, filling the vacuum left by Western buyers backing away from business with Russia after its invasion of Ukraine in February.

The move by the world’s biggest oil importer comes a month after it initially cut back on Russian supplies, for fear of appearing to openly support Moscow and potentially expose its state oil giants to sanctions. read more

China’s seaborne Russian oil imports will jump to a near-record 1.1 million barrels per day (bpd) in May, up from 750,000 bpd in the first quarter and 800,000 bpd in 2021, according to an estimate by Vortexa Analytics.

Unipec, the trading arm of Asia’s top refiner Sinopec Corp (600028.SS), , is leading the purchases, along with Zhenhua Oil, a unit of China’s defense conglomerate Norinco, according to shipping data, a shipbroker report seen by Reuters and five traders. Livna Shipping Ltd, a Hong Kong-registered firm, has also recently emerged as a major shipper of Russian oil into China, the traders said.

The firms are filling the hole left by western buyers after Russia’s invasion of Ukraine, which Russia calls a “special military operation.”

The United States, Britain and some other key oil buyers banned imports of Russian oil shortly after the invasion. The European Union is finalizing a further round of sanctions, including a ban on Russian oil purchases. Many European refiners have already stopped buying from Russia for fear of running afoul of sanctions or drawing negative publicity.

Vitol and Trafigura, two of the world’s biggest commodity traders, phased out purchases from Rosneft, Russia’s biggest oil producer, ahead of an EU rule that came into effect on May 15 barring purchases unless “strictly necessary” to secure the EU’s energy needs. read more

“The situation began taking a drastic turn after the exit of Vitol and Trafigura that created a vacuum, which could only be filled by companies that can provide value and are trusted by their Russian counterparts,” one Chinese trader, who asked not to be named, told Reuters.

The low price of Russia’s oil – spot differentials are about $29 less per barrel compared with before the invasion, according to traders – is a boon for China’s refiners as they face shrinking margins in a slowing economy. The price is well below competing barrels from the Middle East, Africa, Europe and the United States. read more

China separately receives some 800,000 bpd of Russian oil via pipelines under government deals. That would bring May imports to nearly 2 million bpd, 15% of China’s overall demand. For Russia, oil sales are helping to cushion the blow to its economy from sanctions.

State-owned Chinese companies, led by Sinopec and Zhenhua, are set to buy two thirds of Russia’s flagship Far Eastern export grade ESPO (Eastern Siberia–Pacific Ocean oil pipeline) blend in May, up from a third before the invasion of Ukraine, traders who closely monitor the flows told Reuters. Russia exported about 24 million barrels in May, 6% higher than April.

Sinopec alone is likely to buy at least 10 ESPO shipments in May, doubling its volume before the invasion, with some of the trades hitting a record discount of $20 a barrel below benchmark Dubai crude on FOB Kozmino basis, three of the traders said.

Zhenhua, the smallest state-owned Chinese oil trader, has chartered ships to move Russian oil, according to shipping data and traders with knowledge of the matter. North Petroleum International Co, a unit of Zhenhua, loaded two ESPO shipments in early May, and another two cargoes of Urals from Baltic Sea port Ust-Luga in late April and mid-May, according to data from Refinitiv and Vortexa, a shipbroker report and traders.

Norinco, one of the world’s largest defence contractors, branched into oil more than two decades ago, winning a concession to produce oil in Iraq in the 1990s. Its trading vehicle Zhenhua recently expanded into gas terminal investment and trading. read more

Zhenhua has bought some of its supply of Russian oil via Switzerland-based Paramount Energy, a trader specializing in marketing oil from independent Russian and Kazakhstan producers to mostly private end-users, said two traders with knowledge of the matter.

A regular marketer of ESPO to China’s independent refiners since 2016, Paramount Energy expanded its China business by boosting sales to Zhenhua after it set up a Beijing office in 2020, said the trading executives.

In response to Reuters’ questions, Paramount Energy did not address trades made after Russia’s invasion of Ukraine. It said it “has customers in China for ESPO crude cargoes delivered under long-term contracts established well before Feb. 24,” the date of the invasion. “This crude is supplied exclusively by independent oil producers and non-state companies, as has long been our policy.”

Livna, which has not previously been a major player in taking Russian oil to Asia, has since late April loaded over 7 million barrels of Russian Urals and ESPO crude bound for China, according to ship-tracking data from Vortexa and Refinitiv.

So far in May, Livna has loaded eight cargoes, or nearly 6 million barrels of ESPO oil, destined for China, up from one or two cargoes each month earlier in this year, shipping data showed. Livna also loaded at least two Urals shipments from Baltic ports in May for delivery to China, traders told Reuters.