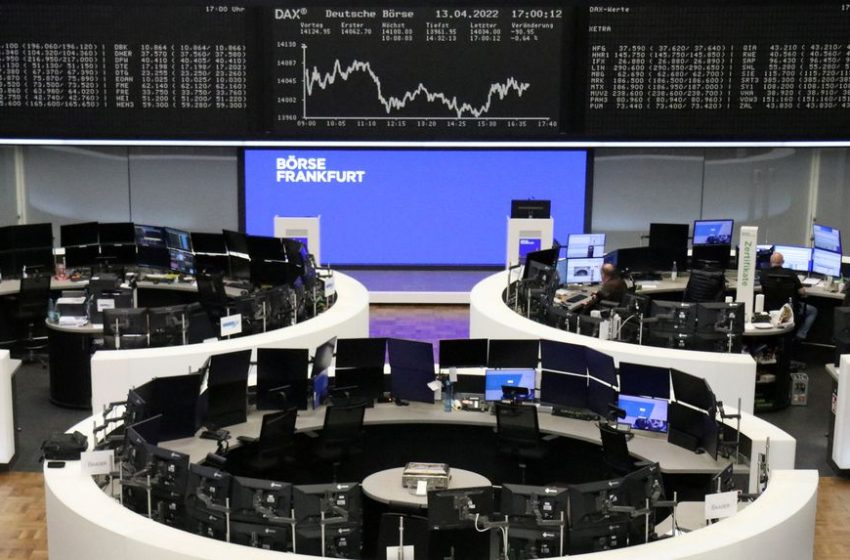 April 19 (Reuters) – European shares were set for their worst day in nearly two weeks on Tuesday as worries about the war in Ukraine, aggressive monetary policy tightening by the U.S. Federal Reserve and a batch of upcoming earnings kept investors on edge.

The pan-European STOXX 600 (.STOXX) lost 0.8% after dropping 0.9% last week. Travel (.SXTP) shares were among the biggest decliners after gaining the most on Friday.

Russian forces tried to push through Ukrainian defences along almost the entire front line in eastern Ukraine on Tuesday, launching what President Volodymyr Zelenskiy called the “Battle of the Donbas”, the long-awaited second phase of the war. read more

“There is a cocktail of headwinds facing markets this week, but any suggestion that Ukraine tensions are going to be prolonged, or more violent, is enough to mute sentiment in markets,” said Sophie Lund-Yates, lead equity analyst at Hargreaves Lansdown.

All regional markets were in the red. The benchmark STOXX 600 has logged two straight weeks of declines.

“There are also growing concerns of recession. Rising interest rates at a time when economic activity is slowing down makes for very difficult conditions,” Lund-Yates said.

The European Central Bank on Thursday confirmed plans to end its stimulus scheme in the third quarter, but avoided any firm pledge, stressing that policy is flexible. read more

St. Louis Federal Reserve Bank President James Bullard repeated his case for increasing interest rates to 3.5% by the end of the year on Monday, saying U.S. inflation is “far too high”. read more

Adding to nervousness, the World Bank on Monday cut its global growth forecast for 2022 by nearly a full percentage point, to 3.2% from 4.1%, following the Ukraine crisis. read more

While the earnings season for companies in Europe has so far been mixed, focus will be on firms reporting this week such as Accor (ACCP.PA) and L’Oreal (OREP.PA).

France’s CAC 40 (.FCHI) led losses among major peers, down 0.6%. Investors will also be keeping an eye on the country’s presidential election’s runoff vote on Sunday.

Scor (SCOR.PA) fell 3.9% after the French reinsurer said it expects to book charges for claims related to the Ukraine conflict.

Reporting by Anisha Sircar in Bengaluru; Editing by Shounak Dasgupta