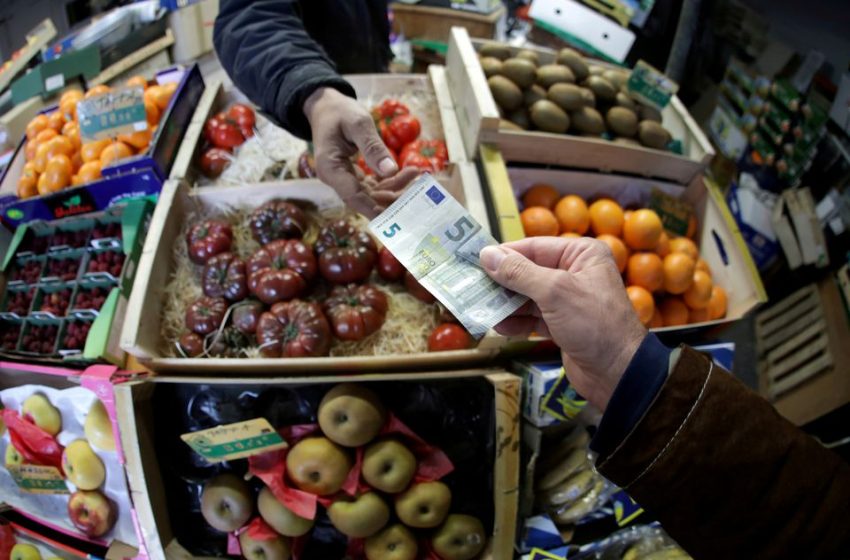 A shopper pays with a euro bank note in a market in Nice, France, April 3, 2019. REUTERS/Eric Gaillard

FRANKFURT, July 29 (Reuters) – Euro zone inflation rose to another record high in July and its peak could still be months away, keeping pressure on the European Central Bank to opt for another big interest rate increase in September.

Consumer price growth in the 19 countries sharing the euro currency accelerated to 8.9% in July from 8.6% a month earlier, far above expectations for 8.6% and well clear of the ECB’s 2% target, data from Eurostat, the EU’s statistics agency, showed on Friday.

Inflation was initially driven by post-pandemic supply bottlenecks but more recently the fall-out of Russia’s war in Ukraine has been the main culprit as it has pushed up energy, metals and food prices.

Fearing that price growth is spiralling out of control, the ECB raised rates by 50 basis points this month, breaking its own guidance for a smaller move, and promised further rate hikes to prevent the onset of a hard-to-break wage-price spiral.

But inflation is also a dilemma for the bank. Sky high food and energy costs deplete savings and ultimately slow growth, possibly pushing the bloc into recession, in the worst case.

Still, the ECB has made clear that inflation fears trump growth concerns, suggesting that policymakers are willing to lift rates even if that hurts growth, as inflation is now at risk of getting embedded.

Indeed, underlying inflation, which strips out volatile food and fuel prices, accelerated to 5.0% from 4.6%, more than twice the ECB’s 2% target. An even narrower measure, which excludes alcohol and tobacco, meanwhile rose to 4.0% from 3.7%.

Supporting arguments for persistent price pressures, the labour market has never been tighter in the two-decade history of the euro zone.

The jobless rate is a record low 6.6% while employment is at its highest level, suggesting that wage pressures, a precondition of durable inflation, are already in the pipeline.

Markets are now pricing a 35-basis-point rate hike for September, suggesting that investors are split between a 25- and a 50-basis-point move.

They also expect a combined 90 basis points of moves by the end of the year, or a hike at all three remaining policy meetings.

Expectations, however, have been pared back in recent weeks as a recession, possibly induced by the loss of access to Russian gas, is seen persuading the ECB to follow a gentler rate path.

The ECB will next meet on Sept. 8.