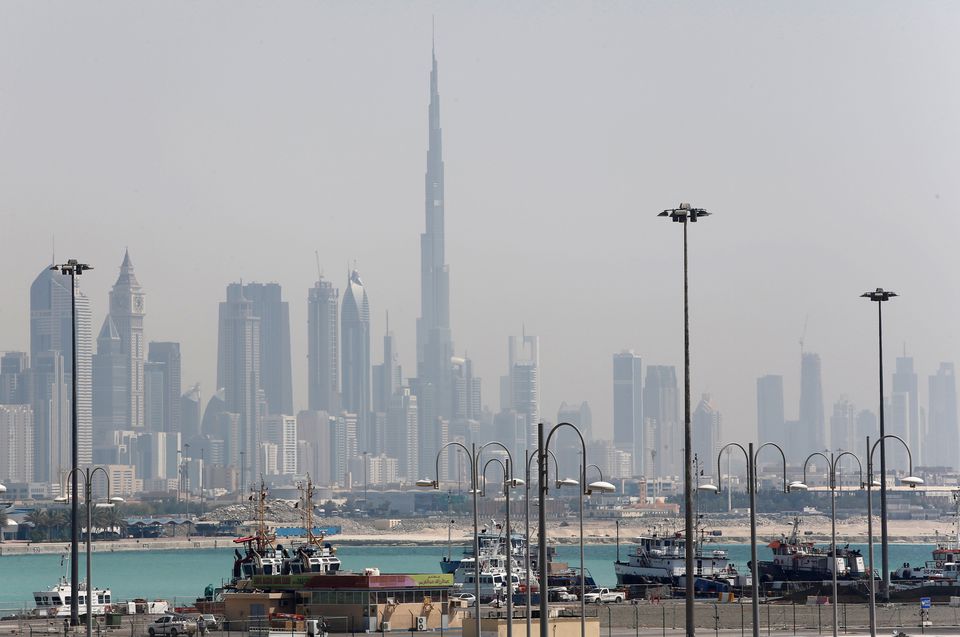 The skyline is seen with the Burj Khalifa as ships dock at Port Rashid, in Dubai May 26, 2013. REUTERS/Ahmed Jadallah/File Photo

DUBAI, Aug 13 (Reuters) – Israel and the United Arab Emirates, which normalised relations a year ago, are looking to Dubai’s Expo world fair in October to boost bilateral trade, which now stands at around $712 million.

While the figure, contained in Israeli data, is tiny compared to UAE exports of $24 billion in 2019 to its top destination Saudi Arabia, the Israeli government sees trade with the UAE rising to $1 billion by year-end.

Israel is aiming for $3 billion in three years, it said this week on its Arabic-language Twitter account.

The UAE, which in a seismic move last August became the first Gulf state to normalise ties with Israel, promoted the accord’s economic benefits.

In September, the UAE and Bahrain both inked U.S.-brokered deals to establish ties with Israel, followed by Sudan and Morocco.

The bulk of trade between the UAE and Israel, which have similar GDPs of around $400 billion, has involved imports from the Gulf’s dominant logistics and re-export hub, including plastics, electronics, auto parts and gems.

Israel recorded $457 million of imports from the UAE between January 2020 and June this year, and $255 million in exports to the UAE, its Central Bureau of Statistics said.

Dubai, which contains the region’s largest transhipment port at Jebel Ali, said in January that bilateral trade since September 2020 stood at $272 million.

Zeev Lavie of the Israeli Chambers of Commerce (FICC) said normalisation had expanded Israeli trade within the wider Middle East via the UAE. “We’re becoming much more regional,” he said.

Israel has traditionally exported to Arab countries via other states, or through complex structures outside the region.

Lavie said the UAE pact was encouraging trade with Egypt and Jordan, with which Israel has had peace deals for decades.

“A lot of the business community in those countries have seen that, no, it’s okay to do business in Israel … We’ve seen much more interest from business people,” he said.

The outgoing head of mission at the Israeli embassy in the UAE, Eitan Na’eh, said quite a few agreements were to be signed in coming months, with a series of ministers visiting Dubai Expo 2020, the world fair opening in October after a one-year pandemic delay.

“We need to really get down to work on institutional relationships between our financial institutions, the banks, the funds, the big business,” Na’eh told Reuters.

Israel has said it plans to open an economic attache office in Abu Dhabi this summer, and the UAE and Israel have been discussing a Free Trade Agreement.

To date, 10 government-to-government agreements have been signed between the two countries including double taxation, visas, financial services and money laundering agreements.

Publicly announced deals include around 40 memorandums of understanding and around 30 other types of strategic, cooperation or distribution agreements related to the financial, energy, sports, agriculture, aviation, aerospace and media sectors as well as investment promotion and COVID-19 technology.

But a $3 billion fund announced by the U.S., Israel and the UAE to encourage private-sector investment and regional cooperation has gone quiet, as has a $10 billion fund of UAE private and state money announced in March to invest in Israeli strategic sectors.

“It takes some time for trade links to be established and the pandemic almost certainly complicated this,” Jan Friederich, Senior Director at Fitch Ratings said.Reporting by Lisa Barrington; Additional reporting by Steven Scheer and Alexander Cornwell; Editing by Alexander Smith