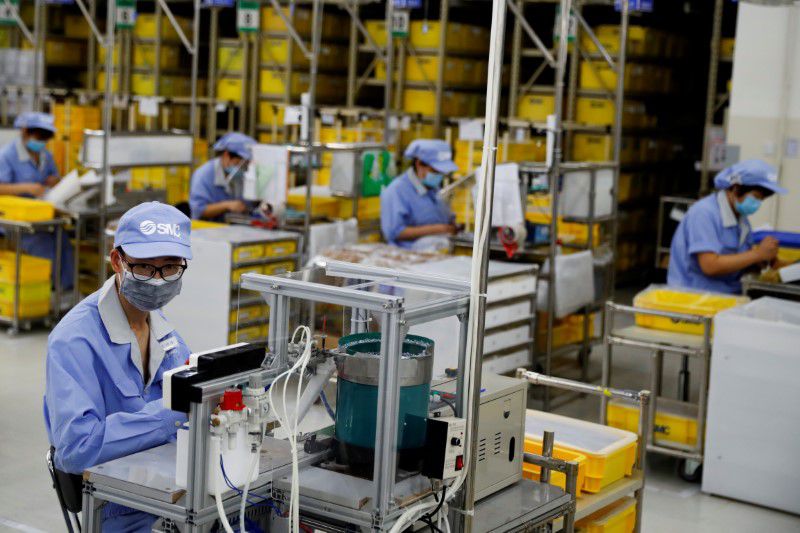 Employees wearing face masks work at a factory of the component maker SMC during a government organised tour of its facility following the outbreak of the coronavirus disease (COVID-19), in Beijing, China May 13, 2020. REUTERS/Thomas Peter/File Photo

The world’s second-biggest economy is on track to expand more than 8% this year but analysts say pent-up coronavirus demand has peaked and forecast growth to moderate amid supply chain bottle necks and outbreaks of the Delta variant of COVID-19.

The producer price index (PPI) grew 9.0% from a year earlier, matching the high seen in May, the National Bureau of Statistics (NBS) said in a statement on Monday. Analysts in a Reuters poll had expected the PPI to rise 8.8%, unchanged from June.

China’s economy has largely recovered from disruptions caused by the COVID-19 pandemic, but the expansion is losing steam as businesses face intensifying strains from higher commodity prices and global supply chain bottlenecks.

“We believe domestic inflationary pressure is largely controllable, and Beijing will unlikely overreact to the stronger-than-expected July inflation data,” analysts from Nomura wrote in a note.

“Instead, we expect Beijing to maintain its unique policy mix of ‘targeted tightening + universal easing’ through the remainder of this year.”

China cut the amount of cash that banks must hold as reserves in July, releasing around 1 trillion yuan ($154.40 billion). Many analysts expect another cut later in the year.

The global spread of the more-infectious Delta variant of the virus and new outbreaks of cases at home, on top of recent heavy rainfall and floods in some Chinese provinces have also disrupted economic activity.

The PPI, a benchmark gauge of a country’s industrial profitability, inched up 0.5% on a monthly basis, accelerating from a 0.3% uptick in June.

Higher crude oil prices and increased demand for thermal coal as China copes with hot weather helped drive up prices, said Dong Lijuan, an official with NBS, in a statement released alongside the data.

Prices in the coal mining and washing and ferrous metal extraction industries jumped 45.7% and 54.6% in July year on-year, respectively.

China’s “zero tolerance” policy to COVID cases will probably put further stress on the supply chain, and inflation pressure may persist in the second half, said Zhang.

China reported 125 new cases of COVID-19 on the mainland for Aug. 8, with most local infections in the central province of Henan and the eastern province of Jiangsu. read more

Uncertainties caused by the fresh outbreak in China and government response measures led analysts from Goldman Sachs and Barclays to recently revise down their third quarter growth forecasts.

China, as the top steel consumer of both coal and iron ore, has stepped up efforts to tame rising commodity prices that have squeezed manufacturers’ margins, including stepping up inspections on trading platforms and releasing state reserves. read more

A separate NBS statement showed that the consumer price index (CPI) in July rose 1.0% from a year earlier, compared with a 1.1% gain in June and below the government target of around 3% this year.

The core consumer price index, which strips out volatile food and energy prices, stood at 1.3% on year, versus a 0.9% rise in June.