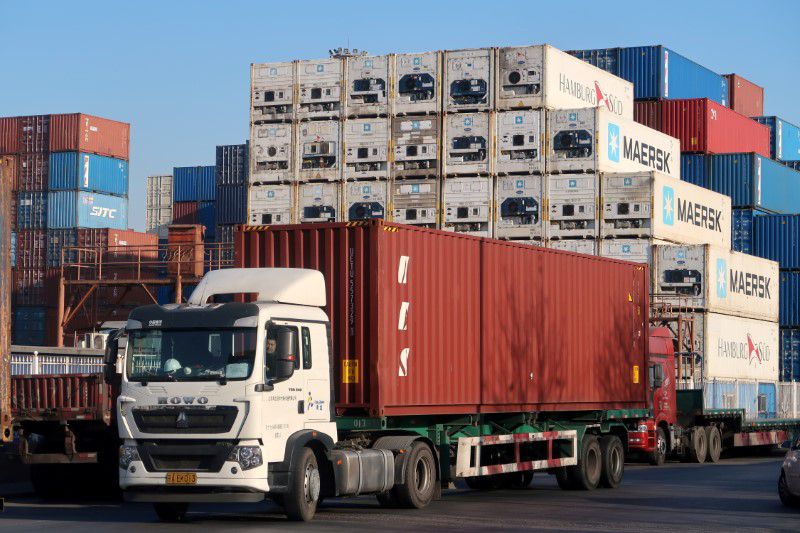 A worker drives a truck carrying a container at a logistics center near Tianjin port, in Tianjin, China December 12, 2019. REUTERS/Yilei Sun/File Photo

China’s export slowdown in July may signal more bumps ahead

BEIJING, Aug 7 (Reuters) – China’s export growth unexpectedly slowed in July following outbreaks of COVID-19 cases, while imports also lost momentum, pointing to a slowdown in the country’s industrial sector in the second half even as easing global lockdowns boost commerce.

The world’s biggest exporter has staged an impressive economic rebound from a coronavirus-induced slump in the first few months of last year after quickly containing the pandemic, and its rapid vaccination rollout has helped drive confidence.

But new infections in July, mainly caused by the highly transmissible Delta strain have spread to tens of Chinese cities, prompting local authorities to lock down affected communities, order millions to be tested and temporarily suspend operations of some businesses, including factories.

“The pandemic worsened in other Asian developing countries, which may have led to a relocation of trade toward China. But leading indicators suggest exports may weaken in coming months,” said Zhiwei Zhang, chief economist at Pinpoint Asset Management.

Aside from the drag from efforts to counter the spread of the Delta variant, Chinese exporters also struggled with an ongoing global semiconductor shortage, logistics bottlenecks, and higher raw material and freight costs.

“Although orders are recovering, there are too many uncertainties in the second half of the year, like how the domestic epidemic develops and the cost of raw materials. And at the same time, foreign production capacity is slowly picking up,” said an exports sales manager based in Suzhou surnamed Ye.

Imports in July rose a slower 28.1% from a year earlier, lagging a 33% increase forecast in the Reuters poll, and 36.7% growth the previous month. Demand has dropped in recent months for iron ore, a key ingredient in steelmaking.

China’s crude oil imports, however, rebounded in July from a six-month low as state-backed refiners ramped up output after returning from maintenance.

The slower Chinese shipments also reflected the moderation in U.S. business in July amid supply constraints, suggesting a cooling in the world’s biggest economy after what was expected to have been a robust second quarter. read more

Its trade surplus with the United States rose to $35.4 billion, Reuters calculations based on customs data showed, up from $32.58 billion in June.

The economy is on track to grow more than 8% this year but analysts say pent-up coronavirus demand has peaked and forecast that growth rates are starting to moderate.