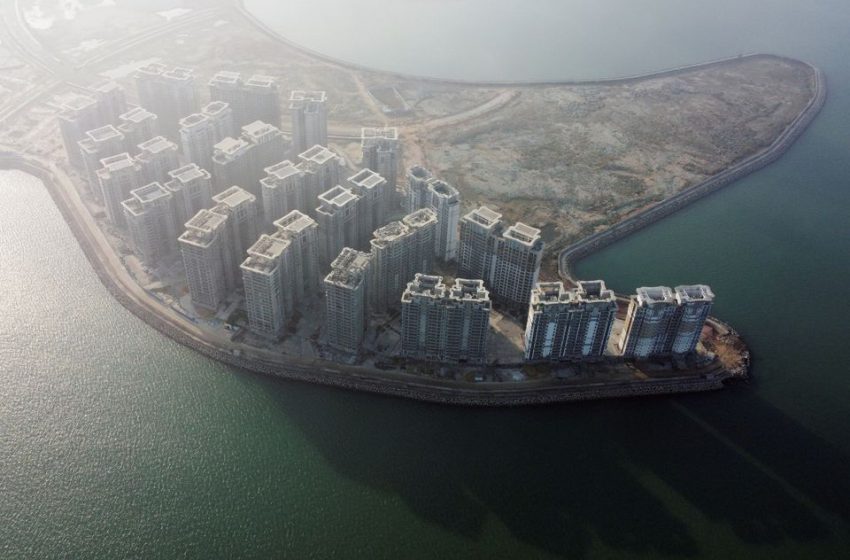 BEIJING/HONG KONG, March 22 (Reuters) – China Evergrande Group (3333.HK)plans to return land set aside for collateral for a trust loan from CITIC Trust Co to the Guangzhou government, two sources familiar with the matter said on Tuesday, in a workout arrangement that could be replicated in other parts of China’s indebted property sector.

The deal centres around a 3.25 billion yuan ($510.73 million) trust loan that CITIC Trust issued to Evergrande using funds raised from investors, according to the sources and a document reviewed by Reuters partially outlining the plan.

Under the loan resolution, CITIC will return the land used as collateral to Evergrande, the world’s most indebted property developer, who will then pass it on to the Guangzhou city government to put up for sale, the sources said.

State-owned Guangzhou City Construction Investment group will act as a guarantor of the loan and CITIC will repay the principal amount to its investors within two years using funds from the Guangzhou city government, the sources said.

The plan is still pending approval from the investors of the trust loan, one of the people said.

If successfully implemented, this model of local government and creditors working together to resolve Evergrande’s debt repayment issue could be replicated for other trust loans, analysts said, and more state-owned city investment companies may become involved in the firm’s debt restructuring process.

Evergrande, CITIC and Guangzhou City Construction Investment did not respond to requests for comment.

Trust companies, which pool money from wealthy investors, are an important source of funding for Evergrande and other property developers in China.

A wave of defaults in the property sector has rattled investors and while state intervention has quelled market concern over a disorderly collapse of China Evergrande, investors are still in the dark over whether they will recoup their money.

Evergrande, with over $300 billion in liabilities, defaulted on some overseas bond payments in December and has struggled to repay suppliers and creditors and complete projects and homes.

The firm set up a risk management committee in December made up mostly of members from state enterprises, as the Guangdong provincial government is leading the restructuring.

Evergrande said in a stock exchange filing on Tuesday it would not be able to publish financial results for 2021 by March 31 as required by stock listing rules because audit work has not been completed.

The firm said that due to the “drastic changes” in its operations since the second half of 2021 the auditor has added a large number of additional audit procedures.

Nomura said in a report the failure of companies to issue 2021 results on time will further weigh down sentiment in the property sector. Over the past few months the sector has been pummelled as investors have sold off shares and bonds on liquidity and financial health concerns.

Evergrande’s filing said it will publish the audited annual results “as soon as practicable” after the audit procedures have been completed, adding a trading suspension in its shares will remain in place until it publishes the latest results.

Evergrande Executive Director Siu Shawn, Non-Executive Director Liang Senlin and Chen Yong, a member of the company’s risk management committee, will hold a call with investors on Tuesday at 1300 GMT, according to an invitation reviewed by Reuters. The invitation did not specifically say what the call would cover.

Evergrande did not respond to a request for comment about the call.

In a separate filing on Tuesday, Evergrande said the Property Services Group had launched an investigation into how banks seized 13.4 billion yuan in deposits that had been pledged as security for third party guarantees.

The seizure of the funds, which the property services unit discovered when it was preparing its annual report, underscores the turmoil at Evergrande, which said it will hire King & Wood Mallesons as an additional legal advisor.

Reporting by Shuyan Wang and Jing Xu in Beijing, Clare Jim in Hong Kong and Jason Xue in Shanghai; Editing by Edwina Gibbs and Christian Schmollinger