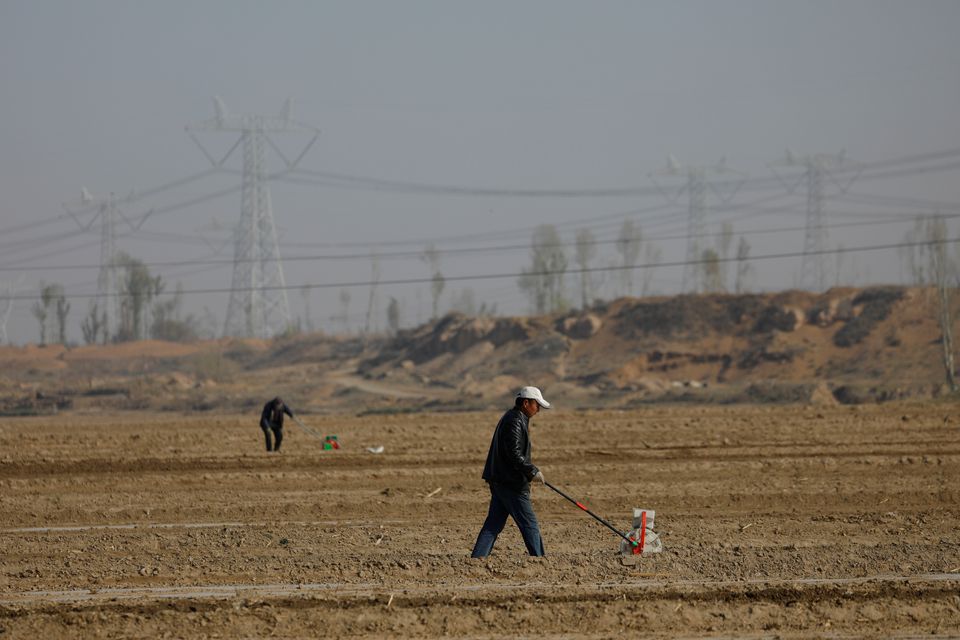 Workers use planters to plant corn seeds on the fields in a village on the outskirts of Wuwei, Gansu province, China, April 14, 2021. REUTERS/Carlos Garcia Rawlins

The long-anticipated commercialization of GM corn in the world’s No. 2 producer is set to significantly boost yields, reducing the need for imports. It may also spur hoped-for reform of a chaotic and oversupplied seed sector, industry experts say, creating a new multibillion dollar market that may eventually open up to global seed giants.

New regulations drafted last month lay out for the first time the steps needed in China for approval of corn varieties that integrate GM traits, paving the way for the market to open as early as next year.

Beijing has made clear it will champion home-grown leaders in seed technology, and Dabeinong is the larger of two local companies with an insect-resistant and herbicide-tolerant corn already approved as safe by the agriculture ministry.

“For the first two years, because we’re the first mover in the market, and we believe our technology is better, we’ll have two thirds of the share,” general manager Liu Shi told Reuters.

By the third year, even with more competition, it could generate around 1 billion yuan ($155 million) in royalties, he estimated. The company will rely on seed breeders using its traits to generate revenues.

The parent firm made headlines in the United States after a senior executive was among several people charged with stealing corn seed from fields in Iowa and Illinois. The executive, the brother-in-law of group founder Shao Genhuo, was jailed for three years in 2016.

Dabeinong strictly abides by the law and is trying to rebuild its image, said Liu, who joined the company earlier this year. He previously worked at Monsanto, now part of Germany’s Bayer (BAYGn.DE), in the 1990s when the GM pioneer was trying to get its first products accepted.

Dabeinong, with a staff of 160, hopes to emulate the success of the U.S. seed giant, but above all wants to help farmers, Liu said.

For now, Dabeinong’s corn traits use genes that were discovered and commercialised by other firms but are off-patent. The biotech firm is working on its own genes, although these are yet to be approved.

It may need to move quickly before its “me-too” products lose their value, said an executive at a multinational seed company who declined to be named.

It has licensing deals with almost 200 seed firms.

Early demand is likely to be strong.

China harvested 261 million tonnes of corn in 2020/21 from some 41 million hectares, largely to feed its huge herds of pigs and chickens. Each hectare, however, yielded only about 60% as much corn on average as in No. 1 producer, the United States.

But Dabeinong won’t be alone for long.

Though global seed giants like U.S.-based Corteva Inc (CTVA.N) and Bayer cannot enter China’s GM market, Syngenta, the world’s No. 3 seed producer owned by China’s Sinochem Holdings, expects to become market leader, according to the prospectus for its upcoming IPO.

Syngenta is a major player in GM grains, but as it was only bought in 2017 is still playing catchup in China in the drawn-out process to win biosafety certificates for its GM traits from regulators.

Meanwhile, the exact timing of GM corn is still uncertain.

Under the new rules, seed varieties that integrate GM traits must undergo a one-year production trial, and it is not clear if Beijing will accept data already gathered by Dabeinong.

“We have two plans, a more aggressive one for commercial seed production in 2022, and another for 2023,” said Liu. “We’re waiting for the government’s message.”