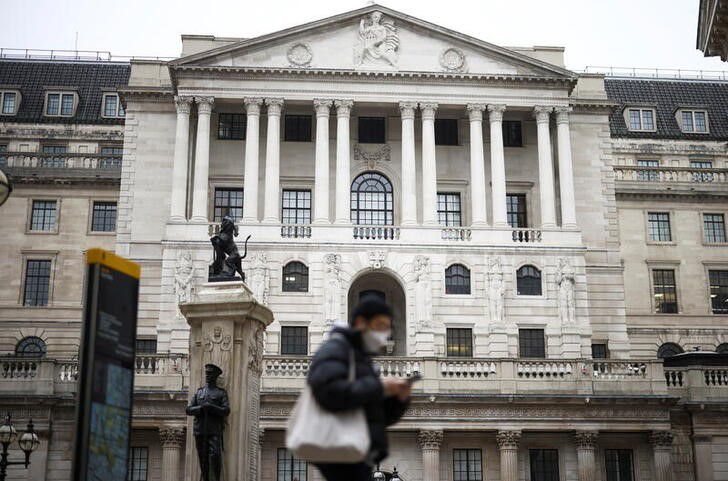 A person walks past the Bank of England in the City of London financial district in London, Britain, January 23, 2022. REUTERS/Henry Nicholls

LONDON, May 24 (Reuters) – Banks and insurers that fail to manage climate risks as a “first-order” issue could face a 10% to 15% hit to annual profits and higher capital requirements, the Bank of England (BoE) said on Tuesday.

In its first comprehensive stress test of how Britain’s financial system will cope with climate change and the shift to a net zero-carbon economy by 2050, the BoE said action now would lower future costs.

“The first key lesson from this exercise is that over time climate risks will become a persistent drag on banks’ and insurers’ profitability – particularly if they don’t manage them effectively,” said BoE Deputy Governor Sam Woods in a speech.

“While they vary across firms and scenarios, overall loss rates are equivalent to an average drag on annual profits of around 10-15%.”

The Bank of France was first among central banks to undertake a climate stress test of banks and insurers, but Fitch said the BoE test was the toughest by a central bank so far. The European Central Bank has planned a test for this year, while the U.S. Federal Reserve has not begun such an exercise.

Banks across the world face pressure from climate activists to cut financing to fossil fuel projects.

“Outright restrictions on lending to new fossil fuel projects must now be on the table,” said David Barmes, senior economist at Positive Money, which campaigns for a sustainable economy.

But Woods said banks and insurers would need to continue financing more carbon-intensive sectors of the economy to help them transition to a low carbon future.

“Cutting off finance to these corporates too quickly could prove counterproductive, and have wide-ranging macroeconomic and societal consequences, including through elevated energy prices – potentially akin to those whose negative effects we are experiencing today.”

HSBC, Lloyds, Aviva, NatWest and the Lloyd’s of London insurance market were among the group tested for early, late and no additional action to climate change over 30 years.

In the most severe scenario posed by the BoE, where no additional measures are taken to reduce the rise in global temperatures, banks and insurers tested could face total losses of 334 billion pounds ($417 billion) over three decades.

“To the extent that climate change makes the distribution of future shocks nastier, that could imply higher capital requirements, all else equal,” Woods said, adding a debate was to be had.

Properties at risk of flooding would become prohibitively expensive to insure under the severe scenario, the BoE said.

The BoE tested the ability of 19 banks and insurers to understand how climate change will affect their business models and if they hold enough capital to cover climate-related risks like catastrophes, or falls in the value of property and other assets on their books.

The bank had already said there would be no pass or fail mark due to the test’s experimental nature, and the results would not determine capital requirements for now.

The Bank of France said last year that French banks should speed up their response to climate change. read more