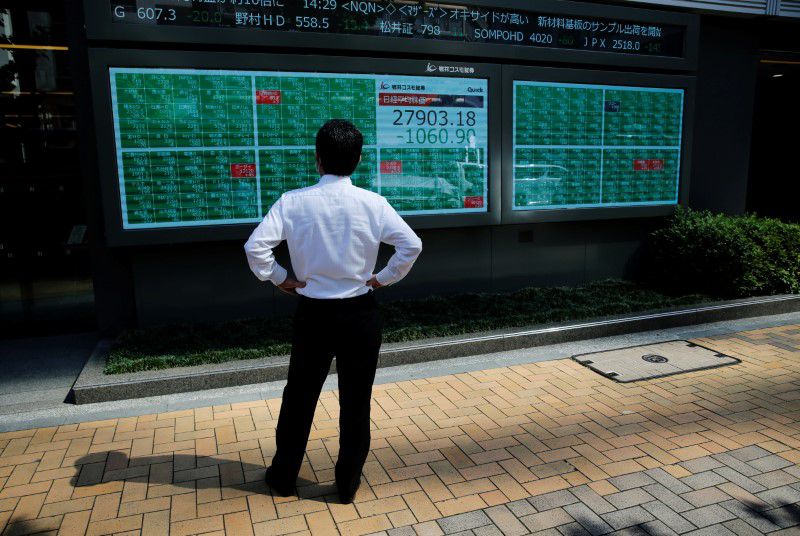 A man watches an electric board showing Nikkei index outside a brokerage at a business district in Tokyo, Japan, June 21, 2021. REUTERS/Kim Kyung-Hoon/File photo

SYDNEY/NEW YORK, Aug 10 (Reuters) – Asian stocks started off on a weak footing on Tuesday after a largely soft performance on Wall Street and as persistent concerns over the spread of the Delta variant of the coronavirus dented sentiment and triggered falls in metals and oil prices.

“With the Delta variant spreading, money managers who were over-invested in the re-opening trade continue to unwind that trade because it’s not working right now,” said Dennis Dick, a trader at Bright Trading LLC.

Oil prices were recovering on Tuesday after falling as much as 4% in the previous session, which extended last week’s steep losses amid a rising U.S. dollar and concerns that new coronavirus-related restrictions in China could slow a global revival in fuel demand. OR

Gold stabilised after falling to a more than four-month low on Monday as strong U.S. jobs data bolstered expectations for an early tapering of the Federal Reserve’s economic support measures. read more

“Having swum from a very inflation-better opinion this year to a very disinflation view up to a week or so again, so what we are we getting now again is another rotation into some of the reflation trades,” said Sean Darby, a Jefferies strategist in Hong Kong.

“The only thing that is different between now and the last 12 to 19 months is that it is likely to be accompanied by a stronger dollar.”

In the U.S., the Senate came closer to passing a $1 trillion infrastructure package, though it still has to go through the House. read more

Investors were still assessing whether Friday’s strong U.S. payrolls report would take the Fed a step nearer to winding back its stimulus.

“What we’re seeing is a little bit of early profit-taking on the back of fear that tapering will come in earlier in September,” said Sebastien Galy, senior macro strategist at Nordea Asset Management. “But as you can see, it has little impact because the effect of a better economy far outweighs the substitution effect of higher interest rates.”

However, the pace of tapering was still up in the air and would decide when an actual rate increase comes, he said. The Fed is currently buying $120 billion of assets a month.

The spread of the Delta variant could argue for a longer taper.

On the plus side, stocks have been mostly underpinned by a robust U.S. earnings season. BofA analysts noted S&P 500 companies were tracking a 15% beat on second-quarter earnings with 90% having reported.

The dollar held firm against the yen at 110.38 yen , near its highest level in about two weeks.

The U.S. currency’s broad rally came as U.S. Treasury yields spiked to three-week highs on the back of the strong jobs data and early Fed taper speculation.Reporting by Paulina Duran in Sydney and Matt Scuffham in New York; Editing by Shri Navaratnam