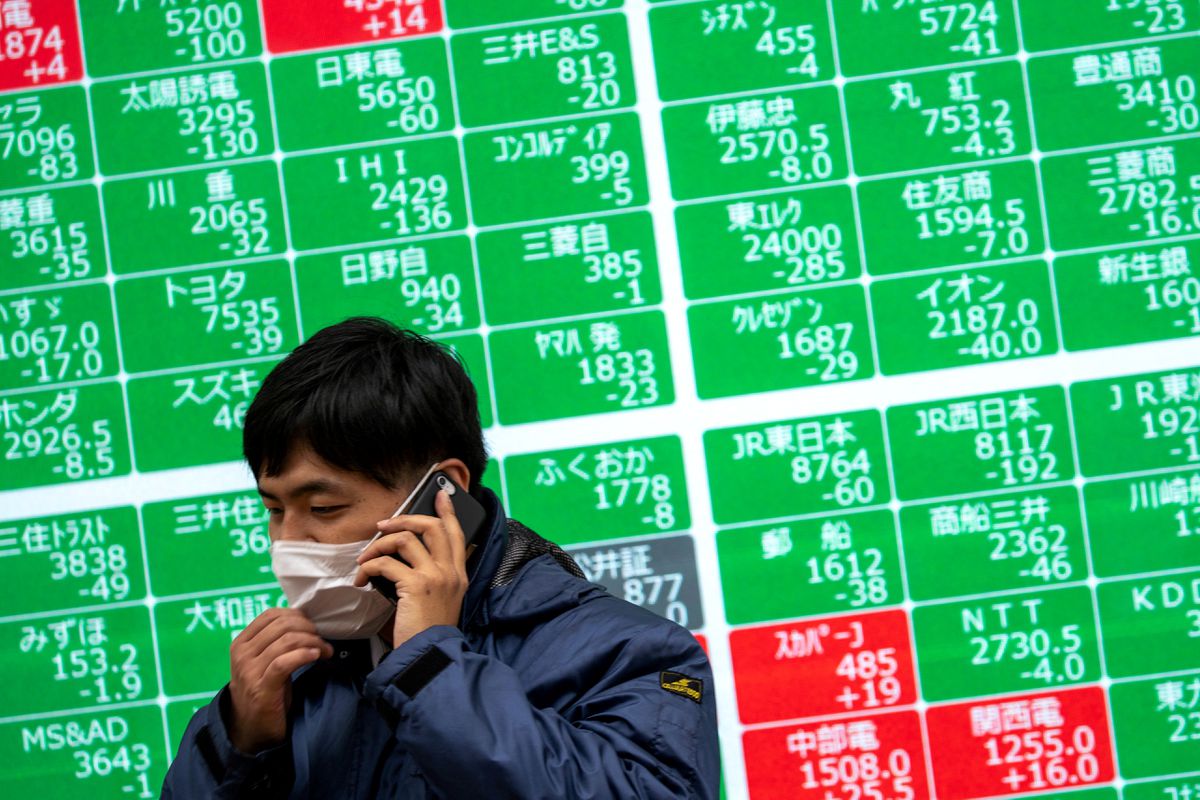 A man wearing a protective face mask, following an outbreak of the coronavirus, talks on his mobile phone in front of a screen showing the Nikkei index outside a brokerage in Tokyo, Japan, February 26, 2020. REUTERS/Athit Perawongmetha/File Photo

Also weighing on share markets were remarks from Fed Chair Jerome Powell reiterating that he and fellow policymakers will consider a faster wind-down to the Fed’s bond-buying programme, a move widely seen as opening the door to earlier interest rates hikes.

This helped support the dollar which, despite the cautious mood gained ground on the yen, typically seen as an even safer haven than the greenback.

However, Japan’s Nikkei (.N225) lost 0.6%, and all three main Wall Street benchmarks fell more than 1% overnight as a global rally petered out as news about the Omicron variant of the coronavirus turned negative.

Omicron is rapidly becoming the dominant variant of the coronavirus in South Africa less than four weeks after it was first detected there, and on Wednesday the United States became the latest country to identify an Omicron case within its borders. read more

“All that anyone can do at the moment is wait for each headline as it breaks, as there are a series of outstanding questions about the new variant that remain largely unanswered and will remain unanswered for days or weeks,” said Kyle Rodda an analyst at Melbourne brokerage IG markets.

He added that with the Federal Reserve reducing its stimulus and building up to raising rates, “this is the first time in a really long time when markets haven’t taken a bad development as another excuse to buy stocks expecting an increase in liquidity from the Fed”.

Yields at the short end of the curve were steadier on chances that the U.S. Federal Reserve will speed up its bond purchase tapering.

On Wednesday, in his second day of testimony to Congress, Powell said the Fed needs to be ready to respond to the possibility that inflation may not recede in the second half of next year as most forecasters currently expect. read more

This would likely lead to an acceleration in the pace oat which the Fed tapers its asset purchase programme.

“We now expect the (Fed’s policy committee) to finish asset purchases in April 2022 and start hiking the Funds rate in June 2022,” said analysts at CBA in a morning note.

The dollar index was steady, though the greenback rose around 0.25% to 113 yen regaining a little of its recent losses, thanks to the hawkish tone.

The risk sensitive Australian dollar languished at $0.7114 not far from Tuesday’s low of $0.7063, its weakest since early November of last year.

Oil prices also rebounded, albeit after a strong sell off in recent days based on fears the new variant will hit travel.