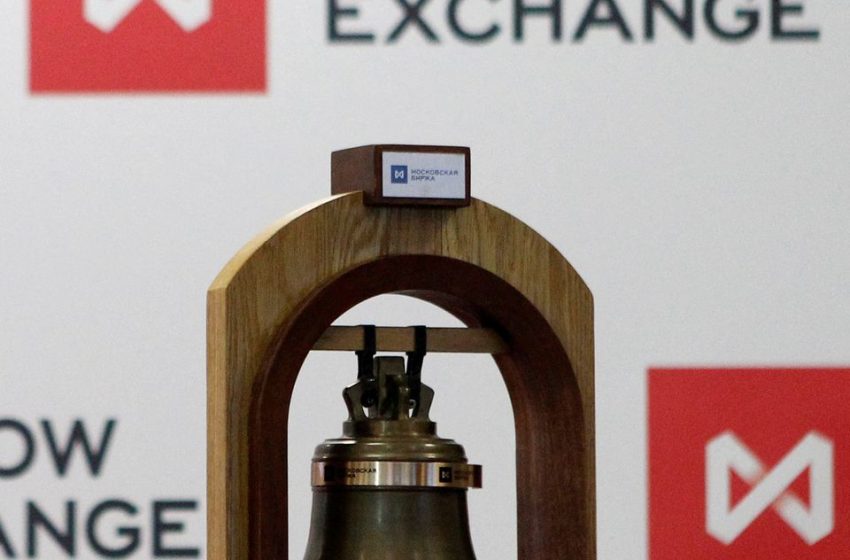 The bell rung at the beginning of trading sessions is seen in front of the logo of the Moscow Exchange after the start of trading in Moscow February 15, 2013. REUTERS/Maxim Shemetov

NEW YORK/LONDON, Oct 13 (Reuters) – Global investors and banks have been voicing confusion about their efforts to convert depositary receipts of Russian companies into ordinary shares in compliance with a new Russian law, according to advisors and client communications from the banks.

Some banks including Citigroup and BNY Mellon have had to temporarily halt these processes, after Moscow made a drive to ensure Russian firms axe their depositary receipt programs. The intent of the law was to reduce the influence of foreign banks on Russian companies after Moscow’s invasion of Ukraine.

Many international investors who have tried to convert their Russian assets have been unable to do so, the advisors said.

“This is complete chaos now,” said Grigory Marinichev, a partner at law firm Morgan Lewis, which is advising roughly 300 investors and brokerages. “Nobody understands what is happening and what will happen next.”

JPMorgan & Chase, Citigroup, Deutsche Bank and BNY Mellon act as depositary banks for most Russian depositary receipt programs, according to Clearstream. Depositary receipts are certificates issued by a bank representing shares in a foreign company traded on a local stock exchange.

In statements to clients, some banks cited difficulties verifying there are enough shares to execute cancellations of depositary receipts.

“BNY Mellon has closed its books for cancellations with respect to the Novatek DR program until a complete reconciliation of its books,” BNY told clients in a Sept. 2 statement. On Sept. 27, BNY started accepting cancellations again, but said it could close it again at any moment due to reconciliation issues. The bank declined further comment.

Citi, after closing books “to ensure a complete and accurate reconciliation”, reopened them last week. But the bank said in a statement to clients dated Oct. 5 seen by Reuters it may face reconciliation issues due to cancellations taking place directly in Russia.

BlackRock has been working to convert its depositary receipts, parking the underlying securities in a structure with a view to returning sales proceeds or income when sanctions permit and when market conditions allow some recovery in their value, a source close to the matter told Reuters. Reuters has been unable to verify whether BlackRock encountered any reconciliation problems.

One of the biggest U.S. pension funds separately told Reuters it did not see a clear solution for the securities as different rules in the United States and in Russia bar a divestment. The fund declined to be named because its investment strategies are private.

Moscow has imposed a Nov. 10 deadline for so-called forced conversion of shares.

In practical terms, this means some investors may end up taking possession of the underlying shares without formally cancelling the depositary receipts linked to those shares. While depositary receipts are under custody of global banks, the shares they represent are parked in Russia.

This has created headaches for the banks who effectively acted as guardians of the programs. They were struggling to match or “reconcile” the depository receipts on their books with the underlying shares now in Russian banks.

To avoid such issues, global banks decided to stop accepting cancellation requests. For awhile, this left investors only with the option of cancelling the depositary receipts directly in Russia, advisors said.

“Banks may end up having more people requesting a redemption than shares they have to deliver. This would create a legal liability,” said Marc Zboch, an investment professional who launched the website “Russia Deadline” to help investors convert their receipts for a fee.

Foreign investors who want to convert their depositary receipts into local shares using the forced conversion must also jump through some hoops, supplying documents supporting their ownership which must be translated into Russian and notarized. Investors must present these in person in Russia either themselves or using a legal representative, according to advisors.

Investors are meanwhile discussing ways online to meet the Russian requirements and how to pay fees to Russian banks. Some investors are active in online discussion groups like the RU GDR/ADR Community on the Discord platform as they try to navigate the situation. They also complain their global brokers have not cooperated processing their requests or providing the required documents.

“Investors are sandwiched between a rock and a hard place,” said Marinichev.

Reporting by Carolina Mandl in New York and Sinead Cruise in London; editing by Megan Davies and David Gregorio