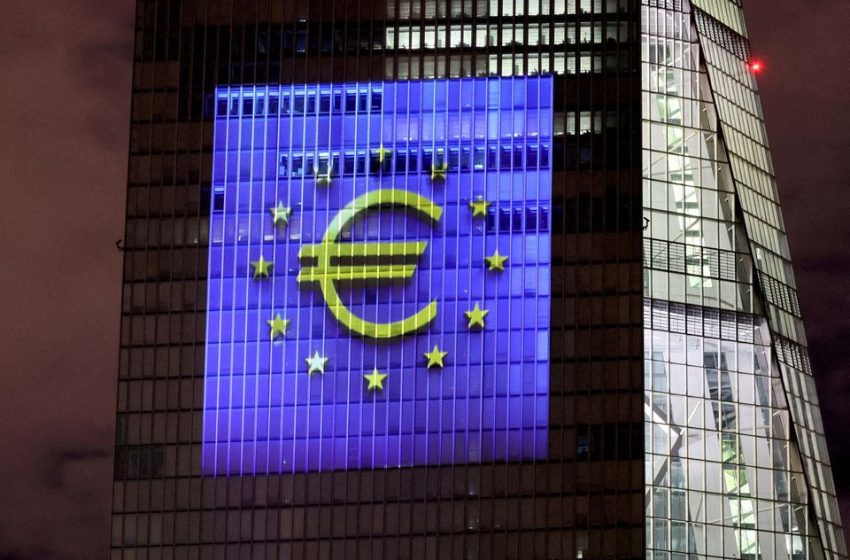 A symphony of light consisting of bars, lines and circles in blue and yellow, the colours of the European Union, illuminates the south facade of the European Central Bank (ECB) headquarters in Frankfurt, Germany, December 30, 2021. REUTERS/Wolfgang Rattay/File Photo

LONDON, June 16 (Reuters) – A markets sell-off has brought back memories of the euro zone debt crisis more than a decade ago, highlighting divisions that have plagued the currency bloc’s efforts to forge a closer bond.

While the years since the debt crisis have seen the 19 countries in Europe’s euro area centralise and toughen bank controls, many planned economic reforms in Italy and elsewhere were watered down as vast money printing buoyed the economy.

Spurred by fears higher borrowing costs will choke economic growth, the markets rout has exposed cracks in the uneasy alliance which – unlike the United States – is held together largely by the central bank rather than a government with power to tax and spend.

Two events this week expose the fragility of the union: the ECB’s efforts to restore confidence in weaker states facing surging borrowing costs as its debt-buying programme ends, and ministers’ decade-long failure to put the bloc’s savers on a solid footing.

After a rare emergency meeting on Wednesday, the ECB promised fresh measures to temper the market selloff but the lack of a concrete plan to help debt-laden countries like Italy and Greece disappointed some. read more

This was in sharp contrast to 2012, when then ECB president Mario Draghi tackled a crisis of confidence in the currency’s future with a pledge to do “whatever it takes”, followed by a vast programme of money printing.

Now, however, rocketing prices, triggered by that money printing, as well as soaring energy costs in the wake of Russia’s invasion of Ukraine and pandemic lockdowns in China, makes this feat difficult to repeat.

“It was easy to do whatever it takes when inflation was low,” said Guntram Wolff of think-tank Bruegel, adding that rising prices would push the ECB to reverse course.

“The emergency meeting created a lot of expectations that the ECB cannot ultimately meet,” he said. “Only governments can address the real economic divergence and incomplete set up of the euro zone.”

French Finance Minister Bruno Le Maire cautioned against a fragmentation of the bloc, the type of public warning once common but that largely disappeared since vast money printing eased the debt crisis.

Speaking to students in London, Lagarde gave no further clues as to how ECB action could look, talking instead about climate change and the impact of war on global grain supplies.

The divisions in the euro zone are likely to come to the fore at a ministers’ meeting later on Thursday to discuss a deadlocked plan to reinforce the bloc’s financial system.

A central pillar of financial crisis reform, the so-called banking union remains mired in debate, with the critical question of region-wide protection of deposits still unresolved.

“We have gone backwards rather than forwards,” said Karel Lannoo of the Centre for European Policy Studies.

“If there is a bank failure, it will be the same as 2008,” he said, adding that individual states rather than the wider bloc would be left to shoulder the burden. “The Draghi period is over.”

The ministers are expected to further delay plans for the single safety net for the bank deposits, long opposed by Germany which did not want to be on the hook for problems elsewhere, prolonging the decade-long push to unify the sector to better withstand crises. read more

Thomas Huertas, a former alternate chair of the EU’s banking watchdog and now at the Leibniz Institute, said the absence of such a safety net put European banks at a disadvantage to American rivals.

“It is one of those benefits that the person can see and recognise. It’s an important element not only for finance, but I think also of the Union itself,” he added, commenting on the need for cross-border saver protection.

That lack of progress with a banking union, in turn, has weighed on the stocks of Europe’s banks, which have been trailing their U.S. rivals for years.

The ministers’ debate takes place against the backdrop of a rise in Italy’s borrowing costs, exacerbated by the ECB’s plans to raise interest rates and wind down its debt-buying to temper rising prices. Spanish, Portuguese and Greek bonds are under similar pressure.

How Europe responds is being closely watched by bankers and investors.

“So much of what we do is a confidence game,” said Vis Raghavan, CEO of EMEA and Co-Head of Global Investment Banking at JPMorgan. “A lot of what we are seeing is about confidence in policy and achieving an orderly route out of stagflation.”

But with the ECB running out of road to keep investors happy, the ball is back in the court of politicians to act.

“While the ECB could keep markets happy with a bazooka, it’s getting harder to do this in a time when it has to fight inflation,” said Carsten Brzeski, an economist with Dutch bank ING.

“That leaves it up to the governments to finally get their act together in finding a proper union.”

Writing By John O’Donnell; additional reporting by Leigh Thomas in Paris and Sinead Cruise in London; editing by Emelia Sithole-Matarise