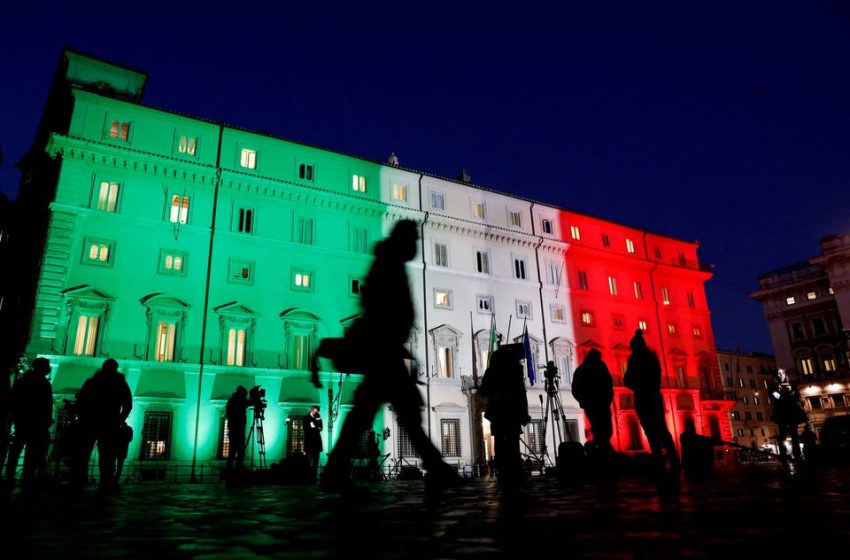 MILAN, June 20 (Reuters) – A plunge in shares in Italian banks, sparked by rising government bond yields, has reawakened memories of the 2011-12 debt crisis and rekindled concerns over lenders’ vulnerability to sovereign risks.

The sovereign-bank link, which became a “doom loop” of mutually reinforcing risks a decade ago, compounds problems for Italian lenders (.FTITLMS3010), which are down by a fifth this year, nearly twice the loss of the wider European sector (.SX7P), hit by the fallout from the Ukraine crisis.

Many analysts and bankers, including UniCredit’s (CRDI.MI) boss Andrea Orcel, stress that the situation has changed and blame the drop in shares on an unwarranted knee-jerk investor reaction.

“It’s a question of déjà vu,” Orcel told a conference in Milan last week. “It’s a difficult situation but it’s not the same.”

Italian banks became a proxy for sovereign risks when Rome’s debt costs threatened to spiral out of control, before the ECB, led by Italy’s current Prime Minister Mario Draghi, pledged to save the euro in 2012 and proceeded to mop up a fifth of Italian bonds.

A decade later progress on a Europe-wide banking union has stalled and Italian banks are still halfway through a consolidation process to bolster mid-sized players and fix the perennial headache of Monte dei Paschi di Siena (BMPS.MI).

The ECB’s latest promise to devise a new anti-spread tool last week halted the rout in Rome’s bonds and banking shares, but investors wonder whether this respite is temporary.

Speaking at the Milan conference, Carlo Messina, CEO of Italy’s biggest bank Intesa Sanpaolo (ISP.MI), said a wealthy state such as Italy should not rely on the ECB to sustain its debt, and think its “problems will be solved from the outside.”

“There are definitely differences compared with the past, but I see also elements that worry me,” said Ignazio Angeloni, a research fellow at the Harvard Kennedy School.

“I believe the restructuring of Italy’s banking system to be incomplete,” added Angeloni, who previously sat on the ECB’s supervisory board and led the central bank’s financial stability department.

“The top two lenders are safe at any speed, so to speak, but there are four or five mid-sized banks which haven’t gone the full length of the journey.”

When bond prices drop, banks suffer a direct hit to capital reserves and see the cost of their debt and equity financing rise.

Nudged by regulators to diversify sovereign risks, Intesa and UniCredit have cut domestic bond holdings to 70%-80% as a proportion of their core capital.

When including also smaller peers, that ratio rises to 148% for Italy’s top five banks, according to JPMorgan, though that is still a far cry from the 261% level of 2017.

As a share of total assets, domestic bonds at Italy’s main listed banks have fallen to 6.6%, Citi said, from past levels of more than 10%, a threshold which still applies to the wider banking system.

To insulate themselves from market swings, Italian banks have booked 72% of their domestic bond portfolio among assets held to maturity which don’t require ‘mark to market’, according to the Bank of Italy.

As a result, a 100 basis point widening in the yield spread between 10-year Italian and German bonds is estimated to cost banks 20-25 basis points in terms of aggregate core capital – which is well above minimum thresholds.

The Bank of Italy calculates that Italian banks held excess capital equivalent to almost 4% of their risk weighted assets at end-2021, having boosted their reserves in the last few years.

The ECB, which became the euro zone’s banking supervisor in late 2014, has also strongarmed Italian banks to cut gross bad debts to 4% of total lending from a 2015 peak of 18%.

Investors are worried that problem loans could rise again as businesses face higher lending costs, record prices for energy and raw materials as well as disrupted supply chains and the phasing out of COVID support measures.

“Italian banks have changed their approach to lending over the past decade. Personal relations used to play a key role, it’s no longer like that, banks pay enormous attention to credit risks,” he said.

“None of the COVID-related loan loss provisions banks set aside in the first half of 2020 have been used to actually write down loans,” he added.

Angeloni, however, cautioned it was too early to assess the extent of the damage wrought by COVID.

“It seems things aren’t that bad, but we don’t know for sure,” he said.

Italian businesses have only have only just begun repaying capital on state-guaranteed COVID loans. read more

“The problem is that Italy has no fiscal room for manoeuvre,” Angeloni said, adding that Rome failed to take advantage of low rates in good time to reduce the debt.

“I would not say the doom loop of bank-sovereign risks is behind us.”