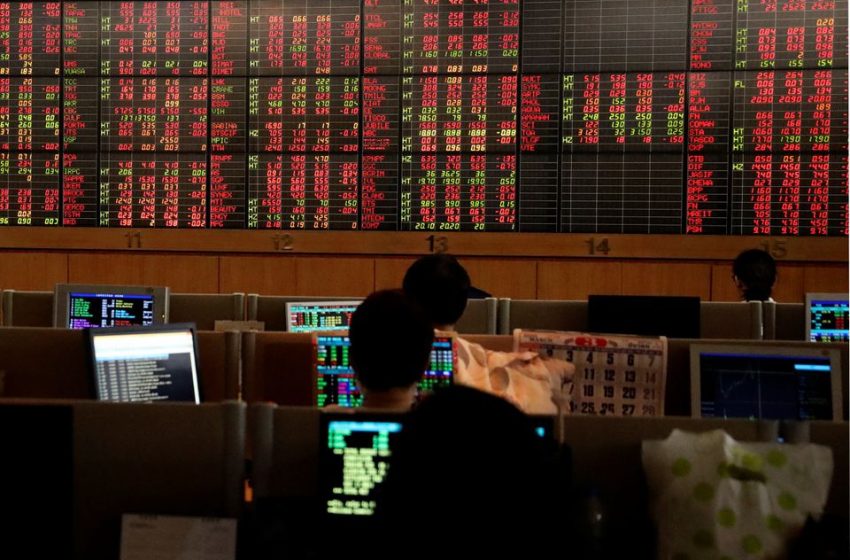 Traders are seen in front of a screen with trading figures in red at Thailand Stock Exchange building in Bangkok, Thailand March 13, 2020. REUTERS/Juarawee Kittisilpa

Analysis: Investors say Asia a safe place as Fed hikes but premature to jump in

SINGAPORE/HONG KONG, June 16 (Reuters) – Asia’s emerging economies are better placed than most other regions to weather a bout of turbo-charged U.S. policy tightening, analysts say, but with a health warning that investors shouldn’t rush in.

The Federal Reserve raised interest rates by 75 basis points on Wednesday, the largest hike in more than a quarter century, and flagged further steep increases for the rest of the year to curb surging inflation. read more

Expectations of aggressive U.S. tightening had already caused a violent selloff in global stock, bond and even cryptocurrency markets, though Asian currencies and stocks rallied on Thursday.

Foreign investors have pulled money out of emerging Asia, excluding China, for five straight months, worried about inflation and a reluctance in the region to raise rates in the face of slowing global growth.

Now Asia is under pressure to tighten.

Galvin Chia, an emerging markets strategist at NatWest Markets, cautions against reading too much into Thursday’s rally, warning the next few weeks could be volatile.

“There’s still a little bit of room for wiggle about what the Fed will do next,” he said. “I would say investors wouldn’t be jumping on with any sort of bigger, longer-term investment decisions at this point in time. It’s still going to be a little bit choppy.”

Local markets have sold off this year, though the moves have been far gentler than the violent capital outflows seen in U.S. tightening cycles in 2016 and 2004.

“But we’re still very cautious and neutral in terms of asset allocations, we’re not saying, ‘Run out and by these things now’,” Craig said.

“We’re just saying that they are becoming more appealing, with thinking about where to find growth in portfolios,” and investors can wait to see what happens to growth and inflation.

The authorities in the communist economy have eased regulatory crackdowns and COVID-19 lockdowns this month, but questions remain about how fast the economy will recover.

Economists say the People’s Bank of China (PBOC) now has only limited room to ease, given the aggressive Fed and Beijing’s wariness of debt bubbles.

Divergent Sino-U.S. policies have wiped out China’s yield advantage, triggering a record monthly tumble in the yuan in April as capital left. The Chinese currency has since stabilised.

Investors pulled $4.9 billion out of emerging markets last month, extending a third month of outflows, according to the Institute of International Finance.

Foreigners reversed in the last week of May and bought Chinese equities, even as they reduced holdings of Chinese bonds for a fourth month.

“The word with China is stability and control,” Craig said. “They want to see there’s a lot more control and stability being factored in, in terms of currency, bond and equity markets while they focus on the economy.”

Underscoring this caution, China’s cabinet said on Wednesday it will act decisively in ramping up support for the economy, but such efforts should not lead to excessive money issuance and an “overdraft of the future”.

How other Asia central banks react to their domestic inflationary stresses is key. NatWest’s Chia points to a selloff in Indonesian bonds this month as evidence investors want to see the dovish central bank change its stance.

An aggressive Fed will put pressure on Asia to “raise rates, partially because of increased risk of capital outflows and weaker currencies,” said Rob Subbaraman, head of global macro research at Nomura.

“But also I think many of the Asian economies are now facing their own inflation pressures irrespective of the Fed.”

Subbaraman has changed his view on the Bank of Thailand staying on hold, now forecasting it will raise rates at the next two meetings. He also expects “aggressive” rate hikes in India in the second half.

Reporting by Rae Wee in Singapore and Alun John in Hong Kong; Additional reporting by Winni Zhou and Samuel Shen in Shanghai; Editing by Vidya Ranganathan and William Mallard