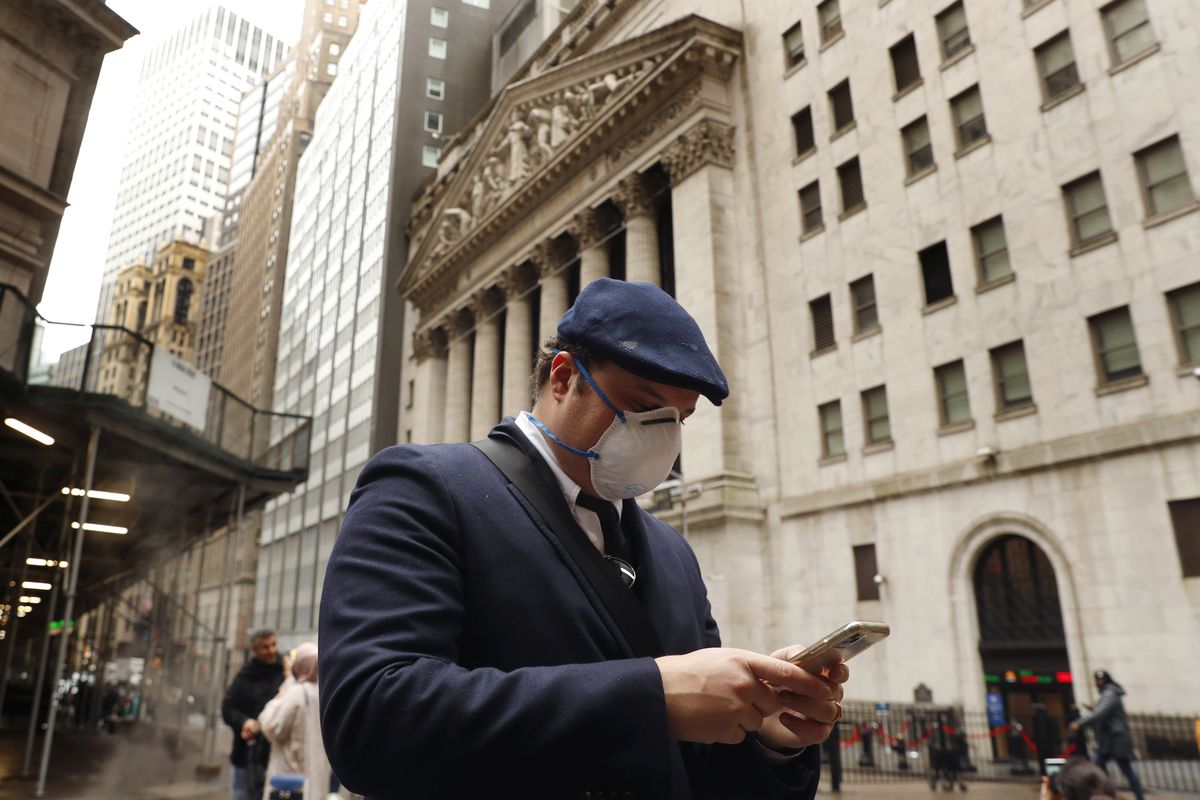 A man wears a protective mask as he walks past the New York Stock Exchange on the corner of Wall and Broad streets during the coronavirus outbreak in New York City, New York, U.S., March 13, 2020. REUTERS/Lucas Jackson/File Photo

Dec 1 (Reuters) – A pileup of risks into year-end has some investors gauging whether December will continue its historical trend of a strong stock performance, even as markets face of worries over the Omicron coronavirus variant and a more hawkish Federal Reserve.

November and December have been the S&P 500’s second- and third-best months of the year since 1950, with the index rising an average of 1.7% and 1.5%, respectively, according to the Stock Trader’s Almanac.

This year, November’s gains were derailed in its final days, as concerns over how the new COVID-19 variant may impact global growth and Tuesday’s hawkish shift by the Fed in the face of surging inflation left the index with a 0.8% loss for the month. The S&P 500 is up 21.6% so far this year and remains near record highs. read more

While those risks are unlikely to dissipate anytime soon, stocks may still finish the year on a strong note, if historical performance is any guide.

The S&P has notched a positive return in December 74% of the time since 1928, more than in any other month, according to data from Bespoke Investment Group.

A weaker November has only bolstered that trend, if performance over the rest of the year has been robust: This year marks the 10th time the S&P 500 was down in November but up more than 10% for the year, the firm’s data showed. In the nine prior years when this occurred, stocks finished December with a gain, according to Bespoke.

“Momentum is definitely a factor,” George Pearkes, macro strategist at Bespoke, told Reuters. “If stocks are going up all year and people are underweight and chasing they may want to add to their positions before year-end.”

December’s gains tend to be even more positive when the S&P 500 has a strong first 11 months of the year, according to Ryan Detrick, chief market strategist at LPL Financial.

Since 1950, the index has gained an average of 1.7% in December when the S&P 500 has climbed at least 20% in the rest of the year, compared with an average of 1.5% for December overall, according to Detrick.

Markets may have their work cut out for them this time around.

The Cboe Volatility Index, known as Wall Street’s fear gauge, on Tuesday rose to levels seen during last week’s Omicron-fueled selloff after Fed Chairman Jerome Powell told Congress the central bank will likely discuss speeding up its taper of monthly bond purchases at its upcoming policy meeting in the face of surging inflation. Stocks tumbled on the news, while yields on Treasury bonds rose. read more

“With potential changes in policy on the horizon, market participants should expect additional market volatility in this uncharted territory,” said Charlie Ripley, senior investment strategist for Allianz Investment Management, in a recent note.

Expectations of a more hawkish Fed are likely to be an unwelcome development for the technology stocks whose outsize weighting in the S&P 500 helped send the index to record highs this year.

Rising yields on Treasury bonds–which often follow expectations of more aggressive Fed policy — dull the allure of equities for some investors and can weigh even more on stocks with lofty valuations, as they threaten to erode the value of their longer-term cash flows.

The S&P 500 information technology sector is trading at 27.5 times forward 12-month earnings estimates compared with its historic average of 20.8 times, according to Refinitiv Datastream.

Investors are also attempting to gauge the potential seriousness and severity of the Omicron variant, with Goldman Sachs mapping out four scenarios of how the strain may spread and its potential impact on global growth.

A ”downside” scenario, in which a large wave of infections leads to lockdowns, could slow global growth to 2% in the first quarter of 2022, the bank said, 2.5 percentage points below its current forecast.

Many investors, however, believe stocks will remain buoyant.

“The market has been looking for an excuse to sell off for quite some time,” said Jack Janasiewicz, lead portfolio strategist at Natixis Investment Managers Solutions. ”Yet strong corporate earnings and the likelihood of an expanding economy should keep the stock market from falling significantly from here.”