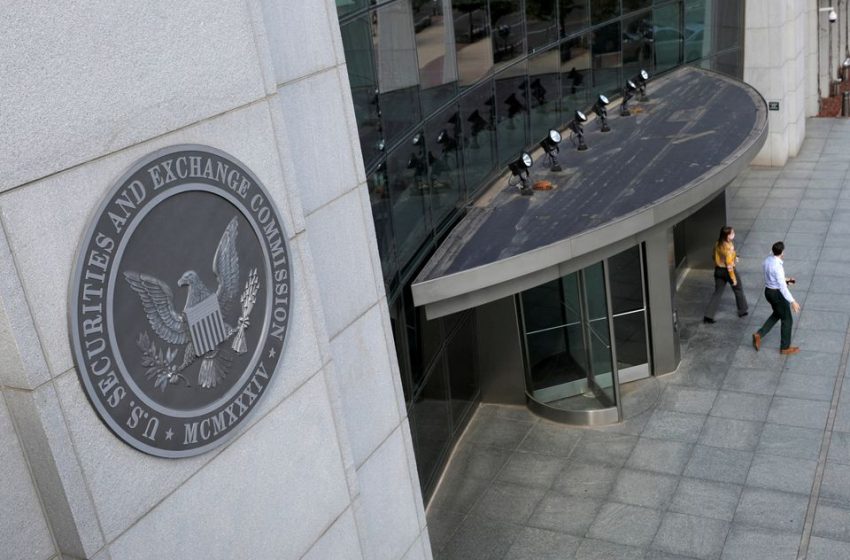 People exit the headquarters of the U.S. Securities and Exchange Commission (SEC) in Washington, D.C., U.S., May 12, 2021. REUTERS/Andrew Kelly

WASHINGTON/BOSTON, June 22 (Reuters) – Business associations for top U.S.-listed companies have pushed back against a landmark proposal by the Securities and Exchange Commission (SEC) to make corporate America disclose a range of greenhouse gas emission figures.

Groups including the U.S. Chamber of Commerce, the Bank Policy Institute, the National Association of Manufacturers (NAM) and the American Petroleum Institute (API) asked the Wall Street regulator for more discretion in the details they provide to investors, according to public correspondence sent to the agency.

The scale of the pushback highlights the pressure the SEC faces to dial back at least some of its climate agenda, though the extent to which companies may be successful in winning concessions remains to be seen. The regulator has also seen a show of suport in favor of the rules. read more

The letters, dated this month, came in response to a draft rule the SEC unveiled in March that would require public companies to spell out their own direct and indirect greenhouse gas emissions, known as “Scope 1” and “Scope 2 emissions.” read more

The measure would also require that companies disclose emissions generated by suppliers and customers, known as “Scope 3” emissions, if they are material or included in any emissions targets the company has set.

This aspect of the rule has attracted some of the strongest resistance, including from a top investor group.

The proposed rules “are vast and unprecedented in their scope, complexity, rigidity and prescriptive particularity,” wrote the Chamber of Commerce, the most powerful U.S. trade group. Among other things, it suggested Scope 3 reporting should be voluntary.

Comments on the proposal were due on Friday and will inform the SEC’s final rulemaking, which some analysts expect by the end of the year. Many companies now make ESG – environmental, social and governance – disclosures under voluntary standards, and with eyes on developments in the European Union, where officials aim to cut net planet-warming emissions by 55% by 2030 from 1990 levels. read more

U.S. President Joe Biden has said he wants to cut U.S. greenhouse gas emissions in half by 2030 and reach net-zero emissions by 2050.

SEC chair Gary Gensler has said the agency was responding to demands for consistent information from investors, who have poured some $7.5 billion into U.S. sustainable funds so far this year. read more

The SEC’s rule could face legal challenges on the grounds that its benefits do not outweigh the significant reporting costs, or that it exceeds the SEC’s authority, according to a comment letter from George Mason University law professor J.W. Verret.

To be sure, the agency has received much support too, including from Democratic U.S. Senators and from the California Public Employees’ Retirement System, the largest U.S. pension fund. It praised aspects of the proposal, including its call for companies to provide details about potential emissions reduction targets.

Some of the most pointed criticism came from U.S. Republican politicians, echoing other critics of ESG investing who say that efforts to address environmental and other social issues are best left to elected leaders, not businesses. read more

West Virginia Attorney General Patrick Morrisey, along with 23 other state officials, for example, called the SEC’s proposed rule “an ill-advised misadventure into environmental regulation” that is legally indefensible, and should be suspended.

Republican senators also pushed back against the SEC’s proposal arguing that the measure would impose enormous costs on the U.S. economy.

Top business groups did not go as far as calling for the rule to be scrapped, proposing instead changes to narrow its scope.

Such changes “would significantly ease compliance burdens and reduce investor confusion while still preserving the spirit of the proposed rule,” it wrote.

While the API said it could not support the current proposal, it does support “timely and accurate reporting of GHG (greenhouse gas) emissions.”

Investors have broadly supported the push for new climate-disclosures as a way to clarify the current mix of company statements that can vary widely in detail and approach. read more

But data gaps and methodology disagreements mean the SEC should back off its Scope 3 proposal, the ICI wrote.

“The SEC’s proposal should strike a better balance between ensuring investors get the information they need, without inundating them with inconsequential information,” ICI CEO Eric Pan told Reuters.

Reporting by Katanga Johnson in Washington and Ross Kerber in Boston; editing by Simon Jessop, Michelle Price and Deepa Babington