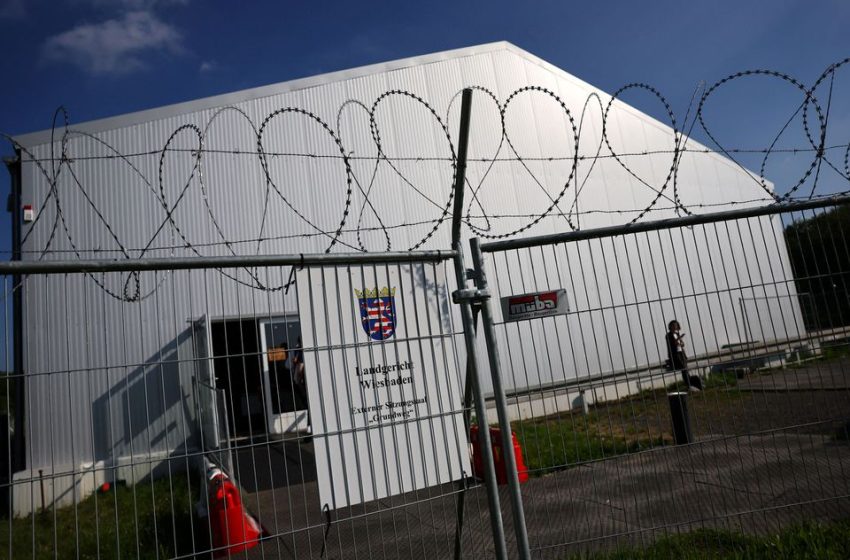 A general view shows the courtroom prior to the start of the 'Cum-Ex' tax fraud trial against German lawyer and tax specialist Hanno Berger at a regional federal state court in Wiesbaden, Germany, June 2, 2022. REUTERS/Kai Pfaffenbach/File Photo

FRANKFURT, Aug 17 (Reuters) – German chancellor Olaf Scholz faces lawmakers’ questions this week over his role in tackling a multibillion-euro tax fraud as a sprawling probe into the scheme threatens to undermine him as he grapples with an energy crisis and the fallout of war.

In the scheme, known as “cum-ex” or dividend stripping, banks and investors would swiftly trade shares of companies around their dividend payout day, blurring stock ownership and allowing multiple parties to falsely reclaim tax rebates on dividends.

The loophole, now closed, has snowballed into a political scandal, reignited by recent headlines that prosecutors probing the scheme in Hamburg, where Scholz was previously mayor, discovered 200,000 euros of cash in the safe of a local politician.

The probe has long taken on vast dimensions. Government officials say it involves some 100 banks on four continents and at least 1,000 suspects. It is dragging in Scholz at a time when his fractious governing coalition struggles with growing public discontent over rocketing energy costs in the wake of Russia’s invasion of Ukraine.

On Friday, Scholz is due to face local lawmakers in Hamburg who are investigating why, when Scholz was mayor, it took a finance ministry intervention for local authorities to move and demand repayment of millions of euros gained under the scheme by Warburg, an important local bank.

Scholz has dismissed suggestions of political intervention on the bank’s behalf, but local lawmakers say the issue has not yet been put to rest.

“The suspicion of political influence must be cleared,” said Goetz Wiese, a Christian Democrat politician who will question Scholz. “Scholz has to put all the facts on the table.”.

During the 2021 election campaign Scholz came under pressure over a fraud at Wirecard, which since collapsed. That did not derail his bid to become chancellor, but Fabio De Masi, a former member of the German parliament who probed this and the Wirecard scandal, said this time, it could be different.

“This affair has a lot of potential to endanger Scholz,” De Masi said.

“The political environment is different now with increasing gas prices.”

Some 48% of those asked in a survey by Germany’s Welt TV said the cum-ex scandal would “permanently damage” Scholz.

The chancellor already faced Hamburg lawmakers last year and acknowledged then having a series of meetings with the then chairman of Warburg and while he said he couldn’t recall details he denied using his influence as mayor to delay the repayment of the funds.

“This has been an issue for two and a half years now,” Scholz recently told reporters. “Countless files have been studied, countless people have been heard. The result is always: There has been no political influence.”

But the case made headlines again in recent weeks.

State investigators probing the tax scam found more than 200,000 euros in cash in a safe deposit box belonging to a former Hamburg politician from Scholz’s social democrat party, said one person with direct knowledge of the inquiry.

Scholz has denied any knowledge of this cash or its origin and said he no longer has contact with the lawmaker involved. The lawmaker did not respond to a request for comment.

But the discovery, which was widely reported in the German media, has rekindled interest in the case and will heighten scrutiny of Scholz when he speaks on Friday.

Authorities seeking to hold individuals and institutions to account in one of Germany’s largest post-war frauds and claw back money for government coffers have raided the local offices of banks including Morgan Stanley, Bank of America and Barclays. The mastermind behind the complex tax ploy was extradited from Switzerland to stand trial in Germany.

Warburg said it had paid back required taxes. Morgan Stanley and Barclays declined to comment. Bank of America said it was cooperating with the authorities.

Lawmakers and officials say the effort is far from over.

“It will still take many years for Germany to work through this enormous tax fraud,” said Milan Pein, a member of a Hamburg parliament committee that will question Scholz.

Germany’s finance ministry, told Reuters last week that the nation’s 16 states had identified 3.9 billion euros in damages to taxpayers and that 1.8 billion euros had been or was in the process of being reclaimed.

But that government tally is almost two years old and experts say the actual damage could be far higher.

Christoph Spengel, Professor for International Taxation at the University of Mannheim and a member of the Advisory Board of the Finance Ministry, estimated the total damage at up to 10 billion euros and said that the practice of dividend stripping might still continue.

The Ministry of Finance in Hesse, home to the country’s financial capital of Frankfurt, says 30 banks owe 527 million euros and so far repaid 285 million euros.

The Finance Ministry of Bavaria told Reuters that they assessed a damage of 746 million euros caused by seven banks. Lenders have so far repaid 347 million euros.

LBBW, the biggest state-owned bank headquartered in Stuttgart, said it had paid back 166 million euro tax money it wrongfully claimed and received in 2007 and 2008.

In general, banks acted either as creditors for investors, brokered deals and cashed in on fees, or claimed back taxes they were not entitled to.

Prosecutors in Cologne have been especially aggressive in pursuing the case. A representative said that it is currently investigating 50 international and domestic financial institutions and brokers.

In 2020, two British bankers were handed suspended jail terms and one a 14 million euro penalty in the first criminal conviction in the case.

Earlier this year, another banker, a former employee of M.M. Warburg group, was handed a jail sentence. The judge said that as managing director of a Warburg investment company he helped set up two funds to profit from the transactions. read more