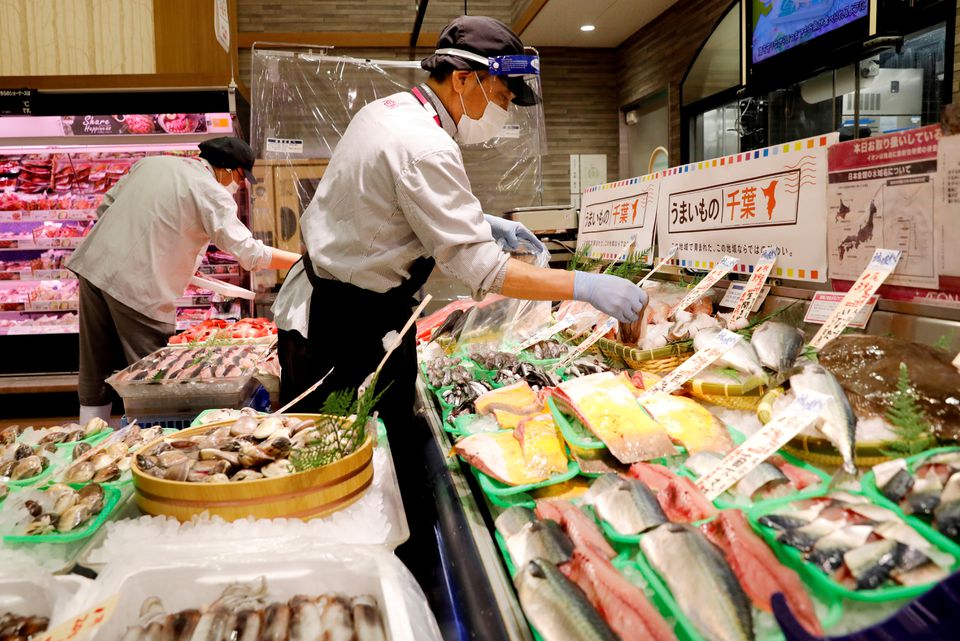 TOKYO, Aug 13 (Reuters) – Japan’s economy will grow this quarter at a much slower pace than previously expected as a resurgence in coronavirus infections is hurting the momentum for a recovery, a Reuters poll found.

But analysts forecast growth to speed up toward the year-end as hopes of a spending pickup amid a widening vaccine rollout will allow the economy to shake off the pandemic drag.

The economy was expected to grow an annualised 2.7% in the July-September quarter, according to the Aug. 2-11 poll of around 40 economists. That was much lower than a 4.2% expansion projected last month and 4.8% growth forecast in June.

The government will release a preliminary gross domestic product growth estimate for April-June on Monday, which analysts expected to come in at an annualised 0.5%. That was up a notch from an annualised 0.4% forecast last month, though the quarter-on-quarter growth forecast still came in unchanged at 0.1%.

A spike in Delta variant cases forced Japan to expand its COVID-19 emergency curbs during the Tokyo Olympic Games, as a record surge in cases strained hospitals in parts of the country and the health crisis weighed on spending by households.

“A delay in the recovery of private consumption, especially centred on the service industry, poses a downside risk to the economy,” said Barclays Securities economist Kazuma Maeda.

Japan’s economy shrank an annualised 3.9% in the first quarter and its recovery has lagged other advanced nations as a late vaccine rollout and lacklustre spending on services undermined the momentum.

Over 80% of analysts polled said the likelihood was high that new COVID-19 variants and the recent COVID-19 infection spike would delay the country’s economic recovery, with most of them expecting a delay of about three months.

“Surely the record number of cases will result in additional consumer caution and force the government to keep restrictions in place for longer,” said Marcel Thieliant, a senior economist at Capital Economics.

The median poll forecast showed economic growth would accelerate to an annualised 5.4% in October-December and come in at 3.2% in the first three months of the next year, up from 4.6% and 2.7%, respectively, projected last month.

Respondents were unanimous in saying the Bank of Japan (BOJ) would hold its short-term interest rate target at -0.1% and the 10-year bond yield target around 0% at its policy meeting on September 21-22.

Almost 90% of analysts in the poll expected the BOJ to unwind its ultra-easy monetary policy when it makes its next move, though they were divided about what the central bank would do if it were to eventually tighten its policy framework.

Most widely expected options were for the BOJ to adjust its forward guidance, raise the 10-year yield target, or do away with its negative rate policy and lift short-term interest rates, the poll showed, unchanged from last month.